Mostly, I just wanted to set up a thread about what might be our most interesting cousin, the gorillas.

What many don't know is that there are actually 4 species of Gorilla isolated from one another for long enough that they evolved some different traits. As you can see by the map there are four populations. Two species of gorilla (Western and Eastern) each with two sub-species. 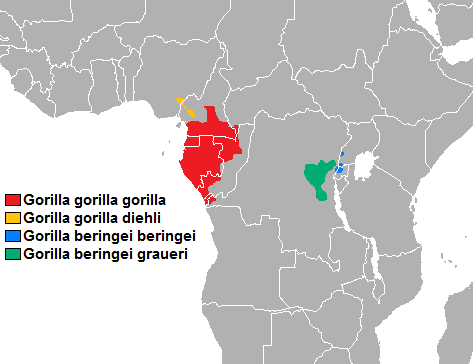 WESTERN LOWLAND GORILLA
The most common by far is the Western Lowland Gorilla, there are over 100,000 of them in the wild, and account for about 99.5% of all gorillas in zoos. This is also the sub-species that the famous gorillas all belong to including Koko, Shabani, and our own Donkey Kong. These are the smallest of the gorilla sub-species, standing around 1.8 meters (5 feet, 11 inches) in height; males weigh about 140 kg (310 pounds) although Silverbacks are generally larger weighing up to 190 kg. In captivity they have been known to suffer from severe obesity and reached weights of almost 400 kg largely from having fatty foods (such as large amounts of milk and cheese) added to their diet, which isn't natural for them; many don't realize because of their ferocious looking canines, but gorillas are vegetarian. Zoo gorillas today are typically much healthier than those in earlier times, but it is a controversial topic since much of the time their enclosures are set up so it is impossible for them to have privacy from zoo-goers.

CROSS RIVER GORILLA
Next are the Western Cross River gorilla. These were only discovered to be a separate sub-species in 1904, when it was noted that they lived outside the natural range and were shorter (at 1.75m) and had less pronounced features (smaller teeth, smaller head, etc...) and yet their large barrel chests and more rounded physiques actually meant they weighed considerably more than the average Western Lowland Gorilla, male Cross River gorillas weigh about 140-200 kg, or up to 420 pounds. Only one has ever been in a zoo, and she died in 2016 after 24 years. There are fewer than 300 of these left on earth, making them the most critically endangered type of ape. One thing that sets these gorillas apart from their Western Lowland cousins is that they live in very dense jungle; they also don't like people at all as a result of hunting. Their habitat has suffered fragmentation, and they are the fastest declining sub-species of ape in the world.

MOUNTAIN GORILLA
The Eastern Mountain Gorilla is known for its much bushier and longer hair. None have ever been successfully brought into captivity - and attempts have resulted in the gorillas being killed, and their babies that were taken did not survive. Otherwise, these gorillas are generally friendly to people in their territory who come peacefully. The male gorillas average weight is 155 kg, but silverbacks can reach 225kg, or 500 pounds. The Mountain Gorilla was almost wiped out entirely by hunting, reaching their lowest point at 254 individuals in 1981, but thanks to extreme protection measures, their numbers have rebounded to over 1000, making them the most successful sub-species of ape conservation in the world

EASTERN LOWLAND GORILLA
The Eastern Lowland gorilla (Grauer's Gorilla) is the largest sub-species of gorilla in the world, and also one of the most threatened. For example, when Park rangers interfered with illegal loggers, they loggers killed 10 Eastern Lowland gorillas in retaliation as a political statement. Their numbers have dropped from 17000 in 1995 to just 5000 today. Their future is less certain than even their much less numerous Mountain gorilla siblings. There are 24 Eastern Lowland gorillas in zoos, far less numerous than the Western lowland gorilla's 4000+, but they are the only other sub-species currently in captivity. Males average about 210 kg (460 pounds) and stand about 1.85 meters (6.1 feet). Silverbacks can stand up to 2 meters (6.6 feet) and weigh 250 kg (550 pounds).