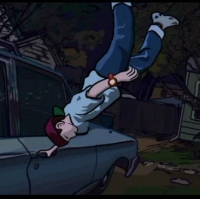 +/- can't tell much more since I haven't finished it

8) Peace Walker
+Fun gameplay with lots of replay value
+Decent story overall and cool themes regarding war and AI, the ending is pretty awesome
+Developing motherbase is fun enough
-Villains are forgettable
-The story is on the short side
-I found characters such as Paz and the french lady having ridiculous voice acting.
-Mechas and bosses make annoying sounds

5) Metal Gear 2: Solid Snake
+The game structure is very similar to MGS1
+Must be one of the first games with a long and coherent story with good character development
+Gameplay is innovative (MGS1 borrows a lot from it such as keycards, soliton radar, nikita, C4 and many more)
-8 or 16 bit graphics and sound, so no voice acting.

4) Sons of Liberty
+Hardcore philosophical themes towards the end.
+A huge improvement from MGS1 in every technical aspect.
+/- bosses are cool enough, but not the saga's strongest.
-Raiden can be annoying even when he has a cool backstory, Rose is even more annoying.
-The scenarios feel a little confined compared to other games.

3) Guns of Patriots
+Very nostalgic
+Cool dystopian plot elements and underlying themes
+Many beloved characters make a comeback after what felt like an eternity
-The flow of the game is somewhat irregular due to long cutscenes
-Sexiest bosses but with poor and cheap character development.

2) Snake Eater
+Emotional story with great plot twists
+Fun gameplay and extense world
+Cool portraying of a previous era
-Annoying gameplay elements such as healing system and camo
-Even though boss battles are cool (The End being awesome and innovative), the characters themselves are a little dull.

1) Metal Gear Solid
+Over the top plot with clones, cyborgs, cowboys, psychics, doppelgangers, shamans, evil twin, genetic engineering, nanotechnology, nukes and awesome plot twists, what else could anyone ask for?
+The best character development: friends, bosses and optional characters such as Nastasha have an extensive background and awesome dialogue.
+The largest supporting crew, every ally has something to say for most events in the game.
+Great music by TAPPY
+Realistic and natural voice acting
+Boss battles are innovative and gameplay is fun enough overall
+Revolutionary in many aspects (mainly narrative): way ahead of its time.
-Every technical aspect such as graphics, gameplay and sound quality haven't aged well.

Edit: Wow, that was long!