Movies Discussion - I wanna start watching anime, where do I start? - View Post 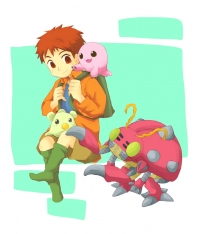 Watch "Now and Then, Here and There." I recommend English subtitles over the dub because the dub was a bit too theatrical for me. It's about a kid that gets thrown into a world where children are used as soldiers. The first episode gives the impression that it's going to be a predictable shounen series with a hot-headed protagonist, love interest, unbeatable rival, etc. but it quickly flips over after the first episode when he gets sent off.

I will say, however, that there isn't much conspiracy as much as there is war, corruption, and chaos. It's one of the most emotionally powerful shows you'll ever watch, period.  A few characters will come off as black/white (though they are still played, written, and fit excellently into the world) and there isn't too much backstory for characters that you might expect to have one, but it's a strongly-written anime that makes the best out of its 13 episodes. No filler, no drawn-out fights, no "I'm going to pull out a secret attack that wasn't hinted at before and bullshit my way through fights" or any of the usual unintelligent anime tropes you see everywhere.

I also highly recommend Shinsekai Yori. It's a sharply paced post-apocalyptic anime, though you might find the first episode or so to be confusing because of poor narrative choices. There's very little war aside from a few moments where a bunch of things are killed, but it has a decent amount of conspiracy from the get-go regarding the society that the protagonists are raised in. Character development isn't the best and the pacing goes off towards the final arc, but it is by far the best anime of 2013 and one of the most intelligently written anime of the decade (though it was adapted from a novel, so that's probably why).