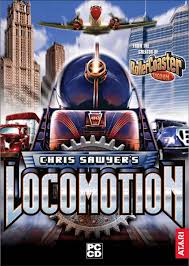 Now I don't think many people have played this game here. I've spent hundreds of hours on this game.

Its so fun setting up your own transportation Empire....from trams, bus routes, airlines, trains, ships......ALL IN ONE WORLD that is all real time......but the most addictive thing was probably delivering resources to different places (which in turn produced more resources) and delivering those new resources else where.

Your able to start the game in the 1920's...over time new models of vehicles come in and so on....so it keeps on changing. City's continue to grow through the years....eventually you can build more than 1 station in the city's. Its so awesome.

Don't really remember many songs from it though...