What if Xenoblade X was always supposed to have been the series that connects all the other series together, Gears, Saga, and Blade. It would make sense given it's name and numerous nods to all the other games in the series and the choice to name the series Cross (X). It could easily be an alternate dimension where they all essentially wind up (the flash of white light before entering space with Planet Mira). It may have even been the intention all along as Bandai had been working with Monolith Soft on projects before such as Project X Zone/2 and had recently spoke of their desire to revisit Saga while working on that game series (in which the same time period they were working on Blade X).

Yeah it's a long shot, but one I'd love to see come to fruition.

I never played Xenosaga nor Xenogears, but hasn't Xenoblade 2 more connection to these games than X does?

If you never played the first two series how do you know? I would disagree.

I think it depends on what role the wave-existence and Zohar/Conduit play in Xenoblade Chronicles X's hopeful sequels. After Xenoblade 2, I am much more convinced that X is somehow related to the other Xenoblade games. There seems to be a long-term plan for the series lore, but it is given to us in self-contained segments so that we don't feel disappointed if the series ends for budget reasons and so each game is good on its own right.

Before X released, it was said in an Iwata Asks that Takahashi wrote almost a novel for its story. What we got seems to be just a small portion of that.

**Hinted Spoilers In Speculation below***

I think Xenoblade X (and Xenoblade I/II) are suppose to be a re-imagining of what happened in Xenogears Episode I (humanity leaves Lost Jerusalem) and somehow the Zohar/Conduit is on Mira influencing who comes to it and what happens. The Zohar/Conduit acts as the bridge between different time periods. The Homs might be related to the Samaarians.

I just don't know how they will connect Xenoblade X with Xenoblade I/II's backstory, unless maybe Earth wasn't destroyed in Xenoblade X like we are led to believe at the start of the game. We know that the mimeosome's memories can be manipulated. Who's to say their memory of Earth's destruction is 100% reliable?

I mean objectively has more of a connection to the original XC because of the ending, and it connects to Xenosaga more too because of KOS-MOS.

You don't need to have played the first two series to notice how that slants the argument in XC2's favor. Did XCX have literal characters from any game outside of itself? Nods are one thing, but what XC2 has are not nods.

By the way somebody posted this from Xenoblade Chronicles X opening cut scene. Probably a stretch and that is just an alien ship that looks like a tree? 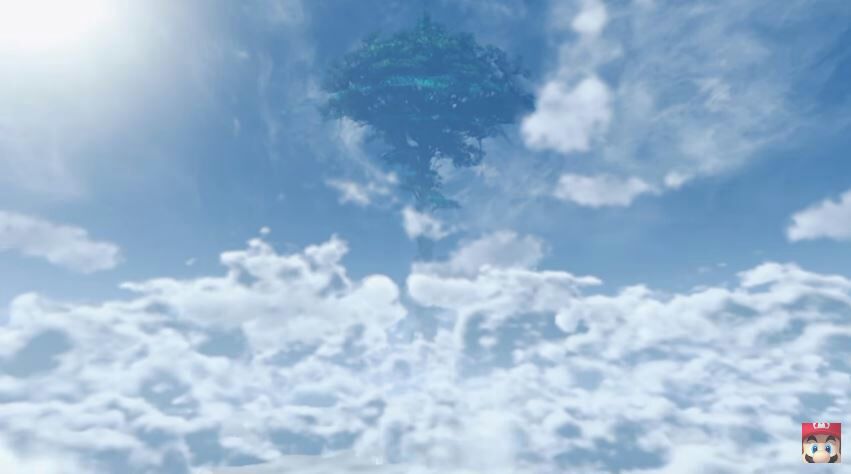 Yeah but that's literally all it has, and no other connection. 1 single character, and no other reference really outside the Zohar which makes an appearance in one form or another in all the games. It is even impossible to be the same Kosmos for reasons I can get into, but figure for those who played they probably know.

There is an Iwata asks that shows how so much of the story was cut and how originally there was a real MC, not a CAC. The reason is that of online and the open world. There is also a suggestion the other whale shio crashed on the other side of the planet inthe Art of Mira book.

You know that you can read about the games on what is called the internet? No need to play it.

So far, the Zohar makes an appearance in xb2 which is called the conduit. In the universe of XC2 that thing is still a mystery and acts as a dimensional gate. Also gives you  the  power of a God by creating a new universe. At least that happened to Klaus in both dimensions, Meyneth (don't remember her human name) and the AI which is Alvis.

According to xenogears wiki:

The Zohar serves as a portal between the Upper Domain of U-DO ("God") and the Lower Domain of the human collective consciousness (Unus Mundus), and could be seen as a "window to contact U-DO/God". The Zohar is described as "a source of infinite energy". It powers Zarathustra, which resets the universe to a blank slate for Eternal Recurrence; therefore, the Zohar is a requirement for Wilhelm to achieve his goal.

It resetted the universe in x1 and x2 or rather destroyed it and also created new ones.

Ontos disappeared in XC2. Rumor says it could be Alvis, or something completely different. Maybe the story DLC will enlighten us on this, or a sequel to XC2 will further build upon that idea. So far, I see more connection to his previous work on this game than the entirety of X.

No, it's not a tree. It's one of the giant spaceships fighting the other alien race.