NYT : "Trump Jr. Was Told in Email of Russian Effort to Aid Campaign"

WASHINGTON — Before arranging a meeting with a Kremlin-connected Russian lawyer he believed would offer him compromising information about Hillary Clinton, Donald Trump Jr. was informed in an email that the material was part of a Russian government effort to aid his father’s candidacy, according to three people with knowledge of the email.

The email to the younger Mr. Trump was sent by Rob Goldstone, a publicist and former British tabloid reporter who helped broker the June 2016 meeting. In a statement on Sunday, Mr. Trump acknowledged that he was interested in receiving damaging information about Mrs. Clinton, but gave no indication that he thought the lawyer might have been a Kremlin proxy.

Mr. Goldstone’s message, as described to The New York Times by the three people, indicates that the Russian government was the source of the potentially damaging information. It does not elaborate on the wider effort by Moscow to help the Trump campaign.

The Times first reported on the existence of the meeting on Saturday, and a fuller picture has emerged in subsequent days.

Alan Futerfas, the lawyer for the younger Mr. Trump, said his client had done nothing wrong but pledged to work with investigators if contacted.

“In my view, this is much ado about nothing. During this busy period, Robert Goldstone contacted Don Jr. in an email and suggested that people had information concerning alleged wrongdoing by Democratic Party front-runner, Hillary Clinton, in her dealings with Russia,” he told The Times in an email on Monday. “Don Jr.’s takeaway from this communication was that someone had information potentially helpful to the campaign and it was coming from someone he knew. Don Jr. had no knowledge as to what specific information, if any, would be discussed.”

It is unclear whether Mr. Goldstone had direct knowledge of the origin of the damaging material. One person who was briefed on the emails said it appeared that he was passing along information that had been passed through several others.

Jared Kushner, Mr. Trump’s son-in-law, and Paul J. Manafort, the campaign chairman at the time, also attended the June 2016 meeting in New York. Representatives for Mr. Kushner referred requests for comments back to an earlier statement, which said he had voluntarily disclosed the meeting to the federal government. He has deferred questions on the content of the meeting to Donald Trump Jr.

In a series of tweets, the president’s son insisted he had done what anyone connected to a political campaign would have done — hear out potentially damaging information about an opponent. He maintained that his various statements about the meeting were not in conflict.

“Obviously I’m the first person on a campaign to ever take a meeting to hear info about an opponent... went nowhere but had to listen,” he wrote in one tweet. In another, he added, “No inconsistency in statements, meeting ended up being primarily about adoptions. In response to further Q’s I simply provided more details.”

On Monday, after news reports that he had hired a lawyer, he indicated in a tweet that he would be open to speaking to the Senate Intelligence Committee, one of the congressional panels investigating Russian meddling in the election. “Happy to work with the committee to pass on what I know,” the younger Mr. Trump wrote.

Mr. Goldstone represents the Russian pop star Emin Agalarov, whose father was President Trump’s business partner in bringing the Miss Universe pageant to Moscow in 2013. In an interview Monday, Mr. Goldstone said he was asked by Mr. Agalarov to set up the meeting with Donald Trump Jr. and the Russian lawyer, Natalia Veselnitskaya.

“He said, ‘I’m told she has information about illegal campaign contributions to the D.N.C.,’” Mr. Goldstone recalled, referring to the Democratic National Committee. He said he then emailed Donald Trump Jr., outlining what the lawyer purported to have.

But Mr. Goldstone, who wrote the email over a year ago, denied any knowledge of involvement by the Russian government in the matter, saying that never dawned on him. “Never, never ever,” he said. Later, after the email was described to The Times, efforts to reach him for further comment were unsuccessful.

In the interview, he said it was his understanding that Ms. Veselnitskaya was simply a “private citizen” for whom Mr. Agalarov wanted to do a favor. He also said he did not know whether Mr. Agalarov’s father, Aras Agalarov, a Moscow real estate tycoon known to be close to President Vladimir V. Putin of Russia, was involved.

Is this finally the thing that proves collusion was actually takeing place?

He was informed in the email that the material was part of a Russian government effort to aid his father’s candidacy.

She was hired to do this by Mr. Goldstone, on behalf of Mr. Agalarov (who's father Moscow real estate tycoon known to be close to President Vladimir V.)

3) Trump Jr. at first said the meeting was "mostly about adoption of russian orphans", but lateron said he knew before hand it was about "damageing information", but said its okay because she "didnt have anything real".

However is simply showing up, knowing the damageing information comes from another country trying to effect the election, enough?

Do they have to prove he actually got handed something from her, that was then used?

other side of the coin news: i thought he said he never met any Russians. lmao

I remember when Paul Manafort's Russia connections surfaced. I figured that would be the straw that broke the camel's back. For all of Trump's know-nothingness and dog-whistling, at the very least he seemed to prize American independence. But Trump endured that scandal and now here we are with the commander-in-chief (and apparently his son) cozying up to a foreign power with geopolitical interests clearly at odds with our own.

The Russian government meddled in American elections. That fact alone is scary and infuriating. Then you have an American president with a blind spot for Russia the size of an aircraft carrier, who takes the word of an autocrat with a deplorable human rights record because he feeds the president's narcissism. That fact is terrifying.

I never thought I'd ever see the head of the executive branch of the United States government put American sovereignty in jeopardy for the glorification of his massive ego.

"Anonymous sources told us" - story is already being retracted as fake ... 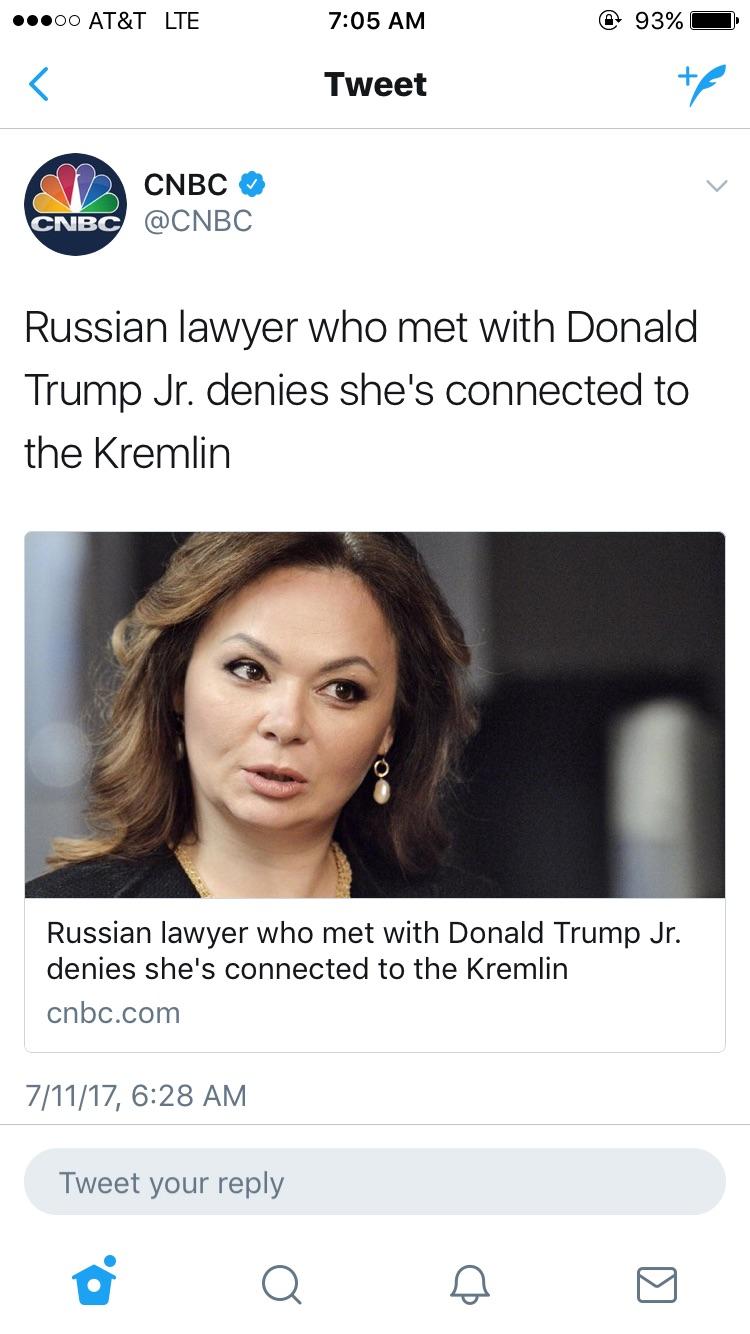 Bonus: Here is a picture of Trump Jr meeting with a Russian Admiral 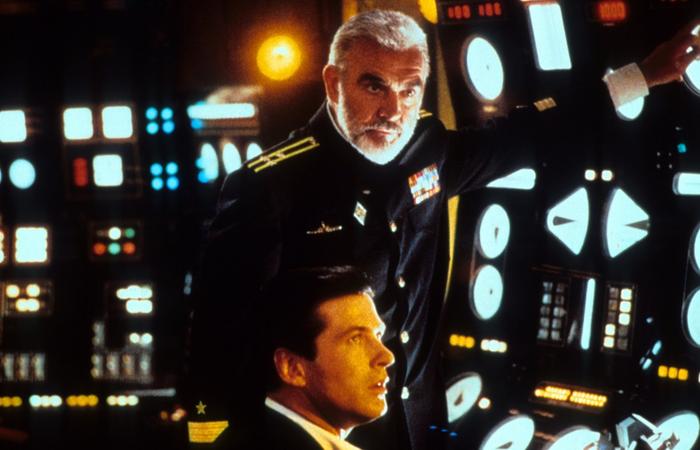 It's kinda sad that you have to grasp thin straws like these in an effort to impeach the president instead of just using the obvious undeniable fact that the president is an incompetent moron.

Also for not having any contact to Russians the Trump family and campaingn surely have a lot of Russian contacts.

Of course she would say it's not true, even if it were true. And even so, maybe you should actually look into what you're posting.

Veselnitskaya said she did not know why Trump Jr. believed she was planning to offer damaging information about Clinton.

"It is quite possible that maybe they were longing for such information," she told NBC. "They wanted it so badly that they could only hear the thought that they wanted."

She said Trump Jr. asked her just one question: whether she had financial records indicating inappropriate donations to the Democratic National Committee.

In other words, the intentions of Trump Jr. were to find dirt on Hillary Clinton from the Russians in order to damage her campaign, which is illegal.

Lets see what Donald Trump Jr. has to say:

“Obviously I’m the first person on a campaign to ever take a meeting to hear info about an opponent... went nowhere but had to listen,”  - Donald Trump Jr.

Theres a Tweet that proves he went there, with the intent to get damageing information by HIMSELF (anonymous sources my arse)

Why did he admit to it? if its just all fake news?

Here's my statement and the full email chain pic.twitter.com/x050r5n5LQ