Forums - Nintendo Discussion - Why I don't like the Joy-Cons Yeah, the joycons are gonna suck as standalone controllers. There are still advantages to removeable controls, though.

1. It allows the Switch to function as a standalone tablet, If Nintendo is smart enough to include a proper browser, Youtube,Netlflix support, and a low power mode for inproved battery during non gaming tasks, can see this replacing my Android Tablet for most uses.

2. The removeable controllers will make it easier to fit into a purse, bookbag, or even large pants pockets.

3. It theoretically means the joycons in there current form could be replaced with a different design down the line.

4. Smash Bros has a tendency to ruin joysticks. It would be incredibly shortsighted of them to put that game on a handheld with non-replaceable controls. Replacing a joy-con will be as simple as sliding out the old one and putting in the new. That alone is enough justification for the added cost, if you ask me. Joycons look to be about 4" wide. SNES controller was about 5" wide. The original Gameboy was about 3.8" wide.

Which begs the question - was the SNES controller or Gameboy that uncomfortable to hold? Not perfect - but not the worst from what I remember. Certainly bearable when the game is really good...

Don't feel bad I thought the same thing, I almost suggested he change his avatar from Cobra Commander to a transformer.

Well, size does matter and your comparison is flawed because you're only using one side to make that comparison. The GameBoy could be less wide, but it was also much thicker, allowing our hands to hold it easier. And the SNES was not only 1 inch wider, which is a lot in this case, but (looking at pictures) it's also taller and rounder around the edges, again making it easier to hold.

Just reminds me of the old Playstation one controller

If you ever used one of these things, was awful.

Nope, never saw that, but it does make me remember a one handed controler I had for either PS1 or PS2 (that thing has to be in my house somewhere) it was for playing RPG's mostly and I forgot how much i liked it. 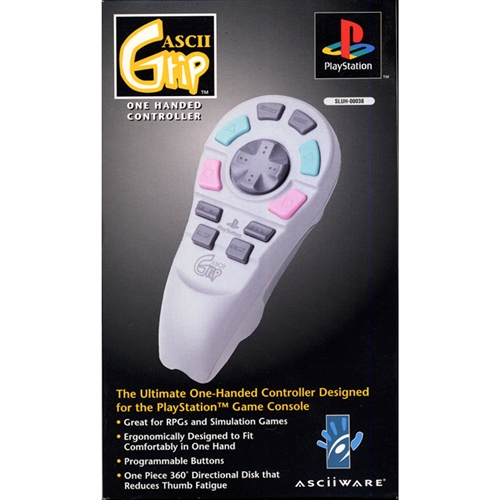 From what I can tell of the videos, they do look rather uncomfortable when playing more so when playing with a friend. It seems more of a gimmick to me.

Yes, but the face buttons an d-pad were on the side, not in the center.  Try holding an NES controller and hold either your left hand or right hand in the center rather than the edge, and press buttons.  This is the bigger problem than the size.

And no N64 is not a counter example.  That had a center grip.

Next take a Xbone or PS4 and try controlling as if stick were directly under the buttons.  That shows the problems with the grip controller.

It's not hard to test the comfort in either scenario.

So joy-cons and grip controller will both be unsatisfactory control options, so again, what is the point?  I guess stand alone tablet could be useful if it is fully functional.  I have my doubts Nintendo could pull of a workable UI.

Also, Wii mote style functionality could be useful as well.  I'd be interested to understand the mechanics of how that would work on go and home (what replaces the sensor bar in both cases)?