I wonder if it will run proper at 1080p on PC? When I play on Switch I almost always play in handheld mode because the game seems to run at 720p. If I play on my TV the text starts to get blurry.

I'm interested in the prequel, due to this character, Herminia: 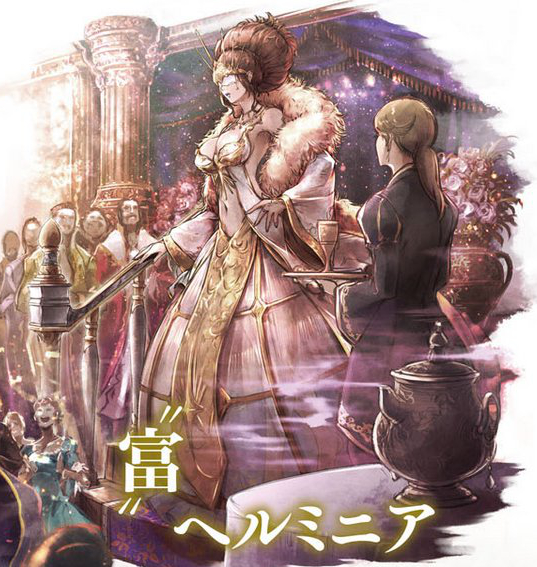 Seems like their official Twitter shared her boss battle theme too, she got some atmospheric vibe going on.

Yeah, that's where I saw her.
Haven't played the original game (yet), but I'll check out the prequel. I hope they add her as a guest character in FFBE, like they did with some of the characters from the original.

And yeah, her the theme is pretty nice too.

While size is a factor, I try to avoid buying digital on eShop if I can. Digital marketplaces on consoles need more staying power than they do.

Because Nintendo assisted in its publishing. Maybe a few years later down the road.

Well for starters it's not a platform I'm interested in gaming on or buying at all. I just have a cheap $30 smartphone, so it would probably run terribly on my phone. I don't want to pay a ton of money for a "plan", so that I can pay off some $600 device in installments, and I definitely don't want a data package. 90% of Smartphones are these fragile little devices with glass screens that shatter if you drop them. Then there's the planned obsolescence built into them. They are made to break, just in time for you to buy a new phone and sign up for a new plan in a couple years. I'd rather not spend $600 or even $200 on that.

Then there's the fact that most Smartphone games have ads, or micro-transactions or some other annoying way to get you to pay for something that is "free". Whatever it is they implement to get money out of it, makes the game less fun as a whole.

Touch controls are junk on their own. They are slower to use than a standard controller, and using your finger partially covers the screen you are trying to look at. Dedicated buttons are a must.

Edit: I have played many DS/3DS games that implemented touch controls. A couple of them like Canvas Curse, and Phantom Hourglass were almost entirely touch controls. But that's Nintendo, and they are just better at making games than everyone else.

Smartphone games are often simplified to the point of just being bad games. Especially games based on successful video game franchises. Just look at All the Bravest, Super Mario Run, and Poke'Mon Go.

Anyway, I hope this helps you understand why I don't want Octopath: All the Bravest/Go Edition.

I see, that is quite a shame that you wont experience the glory that is Final Fantasy Record Keeper!

I will never play a game with randomized mechanics that you have to pay real money for. I spent over a decade playing CCGs. Buying packs just to find rare cards to win with. Dropping hundreds on booster sets. Then I discovered how many board games and strategy games come complete in a box for $50. Collectible card games like Magic and Yu Gi Oh are overpriced and poorly designed compared to the likes of Betrayal, Catan, or Terraforming Mars. The same is true for traditional games vs games with Gacha or MTS mechanics.