Shhh... not long now.
Tune in for the #Battlefield V reveal on May 23: https://t.co/kpTnOyxuxr pic.twitter.com/zzIwGi0Y1w 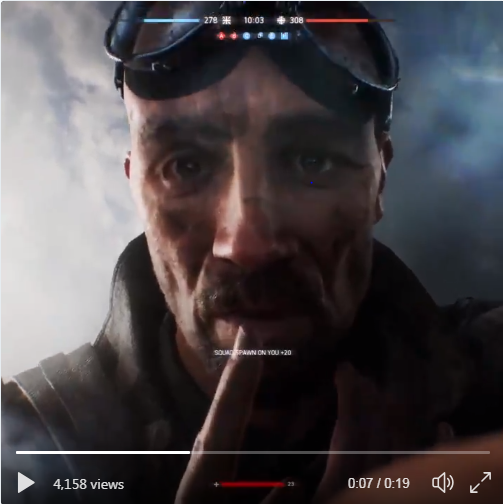 The British Union Jack and the Nazi Iron Cross are the team icons for the multiplayer.

Disappointed with the setting choice, especially since the EA/DICE marketing team teased it would be a brand new setting for the Battlefield series. The wait continues for a good modern shooter, CoD and Battlefield both failed to deliver one this year. Please Infinity Ward, be making Modern Warfare 4 for next year (some old Infinity Ward devs who left Infinity Ward in 2010, just left Respawn and rejoined Infinity Ward).

I thought that V is  Vietnam.

I thought that V is  Vendetta. LMAO

Yeah, the usage of V instead of 5, as well as the ESRB rating mentioning drug use (the first in the series to mention drug use), had alot of people expecting Vietnam. On top of that, the EA/DICE marketing team had teased a brand new setting for the franchise on the official Battlefield website, so alot of people were hoping for the Korean War, the only major war in the 20th century to have not had a video game based on it so far.

All up for WW2, Korean, Vietnam or sovjet afghan War in the game

What would be a new setting?.

We had Nam in Bad Company 2, in the form of DLC, going back to it with more nam based maps and a nam based campaign wouldn't exactly count as being "never done before".

We've had other games touch upon Russia, Germany, United Kingdom, Japan, and the USA. What we haven't seen touched upon are the wars in China, Korea, Italy, Poland etc.

I would honestly want something new, or at the very least, a popular war, rather than one that wasn't popular, involved a fuck ton of Napalm and involved the US losing said war. We know how WWII went for sure, but we also very much knew how Nam went, and especially how that ended.

I was hoping for the Korean War personally since no game has ever done it, but would have preferred Vietnam over WW2.

I just wish the marketing team would have been honest with us from the start, instead of teasing a new setting and giving a WW2 game a name that breaks naming convention.

No,  Already in march people reported that the game will be set in WWII with V for victory.    A new setting probably locations we never been to or new modes like battle royale.

well that sucks, i will still buy it, but hey at least i will get my modern Battlefield on PS5 now.