Well he is 29 and you'll never know when he'll lose the motivation to win more. The FO is the major hurdle like Federer before him. IMO what separates Djokovic from Nadal and Federer is he is the balance between them. Athleticism vs Technique. May not be as elegant as Fed or as powerful as Nadal but he gets the job done. Like a Mueller of Tennis. IMO. Not the flashiest of all but totally efficient and gets the job done.

I think the real question is why is Murray even in the conversation with the other 3? It's clearly been a BIG 3 this generation, not a BIG 4. Murray isn't on their level. Wawrinka has just as many slams. He and Murray are 2nd tier.

As for the OP, Novak is incredible, but a lot of this is timing. As others have said, Nadal and Federer are on the way out, and had each other to contend with, with an almost complete overlap in their primes. Federer would have at least a couple Calendar slams and probably 20+ if Nadal hadn't been around, and Nadal would undoubtedly have more slams too if not for Federer. Nadal is unlucky because as soon as he cracked Federer's dominance, Djokovic ascended, so he had constant overlap with two incredibly strong rivals during his peak. Novak is possibly (likely) going to exceed both Fed and Rafa in slams, weeks at #1, etc., but a fairly large part of that is the luck of timing with both of them being past their prime and nobody else stepping up yet. Novak's getting close to 30 and that WILL affect his game, but unless some of the younger players start having some belief, he'll still get some freebies when he's over 30 just because there's nobody to challenge him.

All this being said, I have insane respect for Djokovic, Nadal, and Federer. It's truly been a legendary generation. Probably the greatest ever, in my opinion. Will be interesting to see which guys step up to take their place. And cool to have Serena making history on the women's side--though I realize that's a whole other discussion in and of itself.

Amazing that this guy was behind them for a long time and seemed like that was his peak. Kudos for never giving up

Yes, but not consecutively?

Djokovic has a tie-record of 6 Australian Open wins and we also have to consider that is also one if not the toughest to win how early on the season that GS competition begins and the extreme temperature compared to the GS situated in the upper hemispheres. That's not an easy accomplishment.

Maybe the reason the new younguns aren't becoming champions is simply because the current world no. 1 is not injuring himself every after clay season. Most of these kids studied Nadal and Federer but haven't found a way to beat Novak yet as they simply lack the experience that Murray or Stan  had to completely take out Nole out of his game.

How does that make it any harder exactly? Everybody has to play in the same conditions...

I'm just gonna say that I don't wanna offend you but I have to cause what you said don't make any sense at all relating to what you bolded in my post.

Unless Wimbledon started growing razor sharp grass in one side of the court or RG gets quick sand just for Nadal as some kind of handicap, then all competitions are equal regardess of the surface. Matches however could get different results even if you're the better player because you just can't handle the heat.People have different perception of heat and how much they can take it. Conditions like that could give you advantage or disadvantage depending on your heat threshold or your immune system.

Honestly that just seems like a poor excuse to me. 'oh I only lost because it was too hot, otherwise I would have beat you'.

Regardless, New York during the US Open is on average hotter than Melbourne during the Aussie Open anyway...

If you need proof then go through here. 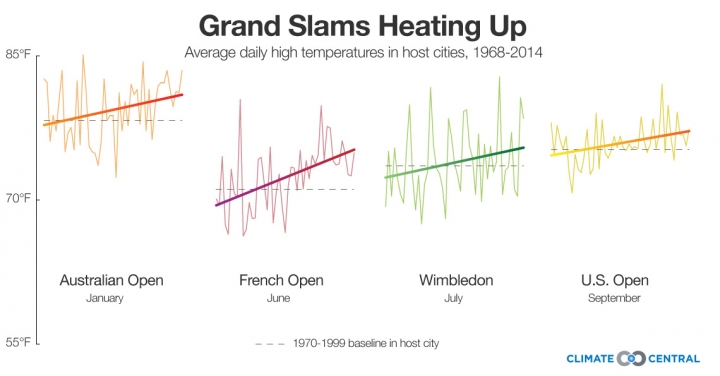 REALLY? You must be living in good weather or air-conditioned home if you think that's something a tennis player has to deal with. Athletes are not superhuman.

That's not an excuse. Heat exhaustion or stroke could destroy your body and mind. It could even cause death. I'm just not sure were you are going anymore considering 40 degrees centigrade is above normal body temperature.

It doesn't matter. He is still behind Federer, Sampras and Nadal in number of GS won. And if Im not mistakes his victory record is still behind Nadal and a lot behind Federer who's won over 1000 official games.
He can still be the greatest in history, at least by the numbers, he s just not there yet.