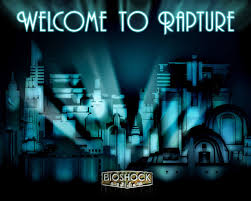 With Bioshock Infinite on the way it seems right to review the Bioshock games. I will start with Bioshock 1 and here is my Unbiased Review-

You will start at a place called Rapture which is an underground city created by a crazy person named Andrew Ryan.  In the time of the first chapter you will learn how to use plasmids (this games equivalent of magic powers), meet splicers (enemies), meet a big daddy, meet a little sister & listen to a person called Atlas.  During the chapter you will understand more of Rapture but you will wonder why your airplane crashed or who is Atlas and it will get explained later in the story so no worries there but I won’t tell you because that is for you to find out.  How did the beginning do?  It did really well.  It did set the story for the game and there will be a curve ball later on but I won’t say what that is.

After the beginning is over you will have to listen to atlas through the story.  There are two main people you will have to kill which you will find out in the story and there will be several stuff to find (it will get explained later on in this review).  This game has a Steampunk feel to it which it is kind of cool.  You will meet people which most of them are crazy but they are still interesting.  The length of this game is about six to nine hours (depends on difficulty and how many times you die) without trying to find stuff or explore but if you include trying to find the stuff, explore and play the story you will have about 10+ hours’ worth of playtime and it is a good length overall.  The problem I find is the story is a bit repetitive at times (very little though).  The mission is when you have to take pictures for a guy in Fort Frolic four times on four people (one picture per kill) and to me that is a bit repetitive.  I can only think of one more mission and that is the time when you have to put together some EMP which makes you go in a room and grab something, go in another room and get two items, and go find or kill four big daddy’s to loot them of something you need.  That is the two missions to me that feels a bit repetitive but other than that, it is great.

The ending boss was medium.  It depends really what plasmids you equipped and what difficulty you chose but the boss was good nonetheless.  After you do kill the boss, it will enter into the ending cutscene.  It was a good ending and a sad one at the same time.  It felt like it was worth going through the game to get to this point because they put effort into the ending than some others that don’t even try which will be unnamed.

Overall it is great and can be played multiple times.  It is a great experience and you won’t be disappointed.  Rapture alone feels like it is a real place and I think it has a great story that puts you into the action at the very beginning.  Irrational Games did a great job and I applaud them for the experience that I had.

Irrational Games did a great job with the gameplay.

The Good: The controls are easy to understand.  Hacking is challenging (It is easy at the beginning but it starts to get harder in the middle) because you need to act fast before the gel (or whatever it is) reaches the end of the tube but think of it like a puzzle, the tubes are the puzzle pieces and gel is the timer.  Researching enemies will give you bonuses like extra damage or a tonic and more so it will be a good idea if you research them.  Invent items like ammo or tonics which it is good to do.  Trying to find audio logs & weapon upgrade stations is hard to look for which makes you explore the area and you could get lost sometimes or forgot what area you were going to search next which happened to me sometimes. You will have a choice to save little sisters (the good thing to do) or harvest the little sisters (the bad thing to do).   You will be able to play as the big daddy which it is fun and a pain at the same time.  The fun part is being the big daddy and the pain part is you will walk pretty slow, not ultra-slow, just slow.  Decide which plasmids/tonics you want to equip so it will play the way you like it.  For example, want to get up close and personal? Equip wrench jokey.  Want to hack like crazy?  Equip slow. It will go on and on.

The Bad:  There is no running button which is a pain when I need to go back for something that I forgot and it could take a long time to get around.  The ammo is scarce. You will lose more ammo than gain so you will have to buy it most of the time which it is pretty expensive to buy.  You can only hold $500 which is a pain because I usually like to save up money when I need it the most.  Like if I needed health packs and ammo the most I will be guaranteed to be able to afford it.  It is just me probably but I wish you could hold $1000 because everything is expensive in this game. It is not a big deal at all though. It is a small problem.

Overall they did a great job with the gameplay.  There may have been a few problems but there are more goods like it should be.

Irrational games did well with the presentation.

The Good:  The main menu and its background look good and every time you go down or up you will hear piano noises which is actually quite entertaining a little bit.  The water effects are good (which it should be because this whole game is based inside the ocean).  The textures are good for a 2008 (2007 for Xbox) game which I was surprised.  The music is good and some of it actually gets your heart pumping (not in a scary way but in excitement or anxiety).  The gun sounds are good, the voice acting is great, and the enemies are well designed which is great for a game that was made in 2008 (2007 for Xbox).

The Bad: There are a few glitches like a weapon floating or some random invisible wall glitch which happened once for the whole game. There were other glitches but they were mini glitches.  There are a few framerate issues but it only happened when the game would come out of loading and happened the most near the end so it will have no big effect on the score.  The big problem with me is the long loading times.  It took 30 seconds to a minute to load each area which it gets annoying after a while.

Overall they did a great job with the presentation even with the problems it had which alone was small.

They did a great job with this genre.

The Good:  There is a good selection of weapons they will give you like shotguns & Wrench to go up close and personal, pistol and chemical gun for short to medium distance, Machine gun & grenade launchers for short to long distance (to make it safe for grenade launchers to be short distance, you have to get an upgrade that you won’t get harmed by the grenades that it launches), and a crossbow for short to long distance. The Selection may be small but it is still good nonetheless. There are a good amount of upgrades for the weapons (2 per weapon) which equals to a grand total of 14 upgrades which alone will be fun to search for the upgrade stations.  The secondary ammo is good like make bullets put people on fire or have heat seeking missiles or have penetration ammo and more.  There is a good amount of plasmids/tonics that it will make it tough for you to choose which one to equip.   This game does have a lot of action parts which is great for a shooter. Once you begin this game there will be non-stop action that you won’t be able to stop until the end of the game and that is amazing.

The Bad:  The damage ratio feels a bit off in this game.  Like shotguns don’t do a lot of damage to nitro splicers and sometimes a lot of the enemies can barely get hurt by the machine gun.

Overall they did a great job.  I am surprised how good they did it at the time when they made it.

I felt that irrational games put their heart and soul into this game and it is amazing how that is possible because I never felt like that for a long time now.  It is a must play game and it deserves the score I am giving it.  It is a wonderful experience and I bet you will enjoy it too if you haven’t tried it before. 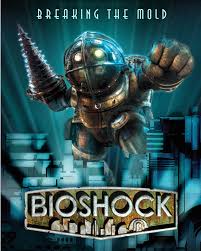 great review bro! Bioshock is def one of the best new ips of this gen :)

Definitely a breath of fresh air for the genre and one of the more inventive new IPs this generation. I just wish we'd had more like BioShock and less like CoD. Nice review.

It's an excellent game. So is number 2, so much so that I'm scared that Infinite looks different and won't be as good. Ha anyone else thought this?

Bioshock atcually has a 96 on metacritic so this is lower than the average.  Of course that was years ago but still lol

yea i enjoyed it much. i got lost, and was playing relief for others, so getting lost in both one (i think Metacritic got it right) and 2 (which i'd personaly give an 8.5/10) sould surprise u, but i enjoyed it.

i had typed to high before i saw the final score lol. i say the story score lol. i was poking a bit of fun at the reviewer, because of our interaction in his last review.

Personally ive never been a big fan of Bioshock.  I dont know why but I never beat it.  I usually play it for the first 30 minutes and then never touch it again.  Ive done this multiple times too -_-

i gues it is huh lol  the 360 and PC version is a 96 but i believe it came out late on ps3.  hmm.  Anyways I thought your review was great and we will miss you while your out for a month :) Looking forward to Bioshock 2 and Bioshock Infinite reviews as well