Veteran soldiers suicides why is this big issue still not solved?

This is a hard one to get a handle on.  It's 21 percent higher than civilians.  How much is linked directly with being in the military and how much has to do with recruiting people with a higher risk?  Is it because of service or is it because of people having trouble adjusting when they leave?  Not enough information in these little news blurbs, really.

At least read the article.

"And roughly 65 percent of all veteran suicides in 2014 were for individuals 50 years or older, many of whom spent little or no time fighting in the most recent wars."

And what's the lack of proper healthcare?  70 percent of those who committed suicide were not regular users of VA healthcare.  What exactly do you think they should do about it?

Also, reputable source on Obama trying to "do away with vets' healthcare".

Not much they can do, these people are what they are. Id bet Average jar head would at some pit commit suicide, military service just intensifies their problems the issues they already had.

These days people just don't have the mental fortitude to do such things, Gramps was in ww2 and then worked the fields 14 hours a day 7 days a week till he was in his mid 70s and lives till 80 something. Modern snowflakes would off them selves after about a week of his life.

I appreciate them fine but I prefer to be honest and practical about what is causing this sort of stuff. I'll elaborate a bit more. American society bashes violence all the way from the weakest form of it to the highest. In other words, as a general rule, modern society conditions us to not be violent with the aim to erase violent tendacies from people (not possible) but it sensitizes them to it. When we have to commit violence, our minds have a harder time coping with the stark reality to what we were taught and we see then finally accepting it. It's called conditioning.

A person who's born into a country where's it is in a state of war constantly would be conditioned to that way of life and would have have less qualms/issues with being violent to others compared to a person who was raised in the states and conditioned to not even defend themselves. I think that the mental unstabliness of US soldiers is an adverse effect of that. Before you try to say that the US is always in a state of war, american society doesn't experience war in person. There's a world of difference between witnessing and living it in person compared to watching it on cnn for a few mins. Anyway, the suicides are likely their way of coping with what they experienced and not being able to conform back into society. I consider US troops mentally soft but I don't mean that as a slur but rather as a point of fact when you compare the stock (people) where those troops come from compared to people in other countries that are at war alot.

In cause you still want to debate that US troops are soft and that likely leads to them having more mental issues afterwards, do you know what stress cards are?

This was pure gold and so true.

I was in a hurry earlier, trying to get a post in before dinner. Where's the link to the study so I can look at this myself? I didn't see one in the article or the name of the study. He did lower the healthcare for the military but I was wrong about obama doing away with vets healthcare completely.

I guess I see your point more now.

In any case, the US could use an adventure abroad less.

Not just because of war... Japan is still leading the statistics (if the statistics are really comparable in cases between suicide and accidental death) 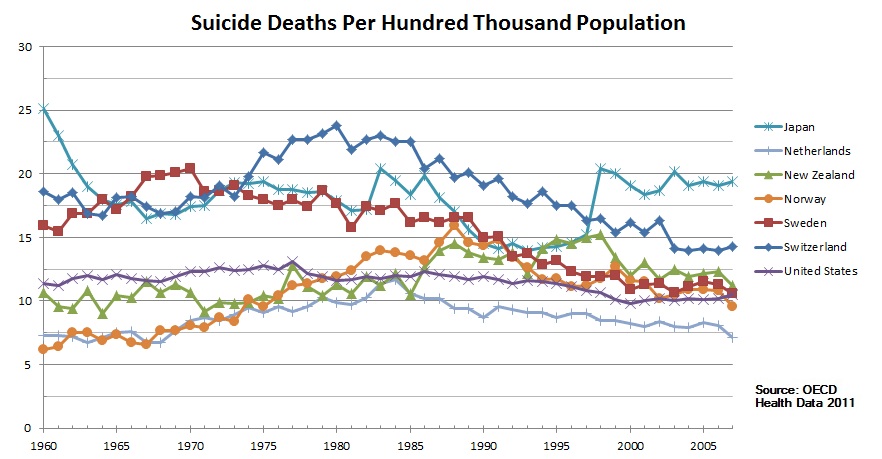 I agree with that. The UN can handle things for a bit.

Because war is a business and boys don't cry. This world is effed up.