It's the ship that made the Kessel Run in less than 12 parsecs, and now, according to a new rumor, the Millennium Falcon may be returning for J.J. Abrams' Star Wars: Episode VII.

Latino-Review reports that interiors of the Millennium Falcon have been completed at Pinewood Studios in London, where an estimated 90 percent of the film's production will take place. (The other 10 percent is expected to shoot in Los Angeles.) 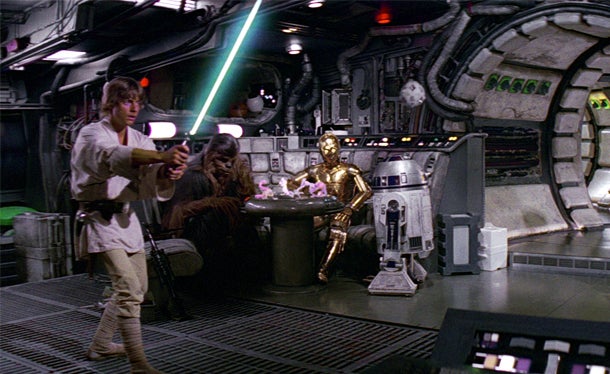 True, it seems a bit early for production interiors to already be completed in September 2013 when Episode VII isn't expected to begin filming until sometime next year. However, this isn't the first time we've heard the rumor. A site called Talkbacker reported a similar story earlier this week.

This is by no means proof that the Millennium Falcon is in Episode VII, but with LR now backing the rumor as well, it certainly seems more likely than it did a few days ago.

Would not be the same without it.

We need scum like the Solo family in the movie if we are going to believe in the new Star Wars movie. Can't wait to see how they come together.

It's been nearly confirmed that all the main cast from ep4-6 will be in 7 as part of the legacy story. Keep in mind 7 is only ~25 yrs past the events in RotJ. So they've aged accordingly.