I’m not going to lie I was pretty excited about Deadlight when I first had seen it.  It had this atmosphere and close enough in relation of The Walking Dead’s famous graphic novels that I just had to play this game.  When I finally got around to playing this 2.5D  side scrolling platformer I knew why I was reminded of The Walking Dead. 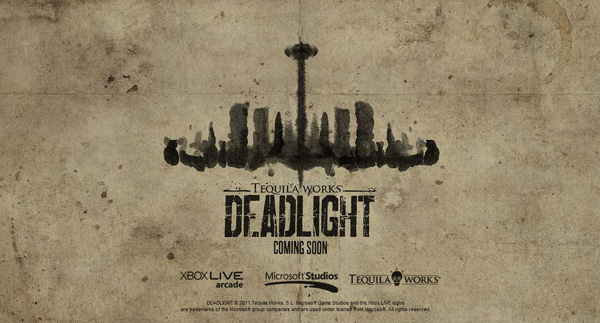 Deadlight’s story has a very similar feel to The Walking Dead.   It is told through comic book like cut scenes and it is about man by the name of Randal Wayne (The protagonist) who is searching for his wife and daughter in a Zombie Apocalypse after he somehow got separated from them.  Doesn’t that sound familiar?  Anybody ever heard of Lori and Carl?  But in all honesty it doesn’t matter that the story is similar as long as it is good.  That is the thing though, it really isn’t in every way possible and had me rolling my eyes time after time. There is other things in the game that happens to Randall that makes you think of The Walking Dead and in one part even has a part where they obviously copied The Walking Dead’s episode where Rick was stuck in a tank and Glenn saves him by saying he was an idiot on the rooftops etc.  They so blatantly copied this part that it made me roll my eyes yet you never really feel for this character or Randall.  Although I will say that you do want to find Randall’s daughter and wife as the story progresses until about half way through the game it starts to unfold to where you can predict the ending entirely.  However I actually predicted the ending completely wrong because even though I was right it had to be the worst ending I’ve seen in a while.  Have you ever watched a movie and asked yourself “Why didn’t he/she just do this?  Wouldn’t that have made more sense?”  The problem with the ending is Randall has options but because of the poor writing it ends on the worst possible note.  On a final note, just don’t expect to be thrilled about Deadlight’s story what so ever.

Regardless of a good story, every game needs good gameplay.  After all, the gameplay is what makes us play games most of the time.  Deadlight is a 2.5D platformer that you will need to jump across gaps or run through enemies.  In this case your enemies is zombies and they are beautifully done in this game.  Well that is until you have to kill them.  Since when does it take like 10 hits to kill a zombie with your axe!?  Not sure if Randall just can’t swing an axe or not but there is no way it should take that many hits to kill a zombie.  The good news is if you get them on the ground you can execute them in one blow.  The annoying part is getting them to the ground in a big group.  The really good news is there is other weapons like a shotgun, Pistol, and a slingshot.  Well the slingshot is useless against zombies but it does help out in puzzles which is the one highlight out of this game.  The pistols works great as well as the shotgun.  You will scavenge for ammo because this will mean life or death to you in certain situations.  If you are left without ammo your only option is to run past the zombies or to tackle a zombie and hope to make it to the next safe point.  They do have some few exciting points where you have to move through zombie hordes quickly but unfortunately this may be the most unresponsive game I’ve played yet.  Randall just seems like he doesn’t want to climb anything at all. For someone who is in a zombie apocalypse he sure isn’t in a hurry.  To get to something above you better stand perfectly still for like 2 seconds and then jump because otherwise he refuses to reach the platform above him.  I found myself get annoyed by this numerous times because that two seconds is important.  I don’t want to just stand there while zombies are feasting on my limbs. However the puzzles was nicely done and actually made you think from time to time.  This was the one highlight in gameplay especially when you needed to solve a puzzle while a zombie horde was after you.  You may need to shoot a lock above you to knock down a crate or use your slingshot to knock out a window to have the glass fall on zombie.  Maybe you just want to whistle the zombies towards you so they can fall to their death or step on electric wire.  These was the few moments of the game that I genuinely enjoyed.

There is some good news about Deadlight though. It has wonderful style in graphics.  The way the zombies look like shadows in the background and the gloomy atmospheres really makes this game standout and makes you want to compare it to the masterpiece that is Limbo.  When I first saw this game I had to have it and it I really wanted to like it.  Sadly I just did not like it.  The Gameplay is average, the story was horrible, and the unresponsive controls just killed this game for me.  Even though it is pretty I would recommend staying away from this game unless you want to have a few highlights here and there and just really want to play a zombie game.

I give this game a 10 because it's made by Spanish people.

But that would make me pretty biased =P


Honestly, I gave this game a 7. The controls are awkward sometimes, and it is a very short experience. But in all honestly, if they had managed to make the game with the same "feel" as it has the first chapter, it would have been awesome.

lmao  for the spanish XD haha

Yeah the 1st chapter was pretty good and then I slowly started hating this game more and more after chapter 1.  Really big disapointment for me.

Yup. That was the main problem people had with this game, it runs out of steam after the first chapter. The second chapter is a buggy-fest full with unexplained traps and cheesy dialogue, and the third chapter ends with a blink and a rather poorly execution and a horrible ending-twist that made no sense.

The worst ending possible.  i dont want to give any spoilers away but without saying too much he had a choice.  So poorly written.

Well... he didn't know how to swim . Perhaps that's why he didn't do the obvious xD

Ohhhh I forgot about that!  That helps a little.

Sure it helps, but still pretty silly ending. He could have jumped, anyway.

How are you putting the spoilers in that black stuff haha