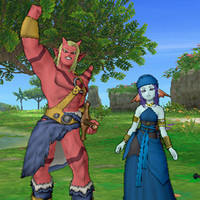 Intellectual property laws in Japan aren't quite the same as they are elsewhere. In Japan, you can rent CDs and DVDs. You can also sell back used games. You can call a Big Mac a Big Mac. You don't even need to refer to it as "Le Big Mac." However, those IP laws don't allow for game rentals.

Dragon Quest X is proving to be an exception.

Square Enix has worked out a deal with media retail chain Tsutaya where you can rent/sample Dragon Quest X for eight days and seven nights – for free, including a special code that allows you to play online. After the trial you can purchase Dragon Quest X from Tsutaya for 3,800 yen ($46), with save data carrying over to the full version.

Dragon Quest X was released in Japan for the Wii back on August 2nd.

I don't know if this is good? Guess it is? Can't be bad anyways.

Do you mean rent for free or simply rent? I am sure renting is legal worldwide. Not sure why legality has anything to do with "free" neither.

I don't think I get where you're going with this...?

Is it illegal to rent video games in Japan?

It would appear so, yes.

No wonder software sales for that one country are so high.....its the only option

It is also illegal in Belgium. That law was made when a lot of Pc developpers complained about gamers making copies of their rented games... Did not knew it also existed in Japan..

Yes. It has been for decades.

Anyhow, this kinda sounds like a paid demo, no?