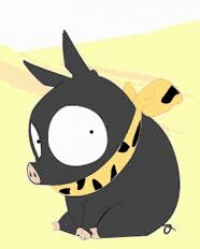 I am guessing you never came back after that.

which alt acount are you? selnor is that you?

he does look quite a bit more mean like that! still cute though

theprof00 posted something on P_chan's wall:

please visit the game thread and confirm that you have received your role.http://gamrconnect.vgchartz.com/thread.php?id=117225

that avatar is from ranma right

I never learned to tie my shoes

RareglovE said: i bet p_chan can suck anyone dry I've only gave head to two guys. My current boyfriend and a my old friend....

lolita said: None of them my guess is that P_chan is a guy & attention whore. I met a dog named lolita....

Favourite Books: I don't read much

About Me: Hi my name is Chelsey, I am a sweet girl, I am a fan of Ranma 1/2 my favorite character is P-chan! I run in the track team, I love to run!

P_chan hasn't added any games yet!