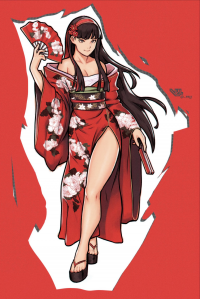 L1: Ghost (337 until level 2)
YukikoAmagi So yeah, coming back here was definitely the wrong move. It's just too much on my mental health. Whe

So yeah, coming back here was definitely the wrong move. It's just too much on my mental health. When you get so stressed out that you stop eating because of a fucking video game forum, you know that something's wrong, and it's not like there's a pot of gold at the end of the tunnel. There's almost no benefit to it.

Sorry for the grammar errors.

Don't worry about it!

I can already tell that my mood swings will require me to take breaks from here when I start feeling down.

That's what i do when i get too much stress normally or feel like i get upset.Take care.

I admittedly reacted very poorly to certain falling outs I had while here. I paid too much attention to the hurt I was receiving, and not on the actions I committed. Some people didn't want to associate with me anymore, and I should have respected that. Instead, I wanted to desperately keep a grasp on the past that was happier (or at least in which I believed things were better). I guess what I really should have realized was that if I truly cared about these people, I should have left them alone as they wished.

I honestly truly should have left in around October of 2017 as I originally planned on doing; I was extremely depressed from certain things that had happened here and I knew that things wouldn't be better again here. What's more is that I had an out, ResetEra had literally just launched at around that time and I even made an account there. However, as what would soon prove to be an egregious mistake, I decided to come back.

This was a horrible mistake. It's not as if everything that went wrong started here; I think back at some things I did even before that time and cringe at it now. But with my honeymoon phase here over, and still being pretty hurt, I was both paranoid at other things happening, and much more critical of the content I saw on here. It led to several more run-ins with various members on here. So, what should have ended in October dragged on several more months until July. As I said, it was not like I didn't do anything questionable before then, but most of the damage was done during that time.

In retrospect, I have no idea how I even lasted here as long as I did. I guess it was a mix of not having friends, getting really attached to the community here, having a job that I hated that this place provided a relief from, etc. I remember just how excited I used to be to come onto this site/the Discord server to converse with people, like extreme excitement. However, that excitement also had me view certain things overtly positively. I am a very sensitive, shy person, and so I am surprised that I wasn't driven/turned off by this place earlier. Especially considering my political views, and how often I'd get frustrated with what I saw posted on here. Maybe this community was never for me and I just didn't realize it. Maybe this community changed. Maybe I changed. I don't know, I cannot absolutely answer that myself?

Why am I posting this here? I know very well that this will probably be seen by very few people, if any, and that this is ultimately more of me writing for myself. This is so I can get closure for myself. I needed to write this to finally be able to move on. I have emotional swings, that's for sure, so maybe the thought of this site and certain people will stress me out again in the future, but as of now I wanted to post this. I will no longer try to contact people here whom I am not already in communication with. Rather, I'll just leave my contact information here for people to talk to me if they wish to do so. That way, I won't run into the potential issues of trying to contact people who want nothing to do with me/get stressed out by me, or making people feel pressured to talk to me. Yes, I may hope that some people do decide to get in touch with me, but I have to let people decide if they want to rather than trying to force it myself.

Welcome back Poly. We never talked much, and I certainly don't agree with many of your personal views, but it's always nice to have old members back. Take your time easing back in, and frequent as much as you want. But always remember this: No matter how much people may end up disagreeing with each other(as I do alot with Chazore), we all come here to celebrate one thing: gaming. So if you think one tiopic is getting too hot, just take a step back, do something else, and come talk about something else you like. Because for all faults us humans have, we all want each other company, and to enjoy it while we last! After all, we areb all in a gaming forum for a reason.Welcome back!

Thanks. Yeah, I definitely will have to take this site less seriously than I did last time, because last time was just way too tasking on me mentally, and I had a tendency to re-direct that to other people as well.

If some of what i said in the past ever upset you then i'm very sorry for that.I wish you well.

No worries, you don't have to worry about it. In fact, I don't remember you ever saying anything that hurt me, honestly a lot of my pain comes from paranoia, I have a tendency to really overthink things.

The autistic me can relate with that,it can act like some kind of obsessive hyperfocus but the amount of stress you get from it is more than the amount you are able to lose so that might result in depression,panic,insomnia,paranoia. It's important to know why we are feeling as we do and why we let some things hurt us and why we can not break this pattern,strangers on the internet will not help you and only you can help you in the end but others can assist ofcourse.

Anyway this mental patient can try to give you advice whenever you feel the need to talk about it.

I have some inklings as to why I get depressed/stress/anxious/etc., but my main problem is actually doing something about it. That's the hard part, and one that I have had trouble finding the best way for me to cope/manage.

Yeah we have these mental barriers that need to come down first before you can get the motivation to change those harmfull habits that hold you back from being a more happy person,At your age you are being wise with selfreflection and that is a big positive.When i was your age my ego was too bloated to have the selfunderstanding i needed and it kept escalating to the point of shizophreny and i feel i ended up with a loss of personality at the breaking point.

But maybe it is good to go speak with a proffesional about it,those people are there to bring down those barriers as fast or slow as you want.

I definitely have spoken to professionals about it, even this year when I had a horrible case of chronic depression. The problem again, is that I need to actually commit to change. Spending all my free time on a computer, with no in-person friends, with a bad diet and lack of exercise, is a bad combination.

Do you have pets?
For example having a dog that you are attached to wil likely give you the motivation the shedule him into your life and that is a start,if you can keep doing that for your dog then it might help in breaking down the barrier that keeps you from taking care of yourself.

And the grammar error comment was meant for here.

I do have 2 cats, one of them is pretty funny but the other one very much keeps to herself.

Yeah they can be funny,one is currently mad at me for not giving her a snack BEFORE i fed the other pets.She then usually ignores me or sits in the garden while staring at me with an annoyed look.

My cats are always whining for food, even right after I feed them!

So, I'm probably not going to check this site out very often. So, if anyone really wants to get in contact with me, my Discord account is a better way of doing so:

How are you doing? You still in Michigan?

I'm doing all right. Could be better, could be worse. I've been doing some reflecting though, and realizing that I've been thinking way too much about the stress this place causes me, and not enough about how much stress I could be causing others just by being here. I mean, I'm not proud of some of the stuff I did while here, particularly the fact that I would try to contact people who clearly didn't want to talk to me, to the point of it being beyond reasonable. I was just too pre-occupied in my own thoughts of how I was hurting that I didn't think enough about the effect I had. That's why I think coming back here was a bad idea, I may have inadvertently brought back some bad memories for others.

As for Michigan, the coronavirus means the border's been closed, so I haven't been able to take a trip to Michigan unfortunately. I did spent around 5 months in China last year though.

How have you been?

OK I guess. Still struggling with the same bullshit I was when I became active on the site in 2015. :)

What brand was your first console?

Sega Genesis was my first console. ...

This song is a classic, Every Day Is Halloween! ...

What would the 8th/9th Gen be like if the Xbox One kept DRM?

YukikoAmagi has 7 friends (view all)

YukikoAmagi hasn't added any games yet!