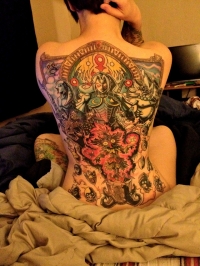 I removed your avatar because it was over the line in terms of being NSFW. Feel free to put another avatar that is more appropriate though.

You are from Romania? Live you in Romania or another country in Europe.

Yep. I was born in Romania and I am still living there.

cool i have 2 friends from Romania. But thej life in Austria here. Andhow you became a Nintendo Fan in Romania?

I think I was 4 or 5 when I recieved a SNES as a birthday present along with Mario World. I was hooked!

Wow and this in romania^^. I am since 8 month again a Nintendo fan since the N64 and Gameboy Colour i have never a device from this company but , Since Wii U and 3DS i am back.

mjk45 posted something on Asdrendeluxe's wall:

In reply to you believing they made billions with ps2 they did , when ethomz mentioned 2002's yearly profit he put million when he meant billion , the controversy about the PS2's profits stem from the fact that some one used that list to show that Nintendo made as much profit with their console selling way less ,except it included the portable as well , what people forget is because they where new comers at that time , Sony spent during the PS1-2 era an extraordinary amount of what would normally have been profit , on promoting the brand way more than Nintendo and it helped move the industry , from 10 -30 mill lifetime sales to PS2 with 150 mill.

When will Microsoft leave the console business?

They abandon of Nokia has already began. Honest i see no future with Microsoft with the XBOX brand. Forget not for 10 Years Microsoft was the King in IT-market, today they became more and more weaker. They can not afford to give Money to a decreasen ship....

LemonSlice said: The "official" Bayonetta at E3 2013 was the best. Photo doesn't do justice sadly.   I really agree with you. She was beautiful....

Favourite Music: A lot , i have no favourite.

Favourite Films: I am not a great Movie guy but The Lord of the Rings was cool.

Hobbies: Reading and of course Videogames.

About Me: I am a PC and Nintendo Gamer.

Asdrendeluxe has 7 friends (view all)