Politics Discussion - The US is ranked as a 'Flawed Democracy', what needs to change? - View Post

Can you show us any terms of service from any of the platforms you are refering to that includes a paragraph that says something to the effect of "we can ban you for any reason if we feel like it?"

Because that's not how it works. When someone gets suspended, one or several specific rules will be referenced as the reason for the suspension.

Trolls continually find ways to skirt the rules. We could add new paragraphs forever, and never catch up.
At the same time, rules have to be coherant and condensed enough for readers to be able to find what they're looking for with relative ease. And that won't be the case if it's as long as the bible.

If someone says "That's a nice daughter you have there. It'd be a shame if something happened to her..."

You could argue that's not against any rules, because they're just showing concern for the daughter.
But it's the intent that matters. In which case it can be a threat.

How we determine whether something is a missunderstanding or malicious is not on a whim. We look at a users post history, and often times we've discussed and kept an eye on the user for months/years before before we see that several dots form a line.

Wasting people's time is one of the most disrespectful ways to behave towards others online.
I am not super familiar with your case. But I do know that several moderators, myself included, reached out to you multiple times beforehand and tried to guide you towards more proper conduct in those threads. And usually when I ask you a direct question about what seems to be the root of a lot of the issues surrounding you, which seems to be how you consume your news (even just a few days ago in the Xbox article when I asked you where you got the idea that Xbox were saying the things you said about Playstation) you tend to not give a direct answer about that.

And so you repeat the process again in another thread. And seemingly this one too, as I'll get to further below.

I do agree that different points of view is important for things like this. Even just in a general sense, another person can catch a detail you missed while brainstorming.
But it's not likely that Elon has gotten to know the moderation team on Twitter (which is also probably massive sonsidering their traffic.)

A PC guy on our staff often gets accused of being biased towards a particular console.
Many times we've been accused of doing A, when we actually did B. For example, someone made a thread a couple of month ago saying that we locked a thread because it was too controversial. They didn't ask any of us, or say it in a speculative way. They just stated that we did.

But we locked the thread at the request of the thread creator himself, who has a right to request a lock.

An outside perspective can often get the wrong idea about how these things are handled if they don't make an effort to get to know the facts first.

Elon Musk decided to buy this company before he could have concievably gotten to know the moderators. And I doubt he had the time to do that afterwards either. But no matter who he puts in charge there, he is still making company wide decisisions himself because he's the majority owner.

A platform that is meant to be welcoming to everyone, cannot also support intolerant people who make others feel unwelcome simply because of how they were born, (for ex LGBT people and people of color) because that creates a paradow where you allowing those people to thrive chase the other people away.

So you have to chose where you draw the line. Do you want the bullies, or the bullied?
Most companies draw a line at discriminating against how people were born.
Regarding disinformation, the line is usually drawn at the point where it is considered harmful.

If you just draw the line at what is or isn't legal, it's going to be a very unbearable experience for most people.

Regarding government involvement pertainign to missinformation, there are laws about that.
Here's one example:

b) Whoever willfully and maliciously, or with reckless disregard for the safety of human life, imparts or conveys or causes to be imparted or conveyed false information, knowing the information to be false, concerning an attempt or alleged attempt being made or to be made, to do any act which would be a crime prohibited by this chapter or chapter 97 or chapter 111 of this title—shall be fined under this title, or imprisoned not more than five years, or both.
For example, urging people to march on the capital to fight for an election you know you lost by claiming it was stolen, which leads to what happened on Jan 6 where people lost their lives, could potentially fall under this.

The article I screenshotted mentioned that much of it originated from 4Chan and trolls trying to test the limits.

Use of N-Word Jumps 500% After Elon Musk Buys Twitter (yahoo.com)
Much of this hate speech was organized on platforms like 4chan, said the Network Contagion Research Institute, which analyzes content posted on social media to detect potential threats. In addition to testing whether their trolling would slide under the new management, NCRI lead intelligence analyst Alex Goldenberg said users were trying to “to make as big a mess as possible for Twitter’s new management.”
But if their objective was to rub it in the faces of those who prefered how Twitter was handled before Elon, then they're kinda proving their fears to be correct.
The point here is that an increase in racist emboldenment is expected if Twitter allows things like hate speech for the sake of "freedom of speech".

Now we are at the part regarding what I said about "And so you repeat the process again in another thread. And seemingly this one too, as I'll get to further below."

The conspiracy theory by Hillary you're refering to is her citing a New York Times article that had interviewed people he knew, and posted a link to what very evidentally is his blog. Unless there's another person named David DePape living in the same town that just happened to stop posting updates the day before the attack and ever since then. It's even been deleted now. www.frenlyfrens.com/blog
But you can still check it out through TheWaybackMachine. Here's a selection of some of the posts as they appeared on Oct 28: https://web.archive.org/web/20221028173344/http://www.frenlyfrens.com/blog

Since you claimed "There is far more pointing to him being a liberal", let's take a look, shall we?
Timestamps will appear as they did on Oct 28. 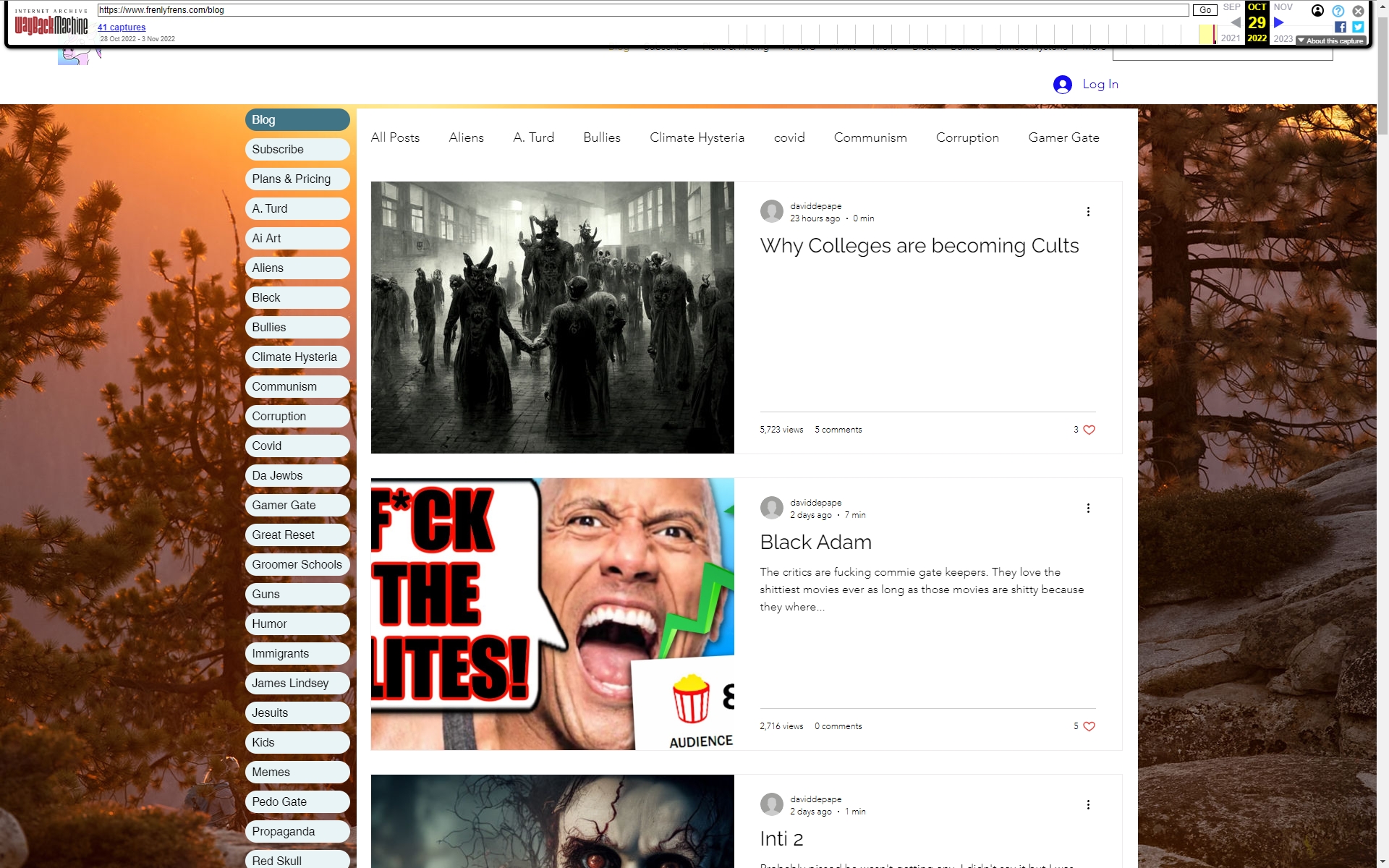 There's a lot to unpack in this first screenshot, and we haven't even scrolled down yet.
First of all, let's appreciate the categories.

If we scroll down there's also:

That sure sounds very liberal of him, right?

In the first blog post in the image above, it references a video from a guy complaining about social justice being taught in college.
In the second one, he says that film critics are "fucking commie gate keepers". 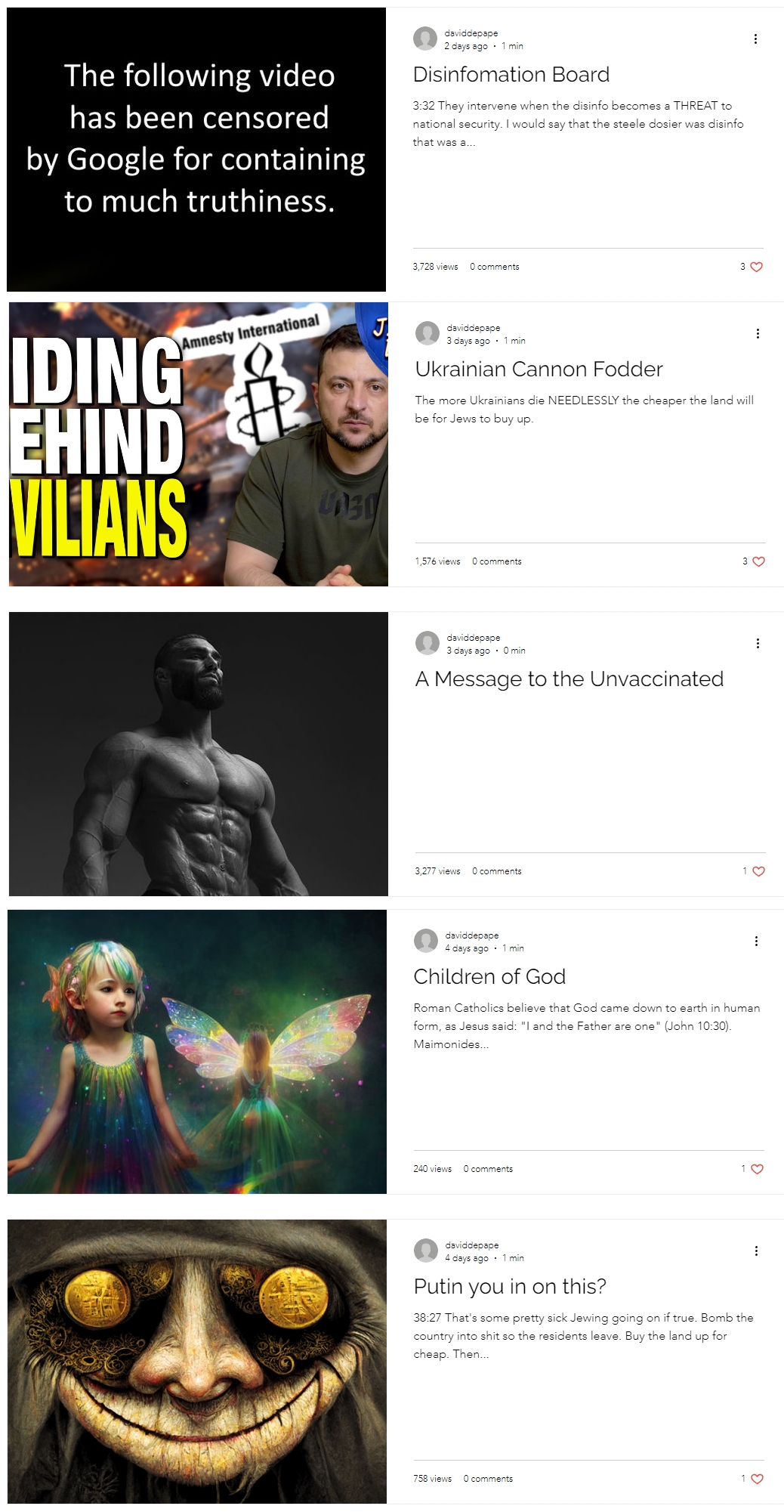 Going a bit further back in time on his blog, there's also concerns about pedophilia, anti-white racism and “elite” control of the internet.
One of his blog posts suggested that there had been no mass gassing of prisoners at Auschwitz. Another linked to a video defending Hitler.

And on Oct19 he posted this:
"Trump you NEEEEEEEED to make Tulsi your VP in 2024. Of the ENTIRE democrat presidential candidates in 2020. She was the only democrat candidate who WASN’T running on a platform of being an insane mentally unwell demagogue."

This is extreme-far-right-Q-Anon-conspiracy level shit.

So where did you get the information that made you think"There is far more pointing to him being a liberal"?

You need to give a direct answer to this question.
Link us to where you read/heard this, and explain which parts convinced you of this. As I did you the courtesy of not only linking to his blog, but also highlighting the content that unquestionably reveals that he couldn't be further from liberal.