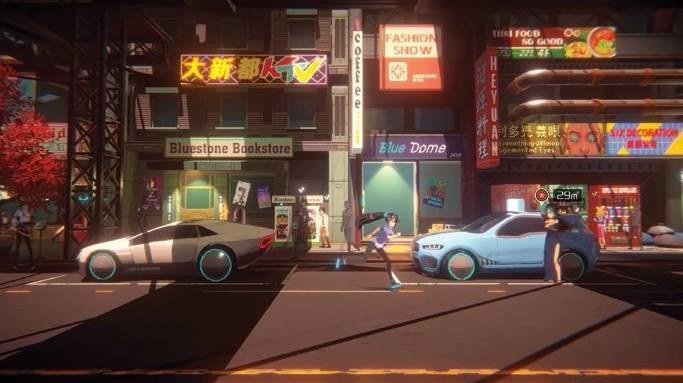 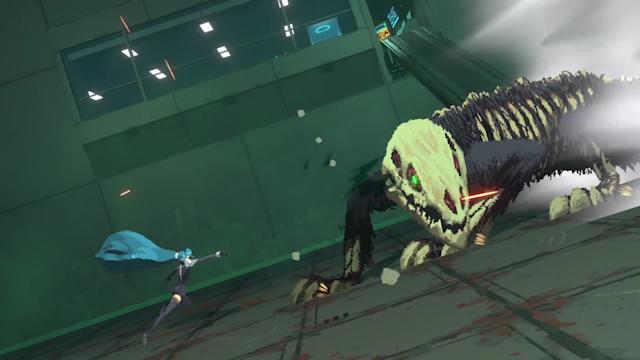 + The mix of 2D/3D and the cyberpunk aesthetic looks amazing. I almost wish the game was a much more interactive 13 Sentinels. My favorite part of the game is just running around and getting absorb in the cool locations.

+ Every location in the game has its own shops and everything is available as long as you have the money and/or materials. Very possible to get powerful gear early in the game if you are motivated enough. I like that kind of choice.

* Story takes a looooong time to get interesting. When it decides to get interesting the game is nearly complete. A ton of characters are introduced with no explanation on who they are. Now that I think about, I don't recall any character getting any substantial background information. Some don't even get any new details. Of course you can find a bunch of research logs that attempt to give more details to what is going on now and in the past but they are always partially damage, not dated or not clear who the writer is so they don't always help to shed light on things. The event that sets the adventure in motion is the abduction of your brother and that really remains the focus of the story even when more important events are brewing and I'm sure that is done on purpose because sequels are obviously coming. I was never hooked but there is enough there that I was at least invested in paying attention the end.

* Battle system is fun. Just to quickly sum it up; 2D Devil May Cry. My only issues are too many enemies have armor(no flinch animations) for a combo based battle system. Some enemies and all bosses have a stun gauge that must be drained before you can really start laying the smackdown before it regenerates and you repeat the process again. This really drags out some boss fights. Anno Mutationem has what I believe to be the most useless super mode in any game. The duration is so short (while taking a long time build) that it is over before you do anything. Ann also move very erratically during the super mode making it hard to focus on a particular enemy.

* I wish there were more things to do. There are like 5 different locations in the game and they're relatively good sized. Outside of a few sidequest though, there is nothing to do in them. There are a few mini games that are easily mastered. 50 different collectables(25 Cyber Nekos and 25 reference posters) are scattered about to encourage you to explore these locations but they don't do anything expect pop a trophy. A yakuza like interactability with locations would have been perfect.

* Speaking of those sidequest ... not interesting. Nowadays, sidequest are used to further flesh out the world or characters. Anno decides to do the old style of sidequest' "I lost my blueprint! Can you go find it?" a bunch of times. Interestingly, the very first sidequest given to you feels strangely different in detail compared to the ones that follow and falsely sets bar that no other sidequest meets. They just feel like a checkmark on a list of things a modern game should have. Also the game list 23 of these; bullshit. There are like 10, but each objective in a sidequest counts as a number on that 23 list.

* You can just tell that some parts of this game's script was run through google translate. There are more than few conversations that read very awkwardly; like 2 robots talking to each other. Dialogue not matching what the spoken dialogue is saying, typos and missing words, and just not making sense in regards to what is going on like the current dialogue is in the wrong section. Caught that one a couples of times.

- This game has surprisingly long load times. Hell, I'm surprised it has load times at all. We are in an age where you can fast travel in Marvel's Spider and it takes 4 seconds! What the hell is up with this game and it's 10 sec+ load times?

- There is a hacking mini game that can get a little challenging. I don't mind the challenge of the mini game when it comes to optional stuff but when there is one blocking progression, then I do care. Nothing I needed to jump on gamefaqs for or look at a video but I was held back for like 10-15 minutes.

Anno Mutationem has all the ingredients to be awesome but instead of cooking them to like a 7, every individual part feels like a 5. The have a solid base to work work but everything has expanded on in the sequel.