Can Shamans tank? The short and to the point answer is, yes. You might be rubbing your eyes in disbelief of this answer. Maybe conjuring a ten page manifesto about how only warriors can and should tank. Although, I can go on a long rant about how there are many other classes that can tank, today, I’ll be focusing on our totemic friend, the shaman. 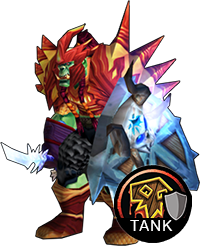 The topic of viable and optimal is contentious as some don’t see the difference or mix them up and levy a misguided philosophy onto it. Optimal is the most efficient and foolproof solution that eliminates as many negative variables as possible and favors an easier path. Viable or often referred to as: possible, seen as the more challenging path but to many is a greater personal triumph. Shaman Tank is labelled as viable.

Many Shaman tanks agree their motivation is from the glory of seizing a feat the rest of the realm dares not try. If this resonates with you, please continue reading. You shaman tank if you want a challenge and a refreshing perspective from a 15 year old game. If it wasn’t obvious before, shield bearing is a sizable undertaking.

When experienced players Shaman tank and put in the effort, it shines tenfold. Shamans can fully tank 5mans, 10mans, off-tank & main-tank raids. But, this is reliant on personal and guild experience. Our overall defensive statistics won't reach a warrior’s. However, it isn’t necessary to do so, to tank.

Video: Shaman Tank Race Options - Video Explanation
You’ll be staring at your character for a long time. So, consider your character’s appearance as a key factor as it may entice you to play more. All races have benefits but they’re minor compared to other aspects. There is no wrong race. See Video to learn more about race options.

Flask of the Titans among other consumables.

Video: Shaman Tank - How to deal threat!?
We can increase threat in many ways, notably:

Major Rejuvenation Potion based on half of the Health & Mana gained. Damage items, ex: Goblin Sapper Charge deals threat equal to the damage so do reflective Buffs, ex:

Video: https://www.youtube.com/watch?v=FiUPOAtrqXY
Allies can reduce their threat, through items, ex:

Fetish of the Sand Reaver. Mage have:

Feign Death and so can

Limited Invulnerability Potion & redirect aggro Masterwork Target Dummy (taunts the mob). Classes in the 30-40 yard range won’t get aggro t'ill they surpass the threat level of the mob’s current target by 30%, as opposed to 10% for melee classes. (See More)

Video: Shaman Tank - Talents
The optimal talent setup for a Shaman Tank: (16/35/0), it has steady threat per second for raids & excels on short fights.

Lightning Bolt, followed by as many

Earth Shock.
3. Combat: For raids, use

Nat Pagle's Broken Reel to assure the first few Earth Shocks hit. In a fight, use relevant ranks of Earth Shock that suits your mana & threat. Stormstrike can’t be downranked but is also used in similar cases. If

Lightning Shield expires, cast it. If you suddenly might die, equip a defensive weapon, ex:

There's a hardcore raid rotation with great results but requires good gear, Buffs, etc… If all actions below can't be done don’t be sad, it’s mostly to display the maximum potential possible to achieve grand feats.

Lightning Bolt on the rat to get Elemental Focus. Equip a gear set with the most spell damage possible & have another Shaman with the (8/8) The Ten Storms gear set, cast

Lesser Healing Wave on you until you get

Staff of the Shadow Flame w/

2. Pulling: Hunter pulls the boss, be on the opposite side to create the most walking distance for the boss. A second before the Hunter pulls, cast Stoneclaw Totem,

Video: www.youtube.com/watch?v=1FrsQ7rfSj8
A max of 16 Debuffs can be on a mob. Reaching the max is major in raids. There's defensive Debuffs:

Faerie Fire among others (See List of Debuffs). With the raid leader’s consent, suggest ideal Debuffs without overstepping. We can apply Gift of Arthas & Stormstrike.

Video: https://www.youtube.com/watch?v=hJqx0yCkyig
There are two types of enchants, defensive, ex:

Enchant Gloves - Threat. Having Enchanting isn't neded to gain the profession’s advantages. Simply, give the Enchanter the required enchanting materials and they will enchant your gear for a small gold tip. See the List of Enchants.

Force Reactive Disk, Thorns, etc... (see a detailed Threat List) It’s crucial to switch and attack another target ever so often. In combat, items & spells giving health or mana deal 50% threat divided by each mob. Items also help until a decent amount of threat is gained on all mobs, ex: Masterwork Target Dummy.

Leader of the Pack, Hunter:

Trueshot Aura. For damage dealing classes, we prefer ranged classes over melee. If melee are needed, rogues are best. Groups with high threat dealers can have a Shaman: Tranquil Air Totem.