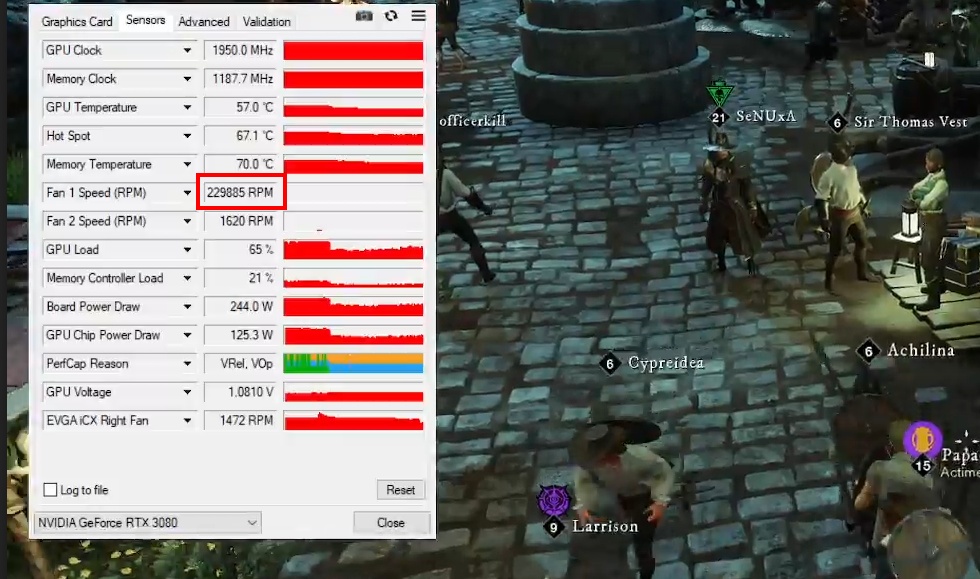 It seems to be a faulty fan controller raising one of the fans RPM to crazy levels. Now obviously in actuality, no fan can go that high but he does report that you can actually hear that one fan ramping up to 100%. The card also ignores the manual fan settings so even if you set it to 50%, it will still ramp up well above that. There is also this quite:

"However, it also happens in this game that the fans keep howling and you have to close the game immediately before a blackout and the well-known emergency shutdown happens shortly after. In this case, the only thing that can be done is to disconnect the computer from the mains and wait a few seconds to be able to boot it again. This in turn indicates an emergency shutdown by the power supply, which proves that the card must have demanded an abnormal amount of power in this situation."

Personally, after trying to read the article a few times, I am still not quite certain what causes the card to stop working. Since the article is translated from German, it's not the easiest thing to read. A fan controller reporting faulty numbers and fans ramping up to 100% shouldn't cause the cards to die. It could be due to abnormal amount of power but then it should be affecting other 3000 series cards as well to the same extent but we know that it's mainly the Evga FTW3 cards that are the issue. Could be that FTW3 has some terrible power delivery systems but it's hard to tell reading the article. Hopefully GN or someone will give us more clarity.

One thing I will say about the switch that annoys me is that, as an owner of Hyrule Warriors Age of Calamity, that game runs at 15-25 fps during most fight scenes. So when this version gets out of early access, I am gonna give it a go!

The "30 FPS target" refers to the floor of what we consider playable in our performance testing; games we've tested and shown have consistently met and exceeded that bar so far. There will also be an optional built-in FPS limiter to fine-tune perf vs. battery life.

Of course, it is still supposed to be AIBs only which if that is the case, the MSRP doesn't matter much as AIBs generally charge well above MSRP. But if true, at least AMD's intention with the MSRP is less wtf. I get the feeling that a 3060 Ti will continue to be the best bang per buck.