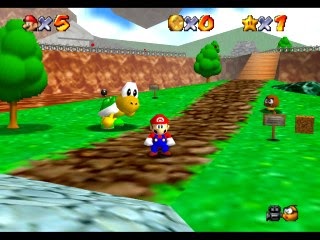 The finest example of the great migration from two-dimensional sprites to three-dimensional polygons, Super Mario 64 gave the platform genre unprecedented freedom of movement. It also introduced a revolutionary camera system that allowed players to manipulate the camera angles in the game. Set once again in the Mushroom Kingdom, Super Mario 64 sets Mario on a path to a final confrontation with his arch-enemy Bowser, who has once more captured Princess Toadstool. Super Mario 64 features fifteen diverse game environments and several hidden areas.