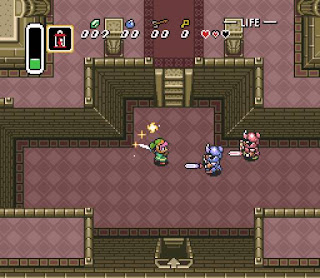 While not necessarily the greatest Zelda game ever developed, A Link to the Past is certainly the quintessential Zelda experience. It established many of the items, enemies, and tropes that appear in almost every Zelda game. The Master Sword, for example, first appears in A Link to the Past. The game also introduced to the series the idea of parallel or alternate dimensions, across which the hero can travel. This added a new (forgive the pun) dimension to puzzle-solving in The Legend of Zelda. Items and portals that appear in one universe may be manipulated to produce effects in a parallel universe.