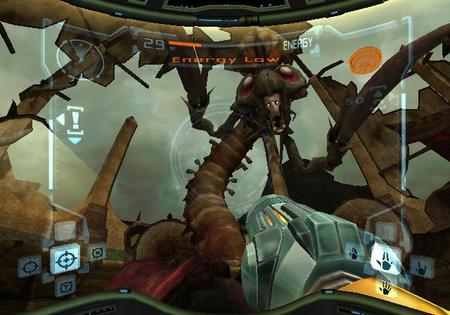 After Super Metroid debuted in 1994, fans waited for the next installment of the franchise. And waited. And waited. The N64 came and went. And still they waited. Finally, in 2002, fans got what they wanted: not one, but two new Metroid games. One for Nintendo's newest handheld, the Game Boy Advance, and one for its newest console, the Gamecube. But wait a minute. The Gamecube title, Metroid Prime, wasn't developed exclusively by Nintendo, nor was it a third-person action-adventure game. It actually looked more like a first-person shooter. When Metroid Prime was showcased by Nintendo at E3 2001, the reaction from fans and critics was mixed at best. Thankfully, Nintendo and Retro Studios (the new kid on the block) stayed the course, and released a game that somehow, miraculously, managed to transition Metroid from 2D to 3D and third-person to first-person all at once. The result is one of the best games of the sixth generation, and the start of a brilliant trilogy that would continue on GameCube and Wii.