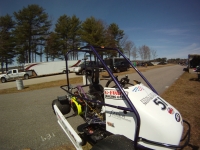 The F1 games are still going good, especially if you like the new regulations in F1. Codemasters has been making the games as realistic as possible, but they do have some of that arcade feel. The realism is the driving physics and turning off the driving aids. The 2014 cars are harder to drive than the 2013 cars because of the reduced downforce and the increased torque from the V6 turbos. The 2013 cars had more downforce and normally-aspirated V8's, which were easier to drive.