Bravely Default was developed by Silicon Studios and released February 2014 by Square Enix.

A great chasm has opened up and swallowed Norende village with Tiz being the only survivor.  Agnes is on a quest to find why the cause of the lands corruption.  Edea of the Eternian Forces walks whatever path she sees most righteous.  Ringabel lost all his memory and loves mammaries.  All four characters meet and everyone follows Agnes to restore the power to each crystal.  The story is decent to good, a bit slow though.  There are party chat events that you can avoid completely, but I think they're the best part of the story.  They offer background at times to what the characters have been doing after a quest or while in a new village or dungeon, etc.  Edea and Ringabel are extremely likeable, Tiz and Agnes somewhat, but everyone else in the game just seems forgettable.  There's even further story to explore in the game with Ringabel's journal which is available from the start.  The events in the journal follow the events of Tiz, Agnes, and Edea through the eyes of someone who is against them. The journal is the events in the storyline, although somewhat different and offer more background information if you want to look deep enough into it.  The journal also keeps track of every monster you've fought, weapons and items you've acquired, etc.

Throughout the game you'll be able to progress through the main story or separate side stories.  The main story has a few job classes you can acquire, where side quests unlike most recent RPGs aren't your typical fetch quest.  Just about every side quests has the character traveling to one of the many non main story dungeons throughout the game and fighting a unique boss where you get a story scene and acquire a new job class.  You can skip any of these side quests and the story will still make sense, but all side quests link together with the storyline.

Similar to how Final Fantasy 5 does it, you acquire job classes as you progress through the game.  They might be named differently, but they stem from your traditional Final Fantasy type job classes.  Each job has a primary move set and a skill attached to them.  The jobs will gain levels separately from the character levels, gaining more moves for it to use or different skills to equip.  A secondary moveset can be applied to each character allowing for a white mage or knight to cast black magic even though not a black mage, etc, while each character also has one skill slot at the beginning of the game, to up to five at the end.  These skill slots will be innate abilities from physical attack +10% to mp reduction by 25%, costing one to three skill slots each skill. 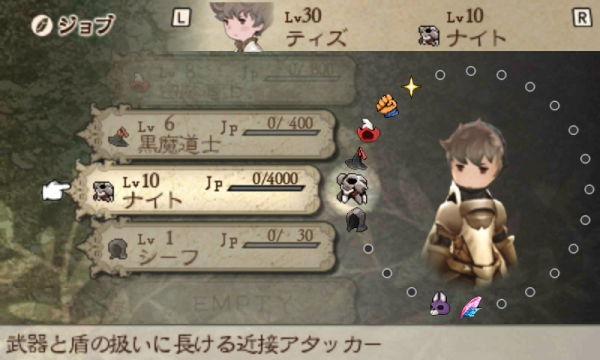 There are a lot of problems with the skill system in Bravely Default though.  Magic users are fairly powerful for the first five hours but are severly outclassed by physical attack characters a short way later.  It's not until about 30+ hours in with an excessive amount of grinding allowing you to get a few skills from the right job classes, requiring mastery of atleast one, that the magic user job classes aside from healing  or support are even remotely useful compared to physical attack jobs.  The other problem is that you'll switch to different jobs throughout the game to learn more skills, but you'll be more than likely using the same couple skills repeatedly towards the end of the game.  There's barely any variety of customization that can be done until you're in chapter five with any class.

Combat is a turn based system with an element added called bravery.  This is an attempt to add a strategy element to the game where you have what's called brave points(BP.)  At the end of each turn, characters will gain one BP.  You can use default which both defends and stocks that one BP, up to a max of three for most job classes or attacking which will use that one BP.  Whether you're stocked with 3BP or you have 0BP, or however many you have above 0BP, you can use bravery up to three times per character for up to  four attacks in one turn.  Like magic which requires MP, some physical attacks will require extra BP, and if an attack is going to put you below -4BP it won't be used during combat.  If you're under the brave limit, -3 to -1 after the turn ends, your character will be able to do nothing until however many turns it takes them to reach 0BP where they can act again. There are some skills that allow you to give BP to another party member, to regain BP through being attacked, hit with status effects, etc, but for most of the early game you'll use default.  It's a unique concept at first, but the most efficient strategy against most bosses would be stock up your BP and then go all out or use BP when necessary.  At times it does add strategy to the game, but it's more of a constant charge up then attack technique which degrades the game.  At around 30+ hours you can make a job class build that can max out your party's BP every turn, until that, it's mostly stock, stock, stock, attack.  Xenosaga 2 did the same.

Another problem with the brave system is random battles.  Because you can get as low as -4 before your characters can't act, early game you can just brave three times and attack to win every battle in a single turn.  When you get to chapter three, you might need to put a little more strategy behind it, but just about every single random battle can still be completed in a single turn from there until the end of the game.  They wanted to add strategy to the game with the bravery system, yet it's more like they've added the automatic win button when it pertaining to random battles.  They should have just put a difficulty option to give you exp each time you were supposed to get into a battle without even requiring the player to battle, because the bravery system killed any random battle difficulty whether you sat at one location grinding or rushed ahead.

There is one feature that does atleast make the game more accessible to everyone who plays the game, or maybe you don't want to fight any encounters, maybe you're at one of the last chapters and want to grind for exp and jp to max out your jobs, etc.  There's an easy, normal, and hard mode.  You can reduce or raise encounter rate by half, you can remove it completely, or you can double it.  If you don't want any quest notifications to appear on your map, you can remove them all.  Lots of options.

Other than what chapter you can skip to the end of the game I'll explain this spoiler free.  Another issue is chapter five and beyond.  The game drags from there to the very end and While you can skip to the end of the game at chapter six, minus a boss and the true final boss, you might not know this without looking at a guide until you do half of what you're supposed to do and get certain dialogue.  Even after you're told that something is possible within the game, there's actually a glitch you may run across forcing you to do the remaining chapters.  I didn't know there was a was a second ending but I did attempt to do what the dialogue told me, and after a few minutes of nothing happening, I assumed I was to progress through the game normally.

There's Norende village, and this isn't required at all to complete the game, so it's really a non issue.  It is however a way to get more powerful equipment early on, and an easy way for a certain class to be more useful than they already are as a support class, otherwise one function of the class is mostly useless.  Norende village is like a Facebook app where you check back every so often.  At the start you have one shop you can upgrade and barriers that you have to remove to get to the other shops.  With one villager it might take 30 minutes to level the shop up once, an hour next level, two hours next, etc.  Barriers only have to have villagers assigned once to remove them completely.  The more villagers you have assigned the quicker it is to remove a barrier or level up a shop.

There are two ways to get new villagers for Norende.  The way almost everyone will use, search for friends online, allows one search every single day, though for some reason it didn't reset at 12:00AM, so I don't know if it's once every 24 hours or once after a certain time in the day.  Maybe it's set to Japan's time zone and they never changed it.  Then the way almost no one will use more than once or twice, which while Bravely Default is playing, you need to street pass another person who also has Bravely Default playing.  Not only do you get new villagers using either one of these, but you'll update your friends and be able to summon your friends once to use a special attack.

Finally there's the graphics.  Sometimes there's an issue seeing where you're going on the world map with the cloud effect overhead and when it gets dark, but that's  not too big of an issue.  The dungeons look good, but the towns look beautiful.  It's zoomed in when you're moving, but if you wait a bit, regardless where you're at in the game, it'll pull back and  give you a much wide viewing area in dungeons, and if it's in a town it's the full town.  For those interested in 3D it's not the best I've seen on the system but it works very well.  In towns, it looks like it's a flat 2D image, but turn 3D it gives a subtle 3D effect with certain objects set as different layers that make it look better.  The 3D effect is a lot more pronounced on the world map where everything actually looks 3D, and almost as good looking dungeons.

Overall I think that Bravely Default is a fairly good game, but it has a lot of issues that weigh it down from having the quality of the classic games it's modeled after.

Inflated score would be 8.1.  The kuporeview inflation score.  What the score would be if the average game was 7/10 like IGN, Gamespot, etc.  Since I don't inflate scores and my scores are underrated compared to what people come to expect I came up with an equation to inflate my scores to make them similar to others.  http://gamrconnect.vgchartz.com/thread.php?id=177193&page=1#1