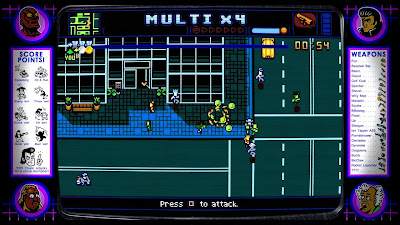 I rented Retro City Rampage through PS+ only because it was there, really. I knew nothing about it. Definitely didn't expect anything great from it. Now I know better. Retro City Rampage is an outstanding game, designed and executed masterfully. It's mostly a parody of Grand Theft Auto, but designer Brian Provinciano (who designed the game pretty much by himself) pokes plenty of fun at pop culture and the video game industry. It's a smart, satirical, very funny game. And it plays great too. This is a true open world game, with all the nooks, crannies, and side missions players have come to expect from the genre.