Gaming Discussion - A world with out Nintendo - View Post 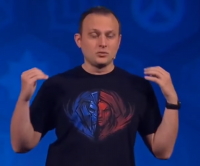 Innovalias on 20 February 2007
edit thread
Blip said: Kwaad said: I never liked the NES much. Most of the games were to shallow for me. The controls were good enough. I always stuck to playing computer games. . This seems like an odd statement from someone who is supposedly 22. Would you not have been born around the time the NES came out in the US? Being 22, it seems to me you would barely have been old enough to appeciate the SNES. I also agree with the sentiment of the thread's originator. I will stay loyal to Nintendo as long as they are around.
Lol. Don't take any criticism about depth from this educated 22 year old who obviously majors in business statistics and law. He says that the Wii is gimmicky... -Nintendo kept the Wii controller design, in spite of initial mainstream criticism. (Sony trashed the original ps3 controller design because of it's utter lack of popularity) -Nintendo never made empty promises about gameplay OR graphics performance. (Remember G4's interview with Jack Tretton? Sure, Mr. Sony, that Killzone footage is all real-time gameplay) -Nintendo never has resorted to 'bashing' another producer/developer (Random Sony higer-up: The Wii is an impulse buy) -Nintendo's NES originated the "depth" in gaming, despite what Mr. Gwaad, who apparently played the NES after it's initial hit, believes. -Nintendo seeks to broaden the video gaming audience. (Sony seeks to isolate lower-income and less hardcore gamers with overuse of technology and overall cost) I'm not a Sony hater, Mr. Dwaad, but I am a realist. The impact of Nintendo on gaming isn't something to belittle. As you so intelligently observed, Sony did get it's PS3 idea from Nintendo. Simply because Shigeru Miyamoto and company saved modern video games before you were ever born. Do you honestly think, had it not been for the NES and SNES that Sony would even be in the gaming biz? Sony designed games for both of those systems before branching off and developing the PS line.