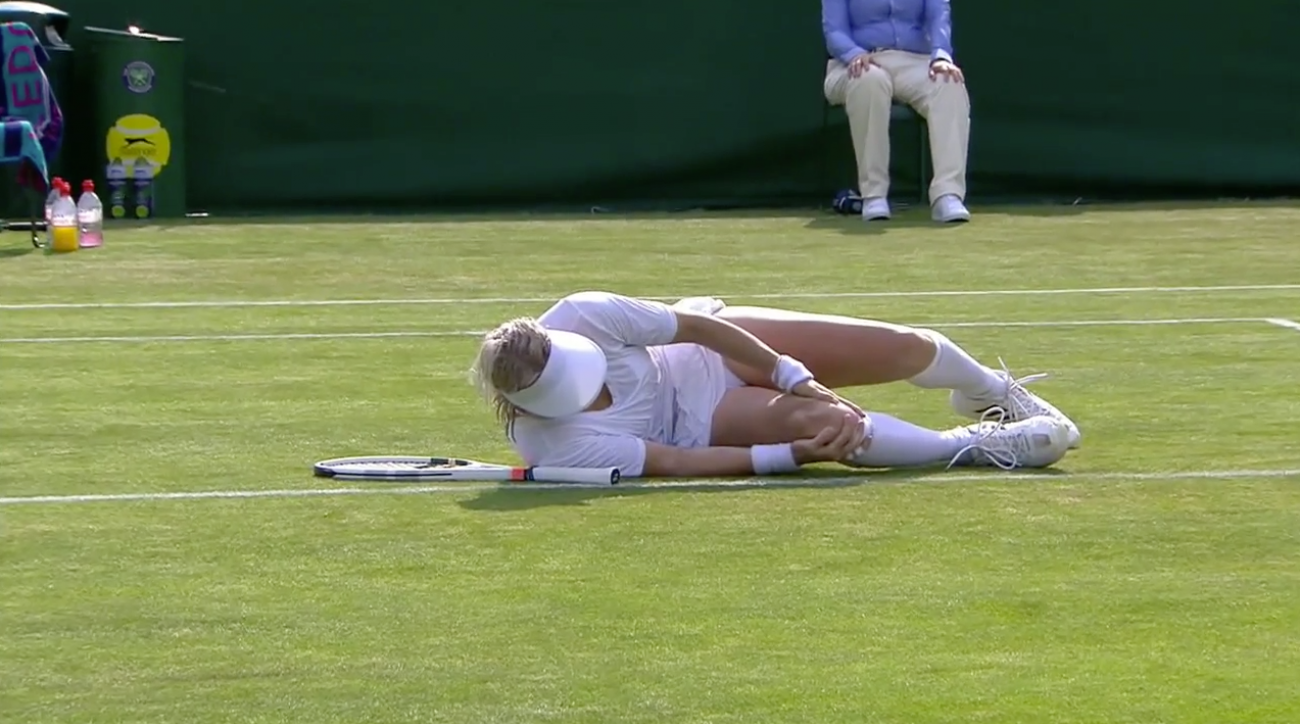 A dark mood fell over Wimbledon on Thursday night after Bethanie Mattek-Sands suffered a sickening knee injury that sparked complaints about the state of the courts at the All England Club and the speed with which the American was treated. Tournament organisers swiftly defended the condition of the courts and denied that Mattek-Sands had not been treated quickly enough.

Mattek-Sands, 32, could be heard crying and screaming out for help before she was attended to and taken to hospital after her right knee gave way early in the third set of her second-round match against Romania’s Sorana Cirstea on Court 17.

Elsewhere there was concern on one of the outside show courts in the match between Kristina Mladenovic, the 12th seed, and Alison Riske. Mladenovic gave an angry press conference after she lost in three sets to the unseeded American, revealing that both players had unsuccessfully asked the umpire to stop play because they felt the court’s surface was unsafe. She said she will have a scan on a knee injury after slipping over and that there was no more grass and even a hole in the ground on court 18.

“It’s quite unique with your opponent, after two games, you both agree on stopping playing in a slam,” Mladenovic said. “You ask the referee to tell you what’s the rule if both players don’t want to keep on playing. And the answer is that they just can’t do anything, unfortunately, and you have to keep on playing. I’m not sure how the other courts are, if they’re damaged that much as Court 18.

“The colour of the court, the fact that there’s no more grass, the fact the baseline where we are running, it’s very slippery. There’s no grass. I don’t know how to describe it. It’s not even clay. It’s not flat. If you look at the screen, it is everywhere where we are supposed to run. There was a huge hole on the sides where the referee came to actually take pictures of it. It was not even flat. I realised that because at the warm-up I kind of twisted my ankle.”

The problems are being blamed on the dry weather. “I’m not an expert at all on grass courts,” Mladenovic said. “I guess the climate doesn’t help, the fact that it’s too nice, too hot, to sunny, makes everything very dry. That’s what we got as an answer from the officials.” Mladenovic added that the ninth seed Agnieszka Radwanska, who beat the US’s Christina McHale, told her that playing on No2 Court was “horrible” and there has been lots of grumbling in the women’s locker room.

Wimbledon denied suggestions from Cirstea that the emergency services were slow to respond to Mattek-Sands’s injury. “The first response to Court 17 was within one minute, by a qualified ambulance technician,” a club statement said. “The player was kept on court while pain relief was given. The player was then transferred directly to an ambulance and taken under emergency conditions to a hospital.”

Tournament organisers said that court 18 had been inspected by the grand slam supervisor and assistant referee and that they “in their experienced view judged it playable as per normal”.