Forums - General Discussion - The Third Temple. How will it happen?

The Revelation book (Holy Bible) tells about the abomination of desolation (also Matthew 24 and Daniel 9) that the Antichrist will do in the holy place of Jerusalem.

Prophetic clock says that after that it will begin the countdown to Jesus Christ return as a lion, instead of lamb, meaning, return with glory, power and a vengeance against the demons and the wicked. It will be a time of tribulation before this happen. One could argue that the tribulation will last 3 and half years instead, since in the middle of the 7 year peace treaty the antichrist will order the death of the jews and christians in Jerusalem, and, after that, in the whole world.

Just one problem, how can the third temple be built if the place where it suppose to be build is Muslin holy ground?

And, Daniel and Revelation say that a peace covenant will be signed when the order to rebuild the temple is given. The Antichrist will be the mastermind of this treaty.

That is a amazing thing to consider: if we see a peace treaty signed with the clause of a rebuilding of third temple, that will mean that the antichrist is among us and the end is near.

Crazy to think that till 1948 all these circunstances were impossible, there was no Israel.

And now the circunstances are not there: there is no third Temple.

Since Daniel states that the order to rebuild the temple will come from the prince of darkness and it will be a matter of months till the great tribulation happens, how would you guys feel if we saw this in the news tomorrow?

The fig tree parable (Matthew 24) states that after Israel is restored, it can not pass a generation (80 years, acording to Psalms) till the Antichrist appears, which means that the prophetic clock is set to 2028 (1948+80) or less. So, the third temple rebuilt order must come before 2028. It could be tomorrow really, since Jesus said "a generation will not pass after the fig tree (Israel) is ready". 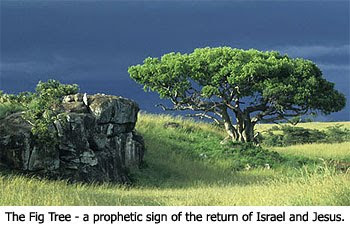 I think this is, at the same time, scary and exciting. I imagine this is totally meaningless to unbelievers, but I would like to read some comments on this very interesting and prophetic subject.

24 Seventy weeks are decreed upon thy people and upon thy holy city, to finish transgression, and to make an end of sins, and to make reconciliation for iniquity, and to bring in everlasting righteousness, and to seal up vision and prophecy, and to anoint the most holy.

25 Know therefore and discern, that from the going forth of the commandment to restore and to build Jerusalem unto the anointed one, the prince, shall be seven weeks, and threescore and two weeks: it shall be built again, with street and moat, even in troublous times. 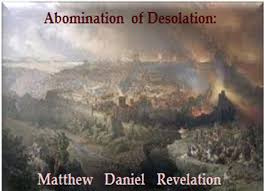 26 And after the threescore and two weeks shall the anointed one be cut off, and shall have nothing: and the people of the prince that shall come shall destroy the city and the sanctuary; and the end thereof shall be with a flood, and even unto the end shall be war; desolations are determined.

27 And he shall make a firm covenant with many for one week: and in the midst of the week he shall cause the sacrifice and the oblation to cease; and upon the wing of abominations [shall come] one that maketh desolate; and even unto the full end, and that determined, shall [wrath] be poured out upon the desolate.

And Jesus answered and said unto them, Take heed that no man lead you astray.For many shall come in my name, saying, I am the Christ; and shall lead many astray.And ye shall hear of wars and rumors of wars; see that ye be not troubled: for [these things] must needs come to pass; but the end is not yet.For nation shall rise against nation, and kingdom against kingdom; and there shall be famines and earthquakes in divers places.But all these things are the beginning of travail.Then shall they deliver you up unto tribulation, and shall kill you: and ye shall be hated of all the nations for my name's sake.And then shall many stumble, and shall deliver up one another, and shall hate one another.And many false prophets shall arise, and shall lead many astray.And because iniquity shall be multiplied, the love of the many shall wax cold.But he that endureth to the end, the same shall be saved.And this gospel of the kingdom shall be preached in the whole world for a testimony unto all the nations; and then shall the end come.When therefore ye see the abomination of desolation, which was spoken of through Daniel the prophet, standing in the holy place (let him that readeth understand),then let them that are in Judaea flee unto the mountains:let him that is on the housetop not go down to take out things that are in his house:and let him that is in the field not return back to take his cloak.But woe unto them that are with child and to them that give suck in those days!And pray ye that your flight be not in the winter, neither on a sabbath:for then shall be great tribulation, such as hath not been from the beginning of the world until now, no, nor ever shall be.And except those days had been shortened, no flesh would have been saved: but for the elect's sake those days shall be shortened.Then if any man shall say unto you, Lo, here is the Christ, or, Here; believe [it] not.For there shall arise false Christs, and false prophets, and shall show great signs and wonders; so as to lead astray, if possible, even the elect.Behold, I have told you beforehand.If therefore they shall say unto you, Behold, he is in the wilderness; go not forth: Behold, he is in the inner chambers; believe [it] not.For as the lightning cometh forth from the east, and is seen even unto the west; so shall be the coming of the Son of man.Wheresoever the carcase is, there will the eagles be gathered together.But immediately after the tribulation of those days the sun shall be darkened, and the moon shall not give her light, and the stars shall fall from heaven, and the powers of the heavens shall be shaken:

and then shall appear the sign of the Son of man in heaven: and then shall all the tribes of the earth mourn, and they shall see the Son of man coming on the clouds of heaven with power and great glory.And he shall send forth his angels with a great sound of a trumpet, and they shall gather together his elect from the four winds, from one end of heaven to the other.Matthew 24:4-31