We have a zombie problem. Yes, I wrote it right. I’ve just come back from a nice trip down the river along with my friend Ed just to find that Hell’s got loose in the streets. Those zeds are patrolling the streets searching for fresh flesh. The heck I’m supposed to do now?! Think, Marcus, think. I know what you’re thinking. You would have prefer to be taller, or to have a rounder nose. Perhaps shorten the length of your hair a bit. Have a stronger body overall. But you can’t change that. You just don’t “edit yourself” and “create a new Marcus”. You are Marcus, the afro, cardio-junkie man. You are a born leader. You know you have to stand for it. 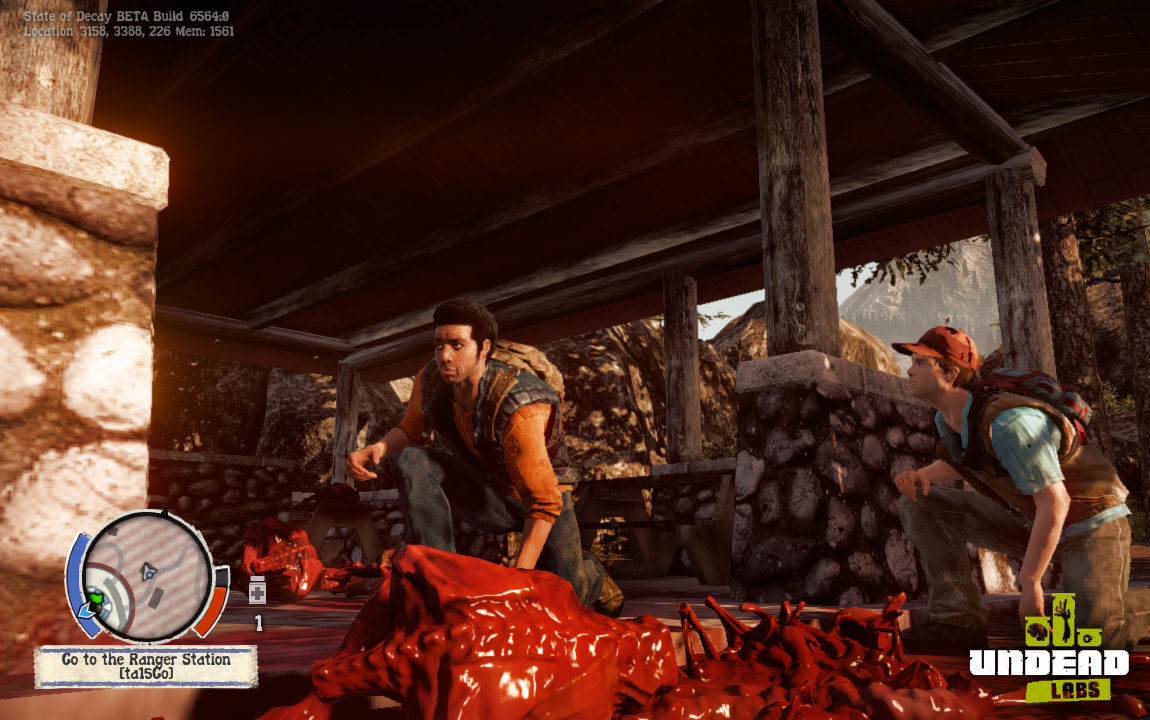 We’ve just reached a fort. People are nice in here, though anytime I want to chat to them they just all go: “hi” or “Good day”. “What’s up”. “Yes?”. But hey, they offered me shelter, so what’s not to love.

Exploring a bit, I just realize something: no one’s preventing me from entering any house, any gas station, any warehouse I can see. There’s always a door, a window or a rooftop which allows me to enter and search the place. And I shouldn’t say this but…it’s great! I can loot whatever I can find among the place. I can take my time, of course, but just like other skills, I can practice my wittiness so that I can level up and search more quickly next time. However, I should be cautious when looking around. If I hurry too much, I might break something while looting and thus zeds will explore the place, curious about the sounds.

That being said, when I loot there’s two kind of things I can grab: things that fit in my own bag, and heavy supplies, which I’ll have to create an improvised rucksack that will limit my movement when carried. However, if I managed to get back to the fort and give my fellow people the rucksack, our overall morale and supplies will rise. That will allow us to survive another day.

Of course, I don’t want to make this sound easy. There’s a tense danger anytime I get out of the Fort – namely, the zeds -. I have two ways of fighting these monsters: by using a close-quarter weapon (which can be bladed or blunt, or even my own hands) or a firearm. The first one is the most used option. I can smash them (or cut through) until they fall to the ground. Then, in order to avoid them getting up again, I have to finish them off with a strong attack to their head. This is easy done when there’s one, or two zeds. But when there’s a horde, running is the rule #1. There’s no point in risking it (Well, bonus XP is awarded!), because death is certain, no matter how skilled I am becoming. By using a firearm, with a clean headshot they stay “dead”. However, shooting any other part or limb merely delays their charge, and is a bullet wasted (When bullets are rare, and precious…!). Now there are those conventional zeds, but then we also have those “special” zombies. Zombies that (thankfully) are alone, but possess especial traits. The Feral, for example, can run quite fast and takes some hits until it falls down. That ugly fat I-don’t-know-its-name may explode when I’m near it, and thus that could probably mean the end of my adventure. I need to be cautious.

There’s so much to learn, yet.

Damn it! While I was “off”, I mean, while I wasn’t playing – you know, looting and killing around – things happened. One of the survivors went for supplies and died trying. If only I have been active! Guess what: shit keeps going on while I’m not at it. Now don’t take this the wrong way. It doesn’t go to the extreme that I should need to be on everyday just to avoid something bad. I could leave a week and nothing truly harmful would happen to the community. This was just…bad luck.

A lot of things have occurred during my time surviving.

Let’s begin with the weirdest. At first I just…ignore some things. I thought they could be produced due to those things I smoked back at the ship with my friend Ed. But no. They keep repeating themselves. The most notable one is some zeds clipping through buildings, or structures, like they weren’t there, at all. I do this too, sometimes, for example: jumping into a house through the window. For some reason, the glass don’t break (And I make no sound whatsoever!). Ground terrain textures sometimes disappear without trace. The draw distance is bad. Just bad. I don’t know how to explain this. Perhaps I want to punch a zed in the face, but I suddenly levitate to the other side of the house in order to deliver the killing blow. The worst part is that while this is not frequent, it is also not rare.

A lot of these “problems” mar the experience I’m having. They don’t destroy, but can break inmersion sometimes.

But enough with the technical aspects. There’s new things I’ve found. First, I can’t rely too much on my weapon. They break, and not having a weapon while fighting zeds is plain suicide. This makes me to rely on the resources I already have, or to go to a “friendly” fortress and ask for one. That’s right. I can get in contact with other survivors and exchange resources.

Of course, this also mean I’m becoming popular. I have more “influence” over people. I can use this Influence as currency to get better equipment and things among the general supplies that we have at base. My fame – that is, my reputation after I complete missions and requests – is what determines how much influence can I have over other survivors. I should not abuse this power, though. That can create problems.

Now that I’m speaking about this, I’ve just realize that some things are just poorly explained. I’ve discovered them the hard way; and sometimes it just doesn’t feel fair. Almost at the end of my adventure I discovered that my “leveling up” allow me to invest in some “special skills” that give me unique traits. No word about this advancements was given to me, and it was just simple curiosity that gave me the chance to discover them. Yup, things are poorly explained, there’s just no tutorial for these things.
But so far, so good. 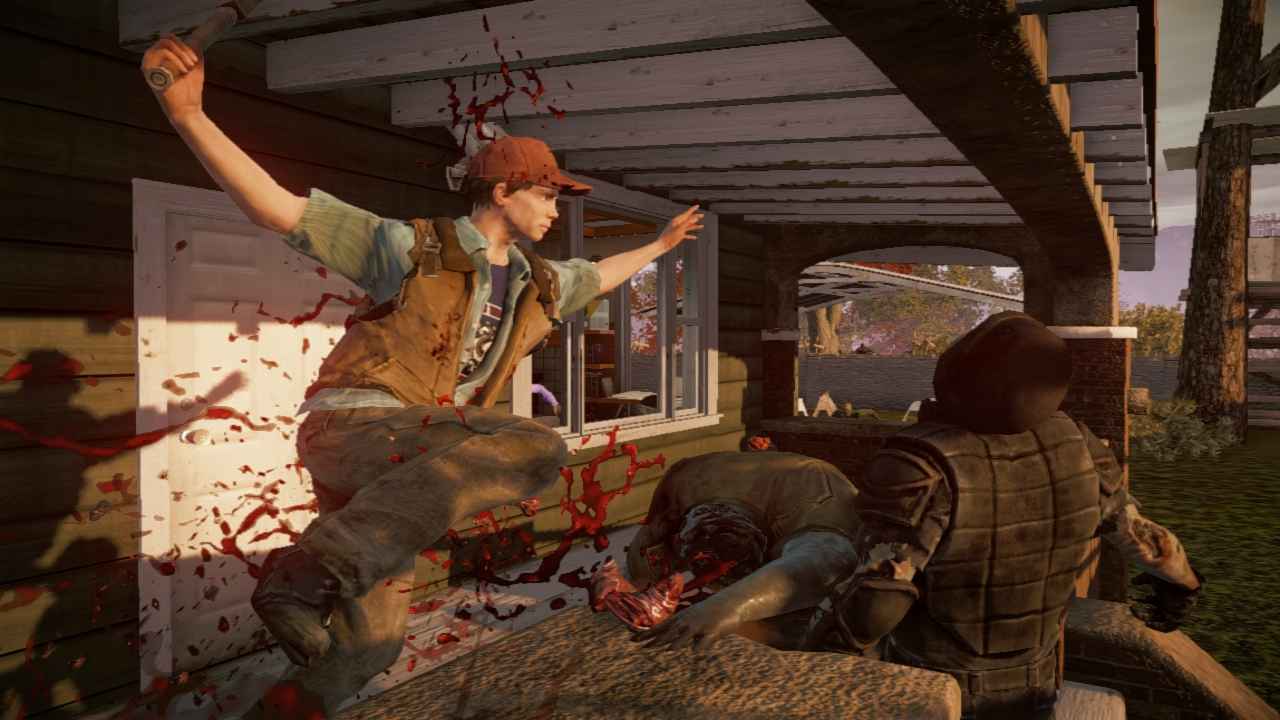 I know I haven’t pay much attention to you, diary, these past days. But shit, things have almost finished and I can breathe with relief.

I am a bit disappointed in how this story ended. I was having a blast fun (Yep, I’m kind of a psycho. I get to love killing zeds, despite watching them going through buildings far more frequently as I was finishing business), but I was also curious about how this was about to end. And the more I approached the credits, the punch-line of this Fable, shit just wrapped up without explanation or even proper ending. It was lousy, it was simple, and it didn’t last more than a few seconds before I knew that things had ended. I felt disappointed.
But I could come back for more. Rewind time just before the ending so I could keep up with the things I haven’t finished or for just explore a while. So the disappointment didn’t last long.

I have to say that, for the price I pay back when I was in the boat with Ed – I think, it was something like 1600 MP (Motorship Points), which translated in 20 dollars -, which eventually took me to this whole adventure, I say that it was worth it. Seriously. Even the last dollar was worth it. The contents in my adventure never ends. I can came back for more and I still have a blasting fun. Looting houses has never been so much fun, without the damned police looming all over the place. If I have to conclude I would say that unfortunately, the problems I talked about in previous pages are more frequent as I was getting to the ending point, but nonetheless no one was fun-breaking.

In all honestly, I heard survivors complaining. Of course this was not the perfect adventure. We are small people in a huge world (The map is damn huge!), of course we’re not going to like a lot of things. But, while you are not going to get invested in developing relationship between survivors or realizing how gray the morals in humans are, you are going to spend the rest of your days fighting for your survival, helping (or ignoring!) the needed ones and becoming stronger each day that passes. Because in this state, you can only kill or be killed. We left civilization back there, this is decay. We’re in a State of Decay.

SUMMARY: (For those who didn't get the underlined things =P)

-> Gameplay is totally addicting. (9'5 -> This is where the game truly shines)

-> There are a lot of technical problems that don't break the game, but can break the inmersion. They're not frequent, but not rare.  (7)

-> Terrifying atmosphere, huge map, and a dense sense of danger whenever you're out of the base. (8)

-> The game keep throwing things to the player. Sometimes this can be overbearing; and there are some quest that are just not that enjoyable when you have already done it several times (Like killing an especial zombie for a request).

-> No character creation. You get what you get.

-> A very horrible first impression when playing this game for the first time.

-> Price is fair for what you get.

-> No online or co-op play, though there's word of mention that an update will bring this.

You gotta play it. It's addictive, it's fun, you get tons of content worth your money and time. If you are a zombie lover, this is a must-have. If you think you've had enough of them, this change will game your mind. Seriously, it's a no-brainer (pun intended). Give it a try!

EDIT: A word of thanks to JayWood2010. His cheerful comments make writing these reviews something special!

Brilliant review! Pretty amazing how you managed to fit the survivor diary with a review together. Original and brilliant! XD

I played at my friend's house and it is really fun.

Yeah, looks like im going to have to play it myself.  Everybody has been saying good things about this game.

Just downloaded this! Hoping it turns out well XD

"You would have prefer to be taller, or to have a rounder nose."

Okay, that really cracked me up.

That was a fun read, I liked the style. Very good job. As for the game, reading that made me think of Fallout 3 without the story parts. Lots of bugs which you can overlook and lots of looting and exploring.

The only thing that puts me off, which is true for most zombie games, is that I can't care for FPS melee combat. Other than that, it sounds interesting.