When growing up N64 quickly became my favorite console for it's time mainly because of Rareware games like Banjo Kazooie.  It was such a brilliant game in every way and the sequel was no less amazing.  However as some of you all may know, not every game ages so well and it has been 13 long years since the original release of Banjo Tooie.  So let's find out how it stands the test of time on Xbox Live Arcade.

When first playing Banjo Tooie the first thing that you realize is the memorable tunes from Banjo.  You guys may know exactly what I'm talking about but the sound tracks in Banjo is catchy will be stuck in your head for days.  The menu is also done with crude noises like burps and animal noises.  The game is actually crude in many ways which I will get to in a bit but first I want to talk about the graphics.  For a 13 year old game Banjo Tooie actually looks pretty good and doesn'tmake me want to gouge my eyes out.  The colors are nice and vibrant with a good artistic style.  They also added HD in this version and polished it up a bit so it does look relatively better.

The story in Banjo Tooie is very humorus and never really takes it's self too seriosly.  It will have you laughing at times from the whitty humor between Banjo and Kazooie.  Banjo seems to be the friendly Bear that is a bit of a cluts who likes to joke, but Kazooie is a complete smartass.  Kazooie will tell any crreature, monster, or person what is on his mind.  For example some huge fish accused Banjo and Kazooie of trying to steal his jiggy and leave him to dry up and die.  Kazooie didn't really help the matter and just comes right out and says "Yeah pretty much the plan".  See always getting them into trouble.  They also reference how they are just in a game on multiple occasions like "Hey, didn't we kill you in the last game?"  Or things similar to that.  The game is filled with crude and humoruous dialogue all the way throguh the game and really helps you laugh and just enjoy the game.  The story isn't really deep though so if you are looking for a deep platforming story this wouldn't be the case, and honestly it wouldn't be Banjo if it was.  However Banjo's friend Bottles dies in the first scene of the game by Grunty.  After dieing in the first game and being stuck under a rock her two sisters comes and revives her where she then seeks revenge on Banjo.  This will setup the story nicely.  But since Bottles is no longer with them, who helps you learn new moves?  A new character by the name og JamJars helps you learn 40 new moves!  JamJars is a nice addition of the game being a military mole.  He will be your drill sergeant through out Banjo Tooie with advice and new moves. 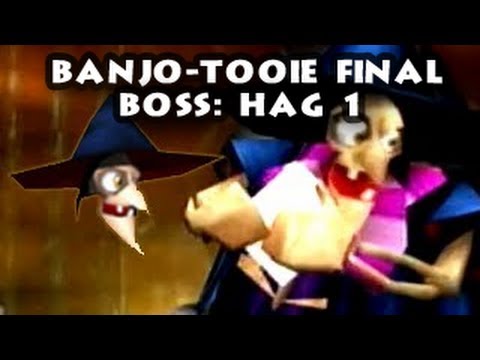 Now for the gameplay which is why this game truly shines.  The game is relatively easy when it comes to combat and because of this you don't really ever feel like you are in any danger but the platforming and puzzles is abolutely brilliant. In fact most enemies can be killed in one hit.  The bosses make up for this greatly though.The puzzles will also make up for this because you learn one new move at a time new puzzles  will be thrown your way that keep you thinking.  Your main goal is to collect Jiggies (Puzzle Pieces) and music notes to help you advance in your adventure.  Jiggies is what is needed to advance to the next world while Music Notes are needed to learn new moves.  It quickly becomes an addiction to collect all of these gold shiny collectables across the world.  One move that turned out to bring clever puzzles is the Split move.  Kazooie will hop out of Banjos backpack and they will have to complete goals seperately to help you with puzzles.  This often times made puzzles very fun and enjoyable.  Banjo Tooie also has many mini games through ut the game to change the pace up a bit like jumping through hoops, kickball, or using Kazooie as a gun like a FPS shooter.  To make things even better they also change up the pace by transforming you into different creatures.  You play as a number of different creatures from an Ancient Mayan, a van, and a submarine.  These will add to different puzzles and new gameplay elements. There is one new creature in every world and you are always curious in what is next.  However Mumbo Jumbo isn't the one who is tranforming you this time around.  He leaves that up to a character by Mumba Wumba a new character.  She like him requires you to find a little creature by the name of Glowbo.  You will need to give each a glowbo to use there special powers.  Mumba Wumba as someone who will transform you and Mumbo Jumbo for using magic outside of his hut.  You get to play as him by the way, so if you like him that is a big plus. Swimming under water has also been improved due to dual analog sticks but one thing that was not improved was th FPS parts.  I can't even explain how annoying those parts are but god thing you don't have to deal with it often.  Overall the puzzle and platforming elements is what makes this game shine so don't worry about the FPS parts too much.

Overall the game is nothing short of being a true classic that stands the test of time.  It still holds up today as being one of the greatest 3D platformers of all time for it's brilliant gameplay.  The story is humorus and the gameplay is great so if you haven't played this classic yet pick it up on Xbox Live Arcade.

Here is the An Unbiased Review Database. Looking for someone to review God of War Ascension if anybody is up for it?

Great game. In some ways even better than the first. The idea to connect all the regions of Banjo-Tooie into a single game world was ingenious, and innovative at the time.

Maybe one day we'll get Banjo-Threeie...