If you guys don't know I'm a huge fan of Metal Gear Solid and games that use stealth mechanics successfully.  Over the years we have seen a number of games to successfully use stealth in it's gameplay like Metal Gear Solid, Splinter Cell, Deus Ex, ect  However when we look at Mark of the Ninja what comes to mind?  "That's an arcade game, it can't possibly compete with the best of the best in the stealth genre.  Not only that, but it is a side scroller...."  I know this was the first things I thought anyways.  How I couldn't possibly be more wrong about this game, and how I couldn't possibly be any happier.  The reason this game has been talked about being the best arcade game of the year has been for a reason, so let's talk about it. 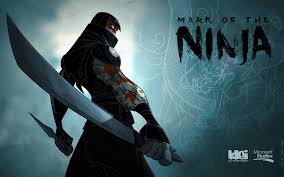 To start things off let's talk about the bad, the actual story.  The story is about a ninja, yeah I know that is pretty surprising, but stay with me.  The story is pretty generic and uninteresting in a whole.  It is about a ninja who will be assassinating his hits (Like a hitman).   He has one partner who seems to help you throughout the game.  She says very little other than helping you throughout the level.  You also have a boss that says a few things every once and a while.  The cutscenes are pretty nice looking.  I know right, an arcade game with cutsecenes.!  But yes the cutscenes have a cartoonish look to them, very nicely done actually.  However the cutscenes themselves are uninteresting.  Basically your Ninja gets tattoos on his body and more talking that is you guessed it, uninteresting.  I can't really say too much about the story it's self because there isn't much but the main thing I want you to get clear is that this game is not about the story.

Now that we got the bad out of the way, let's talk about the gameplay and stealth.  The gameplay is purely based off of stealth and getting to point A to point B.  This is a very interesting take on stealth gameplay seeing as it is a 2D sidescroller!  As a ninja you are taught to hide in the shadows and use your surroundings to elude the enemy.  From the beginning of the game I was hooked.  You start the game out with nothing but a grappling hook and ninja darts (stars).  You can use the ninja stars to destory lamps and headlights to either distract an enemy or to completely elude them by hiding in the shadows of the dark.  You can also hide behind pottery and doorways while an enemy walks right pass you.  You have the option to run as well but if you do enemies can hear you.  Not only will you lose points for an enemy spotting you but you will also likely die.  It takes roughly 2 shots to kill you.  This is why it is ideal to stay in vents, shadows, and use your equipment to evade the enemies.  Speaking of equipment, their is a lot of it.  You can unlock equipment through out the game including poison darts, noise makers, smoke bombs, and wait for it......A box to support Metal Gear Solid.   When I saw the box, I couldn't help from laughing about it.  Hideo Kojima would be proud, in fact if he hasn't played the game I suggest him to do so. You can also unlcok new suits like the staelth suit that allows you to run without making noise for example. Another interesting take on the game was the fact that you can terrify people.  You can do this in a number of ways including killing someone in front of another enemy without being spotted.  What this does is it freaks out the enemy and he will shoot anything that moves including his partners.  The coolest way to terryify someone in my opinion is to assassinate someone and then hang them on a post by a rope.  This will traumatize any soldier walking around.  This game isn't easy either.  It can be tough at times.  They will throw a number of soldiers at you including ones you can't assassinate.  There is dogs that can sniff you out, snipers that can spot you, or elites that you can't assassinate in a regular fashion.  Enough about the gameplay though, all I can say is if you like stealth this is a must have game.

In the end this is a unique twist on stealth games.  It has everything a stealth game needs and competes with the best of the best and in ways is the best of the best.  The lack of a great story is upsetting but as an arcade game you really can't get much better than this game.  It is on XBLA and Steam so if you haven't picked it up yet go out and get it.

Great review btw, don't really care much about the story but the gameplay seems really good, I'll definitely pick it up when it's cheap.

lol Yeah it was $7.50 on both Steam and XBLA last week.  I should have reviewed it sooner so people could get those deals.  Anyways it might be $5 during the next big steam sell :)