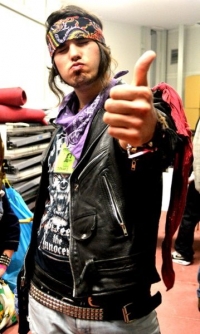 XD at your sig

That has to be the funniest post I have ever seen on VGChartz, that deserves a friend request.

ditto to the bees knees one.

For a band that's been around since 2000, their style seems quite old-school.

noname2200 posted something on EL_PATRAS's wall:

Hello! You are formally invited to join us for the 3rd annual Wii Secret Santa event. Please join us before December 15th! http://gamrconnect.vgchartz.com/thread.php?id=120261

What Nintendo "Developed" game do you want to see with the Wii U launch?

in Nintendo Discussion on 25 January 2012

smash bros all the way...

We VGC users are 10 year old's who are ironic/annoying fanboys and don't have a life...

From within your posterior it must be blown....

Favourite Games: Its already been said, but i consider ocarina of time the best game ever, and majoras mask the best zelda game ever(go figure). Closley followed by Banjo Kazooie, Mario 64 and Galaxy, and all the Donkey Kong country games for the Snes. After that, Im inclined to say Zelda TP, Super Mario all stars for the Snes(the game that introduced me to the gaming world) and TMNT IV arcade. Others such as dune, medieval total war, guitar hero, pirates of the caribbean(the first one) Diddy K Racing and mario kart on the snes, have all taken up too much time of my life.

Favourite Books: Catcher in the rye and the island of the day before(Umberto eco)

About Me: Goofball type of guy who likes to spend the day doing nothing, until night comes and its time to hit the city...

The Legend of Zelda: Ocarina of Time (N64)

EL_PATRAS has 27 friends (view all)