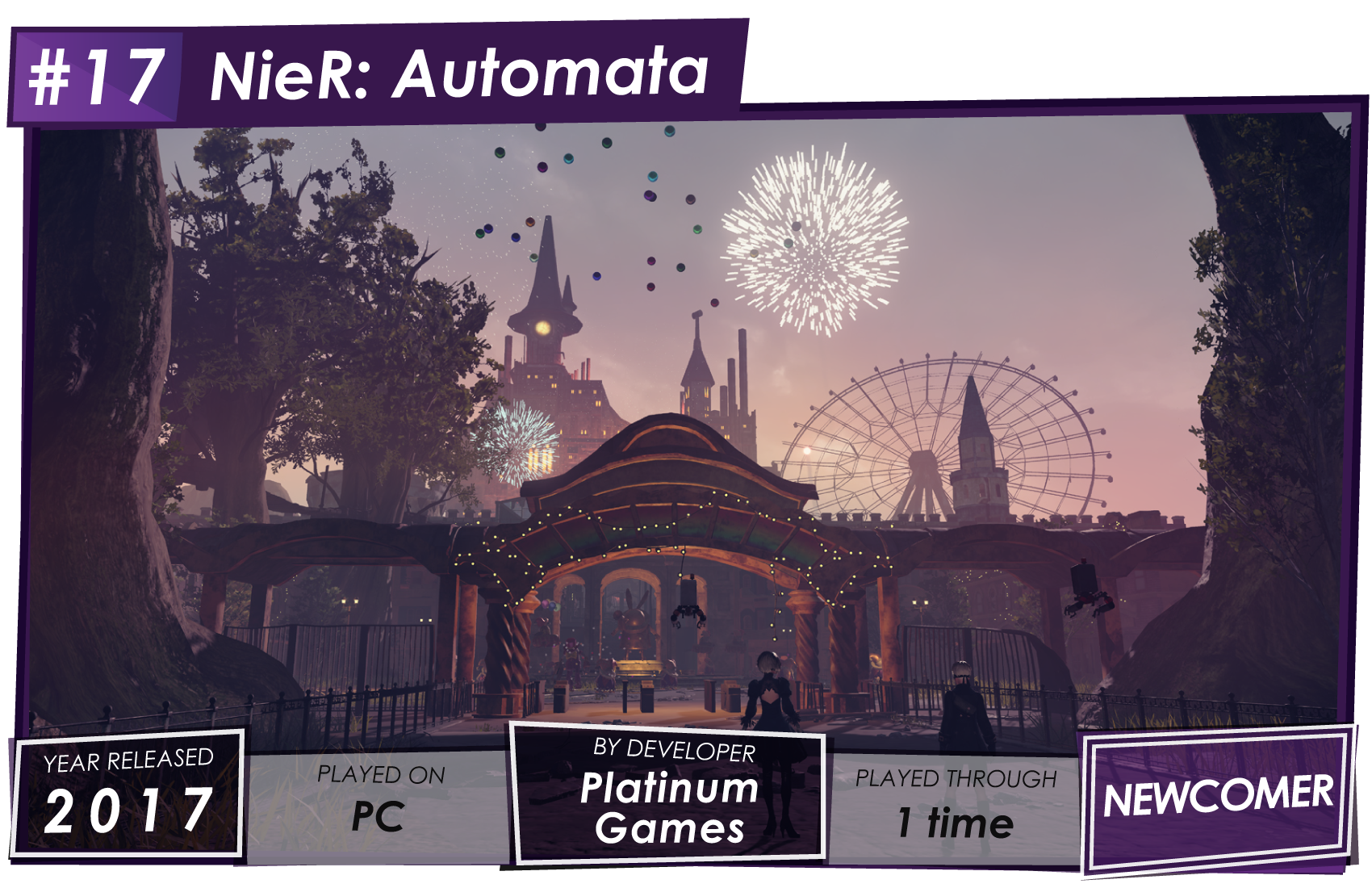 This was one of the weirdest ones to rank for me, in large part because it was the last game I finished before making the list and there wasn't a lot of time to let it sink in. But also, it was a really weird one for me due to a thing I don't normally experience: expectation.

NieR: Automata was defined by the expectation it carried. It's unfortunate, really. If this was a mainstream game, highly anticipated, maybe things would have gone differently. But because it was a rather niche title that became more well-known over time due to its reception, well... It meant that everyone I know played through it at different points in time. So, at release, the guy who loves Platinum Games was raving about how amazing this was... then, a while later, some other friend I know was raving about it... then, another while later, another friend, and so on. It meant that, for more than three years, it was never uncommon for me to be hearing great things about NieR: Automata. It was nonstop, really. And because it was so highly praised by people I know to have similar tastes to mine, I expected to like it as much. I couldn't help it, really. Furthermore, I was quite spoiled on the game's progression system, meaning there was no element of surprise in that one for me - and to make matters worse, it also made me expect the game to have a lot more content than it actually did. The ending could have otherwise been very climactic, but because I thought I was barely more than halfway through, it was quite the opposite for me.

So yeah, it's weird. I normally do a good job of avoiding expectations when approaching any work of art, but I failed at that with this game, and it unfortunately impacted my opinion of it quite a bit. Maybe at #17 it doesn't quite look like that's the case, but for real, I thought it'd easily stroll into the top 10, maybe top 5, because that's how highly the people I know praise it.

The reason it still makes it this high is, well, it's pretty obvious. It's well-known at this point. NieR: Automata is highly praised for its story and soundtrack, and indeed those two are very, very special. The art direction here is quite stunning too, and the gameplay remained fun throughout the whole game, though it didn't come without its issues. I disliked it whenever the camera shifted to a top-down angle arbitrarily, because I felt like the game was taking control away from me. I disliked most of the boss battles, as they mostly consisted of boring HP sponges you just have to hold down R for long enough. I disliked the RPG elements as I felt they kinda conflicted with the game's hack-and-slash combat system, the stuff Platinum is so well known for. I also disliked it when a cutscene came along and had those hideous half-transparent black bars on the screen.

It's just... I don't know, despite all the awesome stuff in this game, I can't help but always look at the negatives. I don't know why this happens, really. It's even worse when I know that most of the things I dislike about it were deliberate decisions by the director. I list NieR: Automata at #17 because of how amazing and striking the game was - and man there were some really, really memorable moments -, but I just find it so hard to talk about everything I appreciate in it. Maybe next year I will learn how to do that, who knows. In the meantime, I'll let everyone else talk about how awesome the game is.