I am joining this thread. I live for RPGs.

Glad that you joined OTBWY. The thread might not have the activity of it's glory days, but hopefully we can continue it's spirit.

Given that so many awesome RPGs are coming out this year, I hope we'll see some activity around here :D

I still can't believe this thread was necro'd and is so damned old. 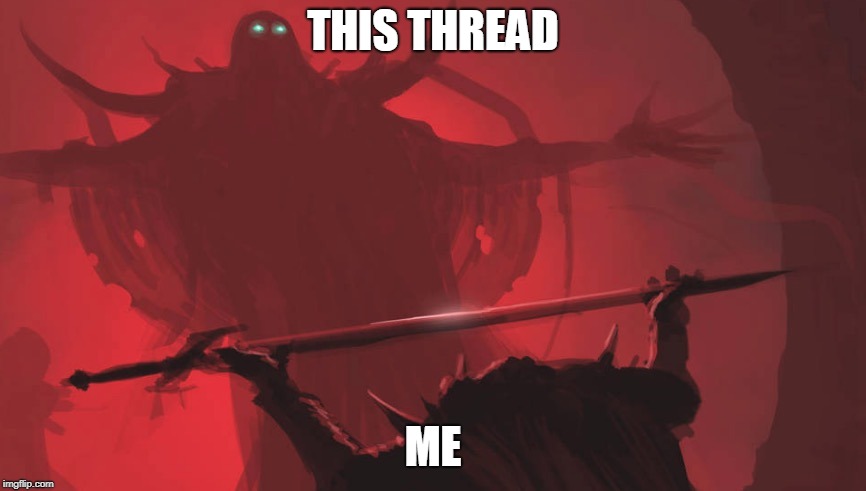 wow blast from the past i remember this thread lol

Well this is a thread to keep an eye on

We brought out Skeeuk :D.

Started playing one of my Winter Steam sales purchases, Immortal Unchained. For anyone interested, it fuses the typical game-play of a TPS game with the overall structure of a soulsbourne game and also adds some sprinkles of metroidvania elements into the mix.

Your character build is still heavily reliant on how you invest in the main attributes in this game (Strength, Finesse, Perception, Agility, Toughness, Endurance, Expertise & Insight) which in turn affect not only how much the stats of your character scale individually , but also have some additional bonuses like faster Reload speed, faster Dodge, higher health recovered when using med packs, etc.).

Instead of focusing on the typical melee weapon assortment of other soulsbourne games, on this game your main weapon types are guns. Distributed between Primary (Assault Rifles, Auto Shotguns, Launchers, Sniper Rifles and Compact Guns), Secondary (SMG, Pistols & Shotguns) and melee weapons (which in this game are only sort of backup weapons when you're out of bullets), you can plan a really wide variety of different builds, depending on how you want to focus your character on.

The way enemies are handled in this game also plays into this build variety pretty well. Most enemies have glaring weak-spots, like their head or big orange reactor-like thingies on their backs, so you can play as a high-risk/high-reward kind of character that's always up close in shotgun range while falling back to their melee weapon should; you can be a mid-range kind of character with your Assault Rifles/SMGs keeping enemies at bay; you can be a stealthy sniper picking off enemies before they can see you or should any of these fail, you can fall back to your melee weapon as well.

Keeping up with the soulsbourne theme, there's a central hub area linking all of the other areas in the game (which is only accessible after passing through a sort of tutorial area). Even though all areas in the game are split between 3 different planets, there's elements linking all of them (like portals locked behind doors that require certain types of rare key items).

Alongside those portals and keys, another metroidvania aspect of the game is the gradual unlocking of special bonuses for your armor. Instead of having different armor sets, you have armor shrines scattered all through the game that unlock more functions for your armor, along a nifty visual bonus of adding more armor layers to your character avatar (you start "naked" and with every armor shrine you unlock you gain another layer of armor).

I would recommend this game for someone that enjoys the Souls genre games and who is looking for a different take on the experience. While the game does have quite some flaws (there are some balancing issues, the 3rd planet suffers from a severe difficulty spike when it throws teleporting snipers into the mix, some weapons completely outclass others for a large portion of the game, the gameplay can be a bit clunky & clumsy at first and it takes a while to get the hang of it), there's a lot of variety to keep things fresh which also force you to rethink your strategies and your approach and it lives up to the whole "git gud" spirit of the souls-genre.

Thanks for the info on Immortal Unchained, but from what I've seen, I'll be skipping this one.
While I really like Souls, other games that I tried that have similar mechanisms (Lords of the Fallen and The Surge to be exact) didn't really do much for me.
Even Bloodborne, from little that I've played, fell flat. I guess this is due to me liking Souls so much is mostly about setting and level design, and less about combat (which is honestly quite average).
Haven't tried Nioh yet, or that indie Zelda-Souls crossover Inferno Climber.

It's completely understandable. The Souls series has the formula down to a T, with it's world building and how the lore is spread around all those seemingly random tidbits that connect to a large overall story. In this aspect, all other games in the genre do fall flat to me as well.

Hi all
Just decided to give : horizon zero dawn
Another try, this time playing it on my playstation 4 pro.
Also bought , dragon quest 11 for ps4
Might double dip on that game when it launches on the switch.

What's everyone else playing ?

If anyone wants to add me on playstation 4 , please go ahead.

What rpg is everyone playing ?