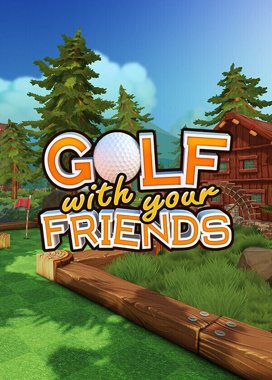 An unorthodox choice I'll admit but it's one I gotta include for the sheer amount of fun I've had with friends on it. A constantly expanding selection of maps that are all expertly designed and fun to continuously replay, a wide selection of modifiers to mess around with such as colliding golf balls, zero gravity, etc., and a whole community workshop of maps, mods, and more to add even more stuff to the mix. It's an incredibly simple game but packed with content and one of the best to play with friends online

#41
- The original heroes continue to fall away, as this time they both have to be saved.
- The playable characters conform to the traditional colours for a girl and a boy.
- A bit strange that these characters weren't present when this series took a jump into 3D, as they could have fit right in.

#40
- Good guys, bad guys... doesn't matter which, both have a chance of feline fine in this game.
- What once provided a chance of invincibility now provides duplication.

#39
- More forgiving than its predecessor when you’re trying to collect those precious jewels.

#38
- A game that was retconned by the man who was heavily involved in introducing the gameplay model it uses... so much so that many of the games in this series with this style are commonly referred to using a portmanteau that has part of his name, and part of the series the games are from.

#38: Castlevania: Symphony of the Night

As the great Meat Loaf once sang... two out of three ain't bad. 38 is incorrect, but very close.

Good thinking, but the game is much older

Oh I think you're talking about Bloodstained: Ritual of the Night.

Nope. You were closer with your previous guess.

Might as well start with the next set of hints, stay ahead of the curve.

-"What began as a conflict over the transfer of consciousness from flesh to machines, escalated into a war which has decimated a million worlds."

-Heavily inspired by a series known for its relaxing nature

-Betrayed by one she loves, the girl seeks vengeance, and embraces her role as the Lord of Calamity

-Picking up one year after the events of the previous game, the empire has annexed another region during that time, and you find yourself heading a new class of military students

-Lust for revenge rarely ends well, for anyone involved