I tried a different browser and was able to log in this time. No code yet, though.

Funny thing is that the CG trailer felt unimpressive, like a lower quality Fortnite trailer... I'm a bit concerned that as F2P game, the budget is lower than it deserves to be...

I actually didn't sign up for the beta lol.

Got a lot on my plate right now, and I'm working to clear my backlog on my off time, but I'm grateful for the offer!

What about it felt that way for you?
It didn't feature every character that's in the Alpha (let alone who will be in the starting roster on launch day), so I imagine there will be more cinematic trailers like that before launch.

As for the game itself, it feels to me like the complete opposite so far.
And it seems like the consensus in the fighting game community is that it feels very polished and oozes WB money, even in its Alpha state. 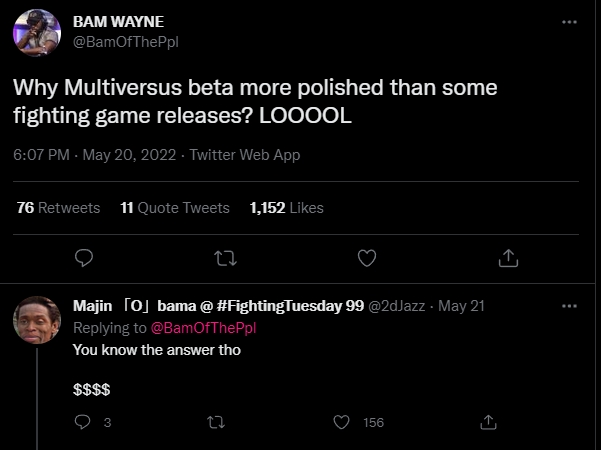 Maximillian streamed it the other day, and was really impressed by the character animations. He even went as far as to say that Tom & Jerry may be the best animated fighting game character he's ever seen. (And he studied animation for 10 years, and is obviously big into fighting games.) 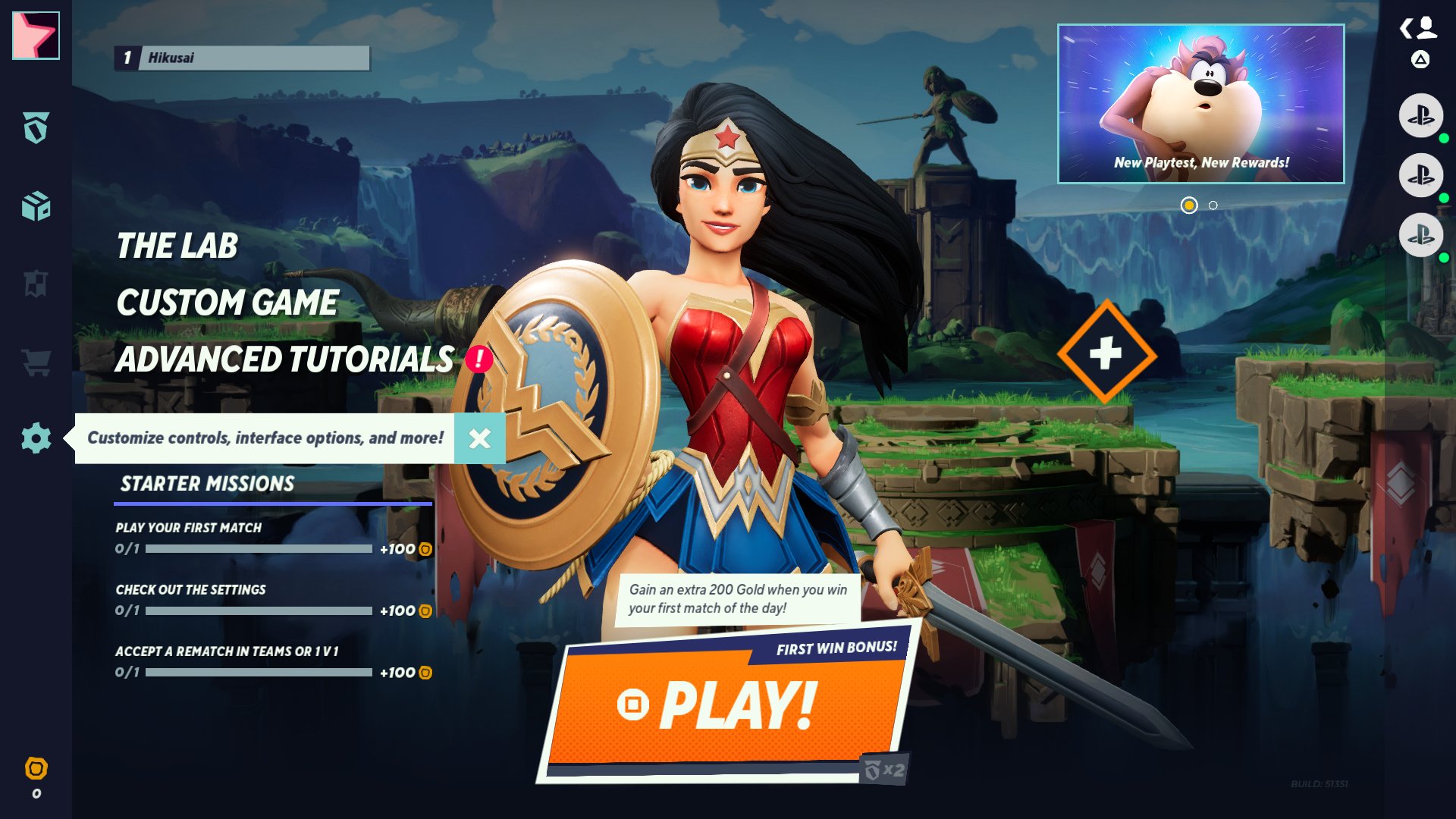 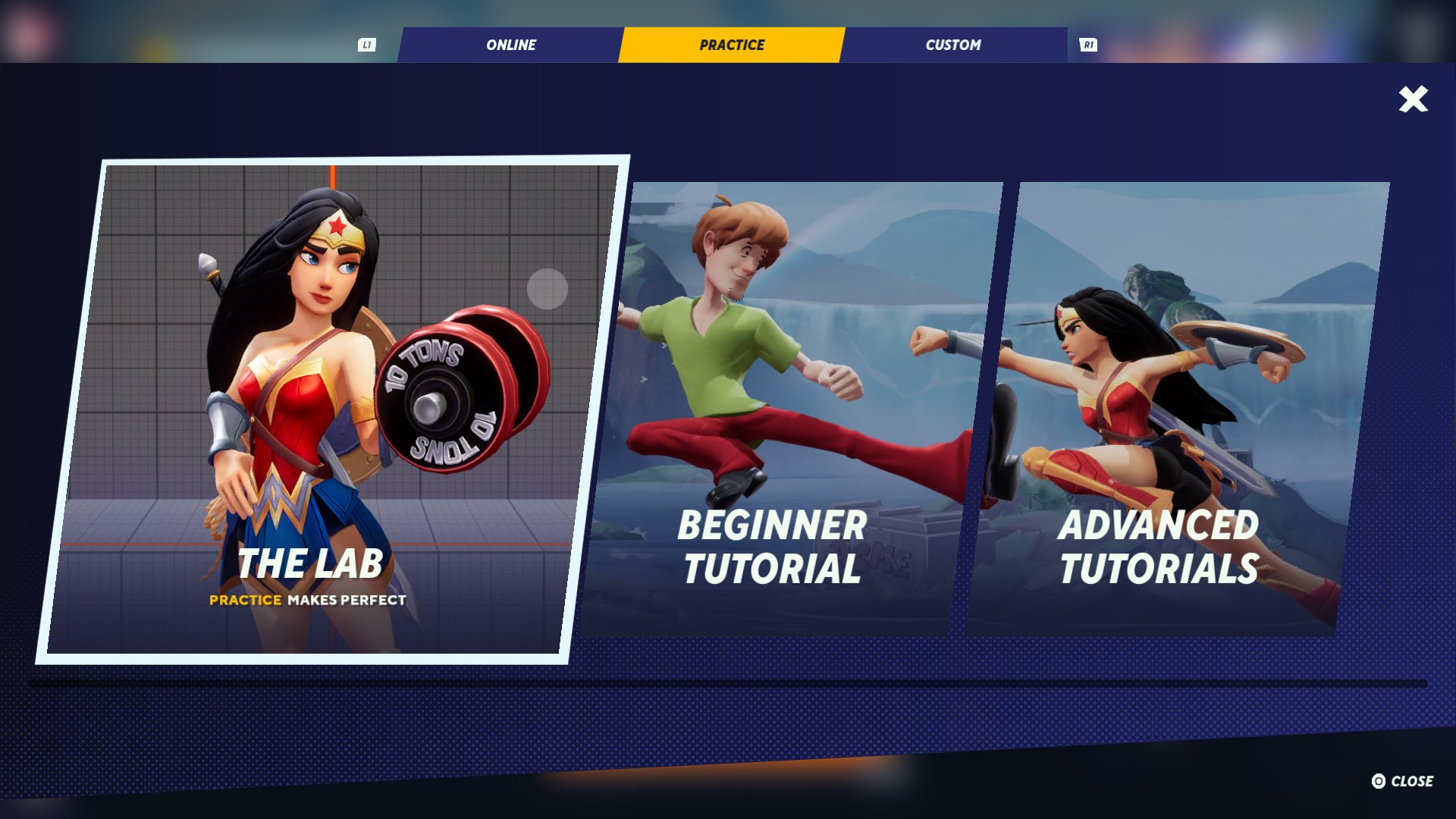 I like the layout of the menus, and the look of the characters is very Warner Brothers like.

Velma is similar to Phoenix Wright in Marvel vs Capcom 3, and then there are a lot of other quirky characters that I don't even know who to compare them to.

Another thing is the voice acting. On top of getting the original or current voice actors for these characters, I noticed that they have specific lines recorded against specific characters, and when teamed up with them.

Here's one between Batman and Arya Stark

“You ever stop and wonder if dedicating your life to vengeance is a waste…? Yeah me neither” - Batman to Arya Stark In #MultiVersus pic.twitter.com/JIy2EQaLxW

And when you beat up a character, your character may start talking shit about them, with specifics that apply to that character. 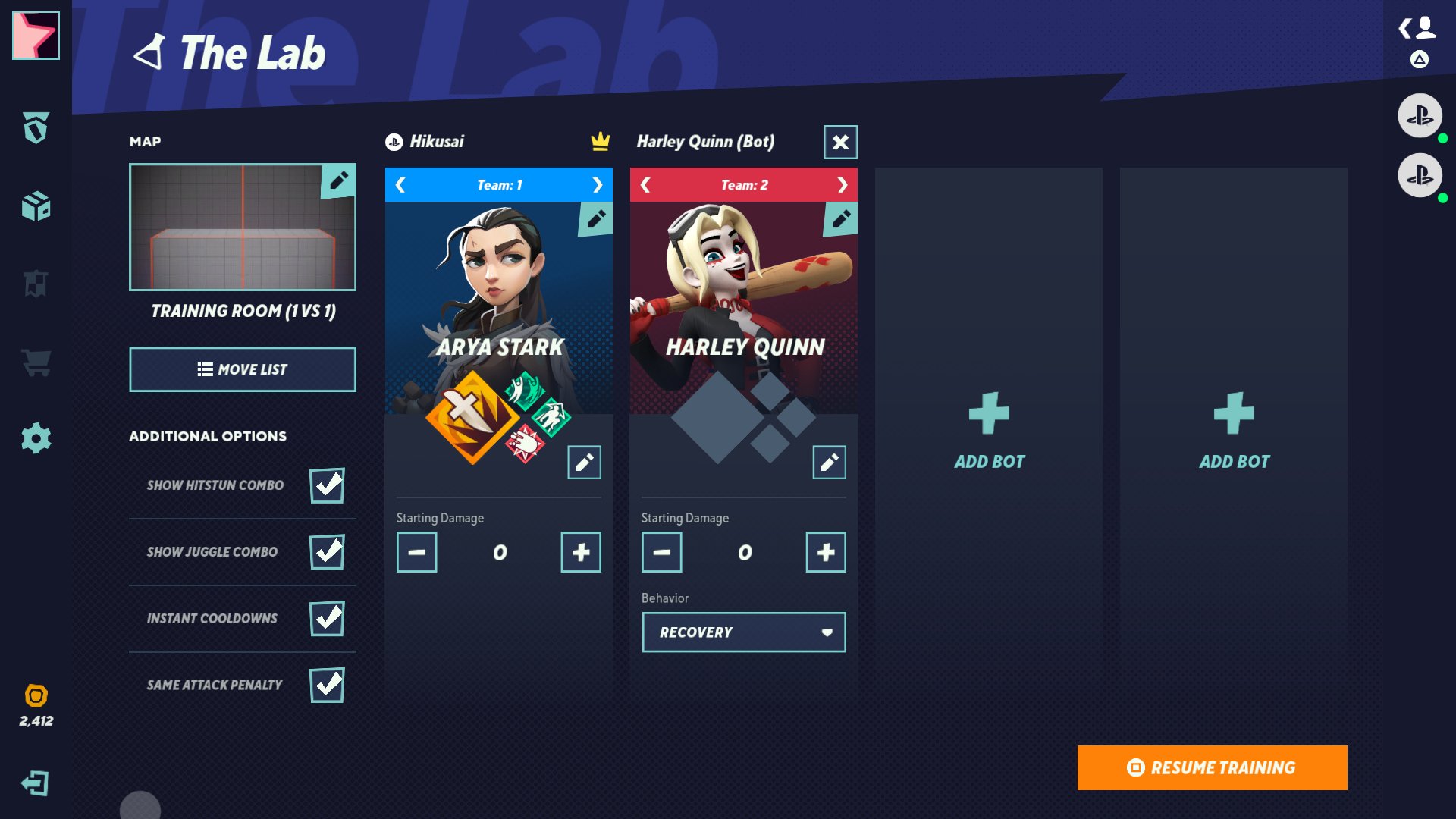 Every time you play, you feel like you make some progression because there are a lot of fun things to unlock.
The icons below Arya in the image above are passive abilities you can unlock and equip to make your character play different from another person using the same character. And there are a lot of those to unlock. They can also resonate with your teammates skill, if you equip the same type of abilities.

Each character has some sort of co-op oriented ability in the movelist that helps their team mate btw, as the 2 v 2 mode is something the devs want ppl to have fun with. 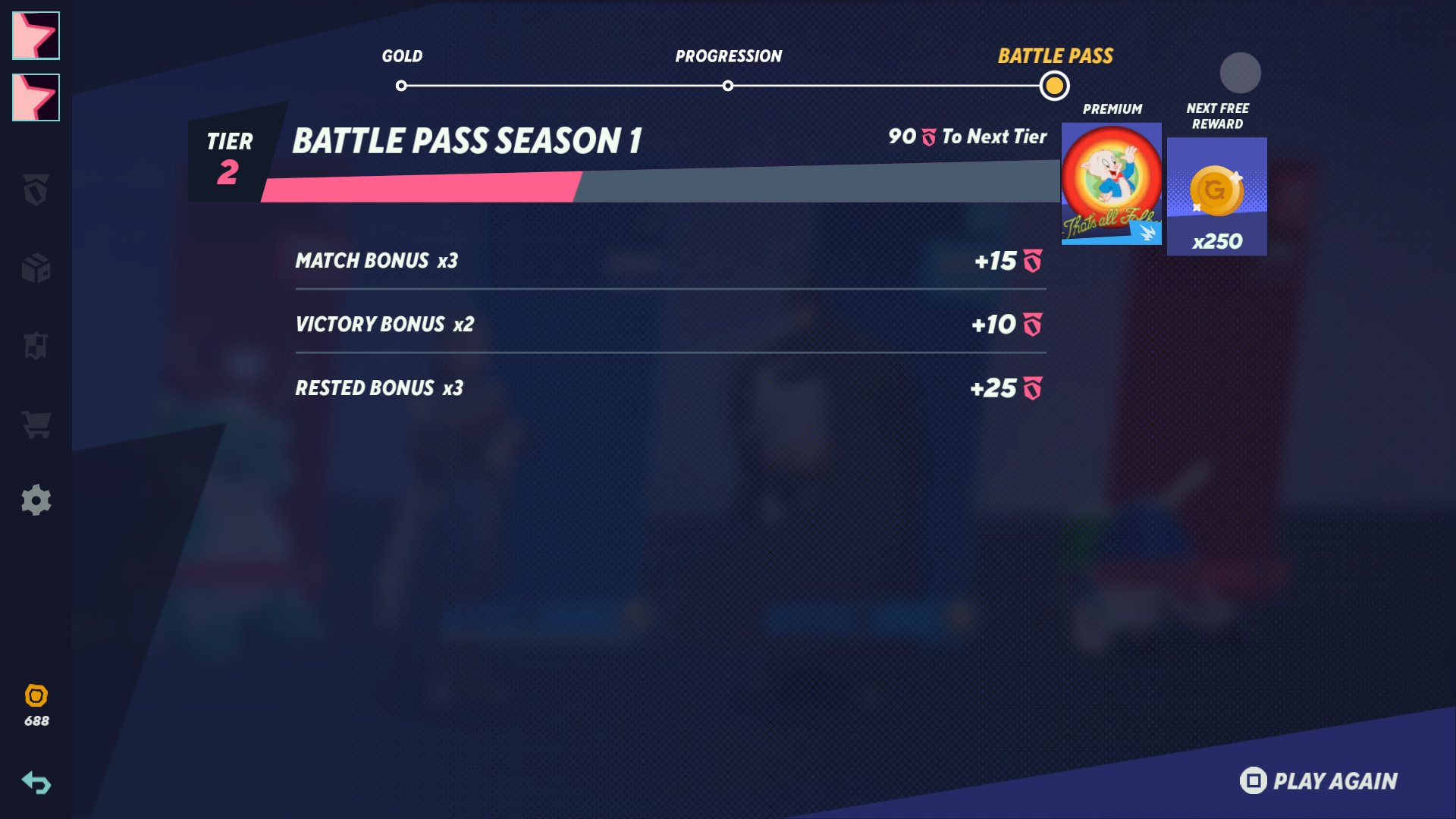 Here's me getting it after I knock out a Tom & Jerry.

But there's another interesting thing in that clip.
Notice Tom's death scream. If you've ever seen the show, you should recognize it. He has several different ones, and they are all hilarious and nostalgic.

The devs said that characters will be unlockable for free.
Looks like they'll mainly monetize on cosmetics like skins, taunts, knockout animations, announcers, etc.

Very impressed so far. Can't believe this is F2P.

The game seems pretty solid so far, though I haven't really found a character where both the personality and moveset really speak to me. Closest would be Bats so far.

I'd love to see Johnny Bravo make the roster at some point. He'd be a lot of fun.

It could very well be the skeptic in me, but it's also true it's really not out, yet.  That, and I've had plenty of GOOD experiences with F2P games.

At the same time, I'm also very immune to the "new shiny thing" that tends to happen when people play new stuff.  I didn't say it looks BAD, I said it seems underbudgeted.  That could ALSO be the fact that I'm watching/seeing some VERY iconic characters, so my expectations go up.

I mean, there was a lot of hype around Nickelodeon All-Star Brawl, and it's just... there, now.  I'm worried that this might end up the same thing even though they're using F2P to draw in that initial wave of millions of players.

I ALSO accept that none of these games will have the legacy behind them that Smash Bros does, so it's REALLY hard to touch that level of staying power.  So yea, I'm simply skeptical.  Skeptical is not negative nor positive, just me looking at it curiously and wondering why the CG cinematic didn't have the "punch" of polish it probably deserved considering the roster we're looking at, and how F2P games often have a lower initial investment by the developers/publishers because they're operating at a loss until the microtransactions start paying.  Of course, the irony of this is that I've been working on a video discussing F2P and MTX, though not quite in this light lol

I started with Arya, who I think has the moveset that mainly speaks to me, but she seems to have very vulnerable hurtboxes during her attacks, and lacks knockback on her moves compared to many other characters. So I find it difficult to knock enemies out with her.

I learned Velma after that and shes pretty fun and quirky. Gathering evidence and calling the police is fun, and her spike attack is really strong.
Most of her special moves have cooldown though, and doesnt seem to have a great knockout move aside from her spike, but at least her hurtboxes seem fine while she attacks.

Then I tried Harley Quin, and she seems extremely powerful in comparison to the other two. She has ridiculous hitboxes on several of her moves that also hit enemies BEHIND her consistently, resulting in both enemies getting caught in my attacks often, when one tries to save the other. Her hurtboxes on several moves seem really good too so she rarely gets hit out of her attack animations, and she has crazy knockout power on almost all her normal attacks.

F2P games can definitely be good, but I'm also more skeptical or cautiously optimistic when it comes to that model. (Diablo next week for example)

There was hope for Nickelodeon All-Star, but there was also a giant red flag right away. That it wouldn't have voice acting, which is a huge thing to miss out on for franchises that used dialogue to convey so much of their charm.
And Nickelodeon launched for $60.

If you're curious to try it, the devs may give you a code if you reach out to them if you havent already.
Or a faster method may be to go to the code sharing section of the official subreddit and ask there. MultiVersus (reddit.com)