I am not expecting the PS5 to sell as well as the PS4. Even if there weren't shortages. All due to much stronger competition from Microsoft. By the time shortages are over or at least much improved Xbox will be firing on all cylinders with its first-party lineup.

I'm not ready to count out the PS5 just yet; the pent up demand for it is enormous and once supply improves sufficiently it could get a second wind in life like the Switch did in 2020.

Well, obviously we still have our bet.  And it's clear that the two of us have radically different views on the outcome of the PS5.

@The_Liquid_Laser only you bet on the PS5'22 that will be as less as possible (the weaker bet option was 10-15M for the year) when almost everyone said more than 15M.
So credits for this. You just might get it right. Even though PS3'08 year wasn't strong (10.4M) by this point in time PS5 is around 600k behind .. which is very bad .. It is questionable if even 10M will be reachable for it this year, although I believe it can hit 10 and even 12M because I think shortages will be way less going further in the year and especially the fall.

There is no telling how long the shortage will last.  It could be a couple of more months or it could last all year.  That alone will have a large impact on just how much the PS5 sells this year.  However, even when the shortage ends, I don't expect PS5 sales to greatly rocket upward.  We'll see.

Do you think you can still win that bet?

You should look at a PS4 vs. Switch graph. That would make it evident that it's not the same pattern.

And with Intel's CEO now expecting the semiconductor shortages to last into 2024, the PS5 will be capped at an annual pace of ~15m, unless Sony is willing to pay more money per unit for their parts. So even if the PS5 somehow experienced a Switch-like surge later in its life, it's not going to catch up anymore, let alone pass the Switch line again.

If you're saying you think it's in your favour currently I'm genuinely perplexed by that though you are right it would be best to wait till then before going into depth on it so we can do that then sure.

Nintendo Switch Outsells Lifetime PS4 Sales in the US 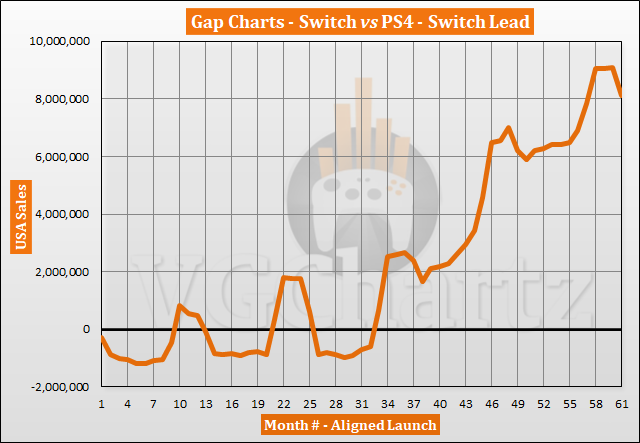 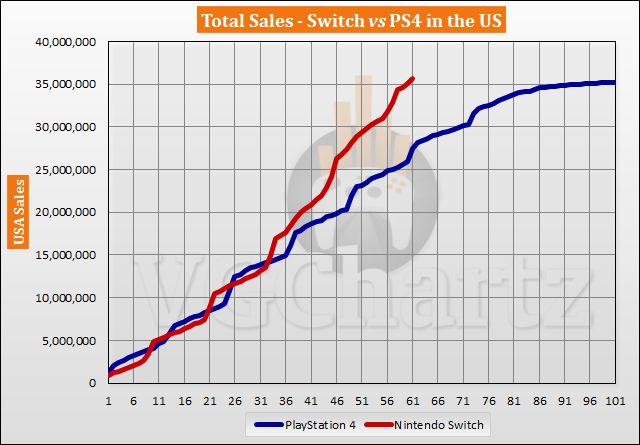 March 2022 is the 61st month that the Nintendo Switch has been available for. During the latest month, the gap in the US grew in favor of the PS4 when you align launches by 961,412 units.

The Nintendo Switch has now outsold lifetime sales of the PS4 in the US. The Switch with its 35.62 million units sold in the US is ahead of the 35.25 million units the PS4 has sold in its lifetime. With PS4 sales quickly dropping off, the Switch will only continue to grow its lead over the latest PS4 sales.