I think we all wish that economic policy differences are all we had to disagree on, but they're not in the same category as forcing women to give birth to their rapists children, or permit discrimination against how people are born, etc.

Refusing student loan forgiveness is a fair criticism against the current administration in an of itself. But it's also something that conservative politicians would never ever dream of supporting while in power. They'd rather give more tax breaks to the most wealthy, while people can't afford medical bills that are many many many higher than anywhere else in the industrialized world.

I'd take Covid regulatory suggestions more seriously from people who are not so incredibly selfish that they can't even be bothered the slight inconvenience of wearing a mask for a few minutes awhile they go shopping.

And please elaborate on the "highest inflation in US history" and "open borders" claims.

The inflation rate appears to be the highest it's been in around 40 years, though I don't know about ever.

Either way, these inflation rates are almost entirely attributed to Covid 19 affecting production all over the world, and Russia invading Ukraine, which soared gasoline prices by over 50% compared to last year, and oil by 70%. The invasion also jumped food prices by 8.8%. The highest since 1981. Partially because Ukraine and Russia are among the largest exporters of wheat in the world.

All of which are largely out of the U.S. governments control. What they can do is begin to break away from dependence on Russia's energy blackmail.
If only some politicians had warned us about the many dangers of dependence on fossil fuel years ago.... 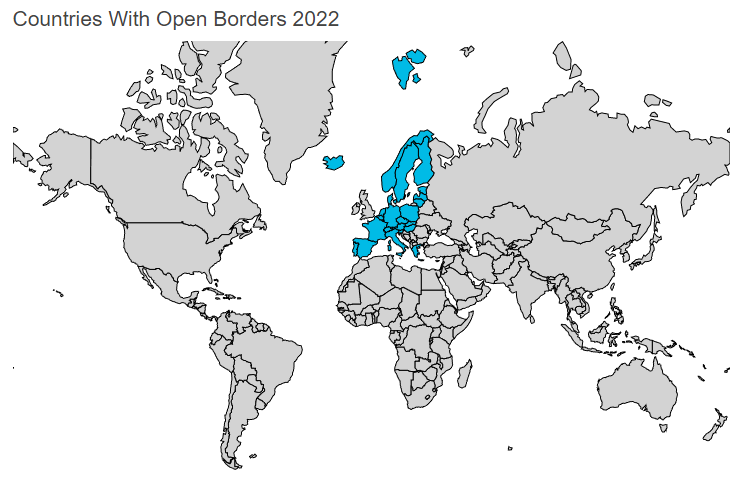 Just because Fox News says so doesn't mean USA have open borders. But even the countries that do still have border control and laws and restrictions for who can and cannot move around freely. (i.e. citizens of the European Union).

Not giving your microphone to someone spreading harmful disinformation ≠ censorship for science.
You can still shout about it somewhere else. I don't have to give you my microphone while you do it.

For those debating the severity of the pandemic, considering that the last time a disease killed this many people in this short of a time frame was the Spanish flu from just over a century ago, I'd say that qualifies as "once in a lifetime." In the U.S. alone, nearly a million people died because of this disease in just a two-year span, resulting in a significant spike in overall deaths, so I'd say certain policy measures to combat it were more than justified.

Of course, certain "once in an x" events have become more common due to climate change, so in a similar vein there's a non-zero chance we could have another major pandemic on our hands at some point before everybody alive today has passed on.

In any case, the pandemic was made a lot worse than it needed to be because of people who have a warped, childish concept of "freedom," the ones that lashed out, sometimes violently, when they were asked to do the most minimal of things for the sake of public health, all because they confused inconvenience with tyranny and invoked some claimed "conspiracy" against them to justify their selfishness. I spoke at length about this a couple of months ago here, but that sort of toxic individualism, that "You're not the boss of me!" attitude, that belief in freedom without responsibility isn't just immature, it's dangerous. It's probably no coincidence that the nations with the highest per capita death count from COVID-19 are ones that have cultures that tend to emphasize the individual above the needs of society rather than ones that tend to emphasize the reverse.

I'm constantly amazed how so many people, esp. Americans (and doubly so American right-wingers), are willing to put their lives and the lives of others at risk to avoid being inconvenienced. I see it every day on the highway. Some people simply don't believe that they have any responsibility towards others, and that the law doesn't apply to them, but rather only to people they don't like (esp. those deemed part of an out-group). Unfortunately, this behavior is actively encouraged by cranks, charlatans, and grifters in the media and politics.

So yeah. Social media platforms and other websites with user-generated content that banned people for spreading COVID-19 misinformation were absolute justified in doing so. They were also justified in banning people for spreading the Big Lie that the 2020 election was "stolen," another bit of nonsense that got people hurt and even killed. The government might be unwilling and (legally) unable to prosecute people for spreading dangerous bullshit, and some officials are even encouraging people in their reckless behavior, but that doesn't mean private property owners have to platform that garbage. There has to be some sort of accountability at some point.

And one last thing about the American right's backlash against social media after Saint Donnie and other notable lunatics got banned, I find their reactions utterly hypocritical, though hypocrisy has been their stock-in-trade since at least the Reagan years. They spent decades preaching the gospel of laissez-faire free-market capitalism and claiming that any government interference in the market, however slight, is literal communism. But the moment private property rights were used in way that inconvenienced them, they threw away those professed principles and demanded Big Government solutions to their problems. Not that railing against government power while simultaneously using Big Government solutions when it suits them is anything new with the GOP. DeathSantis is continuing that proud tradition in Florida as we speak.

Well if we're going to use the moot point deflection, then what do POC's have anything to do with the crazy left which is what's being talked about here? Unless you think the POC's fit in that category, in which case you said that portion of the left is crazy and is being ignored.

As for irrefutable reality, everything the Republicans do isn't racist, though it's almost always claimed to be nowadays, at least by the crazy left. To also believe that every single Republican and Republican controlled government is automatically going to be worse for you is absolutely illogical. Nobody is forced to vote and for good reason.

So a good point means nothing if it doesn't lead to furthering the argumentative portion of a discussion? Since when is this was a requirement?

The problem is the federal government trying to force every state, and all voters in them, to adhere to Democrat or Republican bills and laws. Beside what's already been widely agreed upon and established that makes the country a whole through federal government, each state should be left to it's own devices. Most who really don't like or won't accept a states politics will vote them out, or leave, and eventually the state has no choice but to change for the better or pay the price.

Allowing the system as is to work is slow, and causes some chaos and pain, but works out best. Forcing the system from the very top down, causes more and more chaos, and eventually major pain.

Lastly, I realize no state would ever be even close to 100% conservative or liberal voters, so yes, it'll never be close to perfect for everyone, but it's not about being perfect, it's about being the best it possibly can be at this point in time. The best way to do that, the majority of the time, is to focus on smaller separate groups, not a focus as if all are one.

I support Musk and agree that free speech has been severely and unjustly curtailed online.

If you didn't make such an effort to twist my words, you would most likely not confuse yourself so much.

Do you think Elon is confused?

The first Google result for "Elon Musk freedom of speech" is a Twitter poll posted by him where he asks if Twitter adheres to free speech. The first two visible responses to his poll explain that Twitter is a private company, not a government.

So there's no doubt that Elon is confused.

Then I am in good company.