Alright, lets do this, lets get this started with the hints and the guessing and the lists and whatnot. I love lists.

My hints are gonna be very easy tho.

49.- This game's kind of underwhelming 3rd act almost completely erases the amazing 2nd act it had.

48.- Nintendo introduced fantastic characters in this game that later decided to never use again.

Shout out to the raccoon for doing this whole event and to my mom for always believing in me.

Ok, here are my hints:
#50: TRAINS (and other stuff, gods, demons, alternate dimensions, ghosts, possesion, magic and what not)
#49: you jump alot, all the time, nonstop (you could guess the franchise maybe)
#48: blocks (guess that's an easy one)

#49 Was going to say Jump King, but I don't think it's a franchise. And probably not Jumping Flash because I doubt that's on anyone's top 50.
#48 Minecraft

50.- You are obviously correct!

Never heard of Jump King nor Jumping Flash. It's an a bit more popular game. 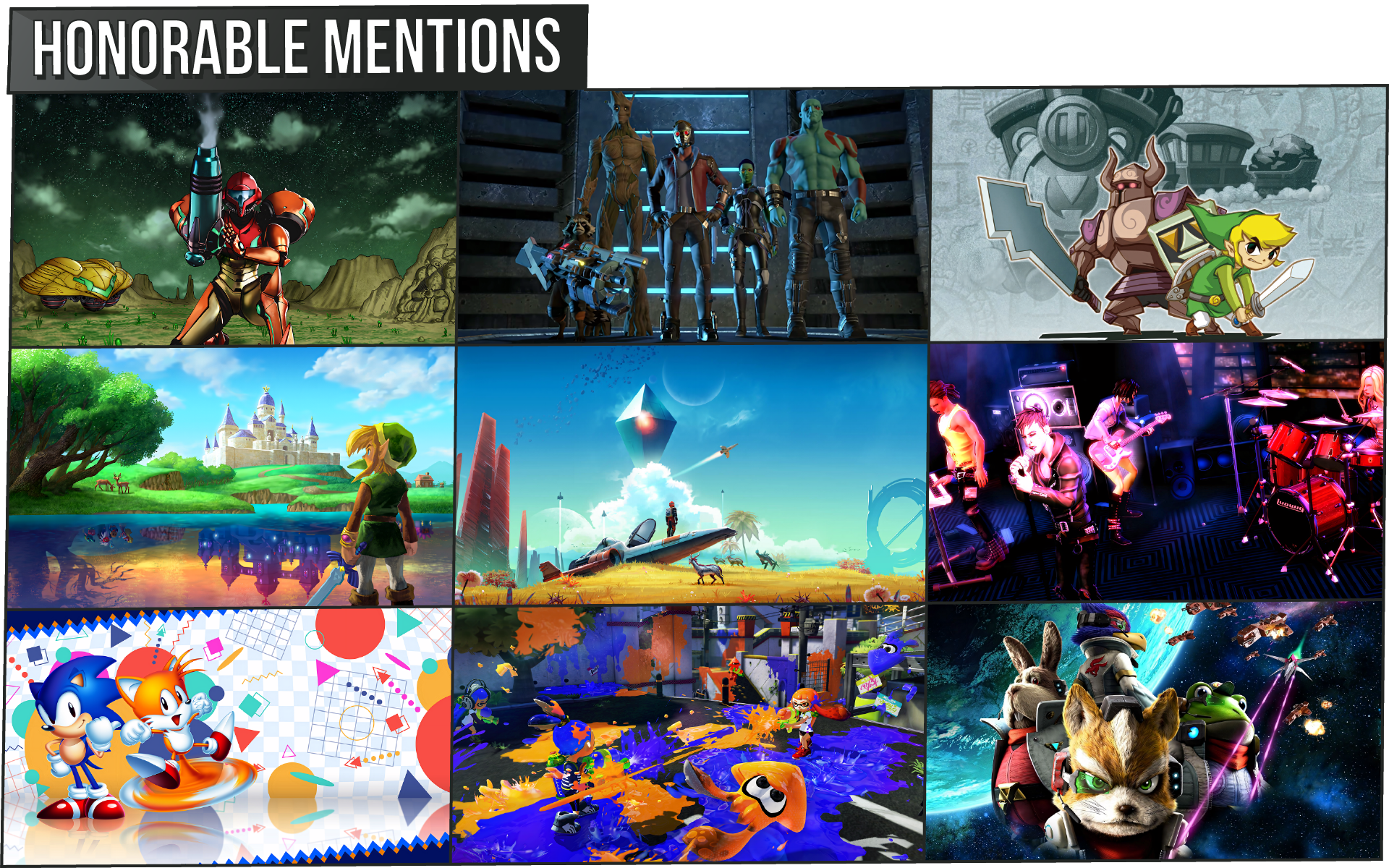 Alright, time to get things started here. These are my honorable mentions for this year - just like last year, there's 9 of them, because that's how many were close to making it in, but unlike last year, I'm not sure these were too close. Well, some of them, maybe. Normally I pick these because they are something I want to talk about for specific reasons, but this time it really is just the ones that barely missed out, though a lot of these share a similar trait in that they simply don't mean as much to me as they used to.

Honorable Mention: AM2R: Return of Samus
This fan remake of Metroid 2 was a very impressive project, in that despite being made mostly by just one guy (who later got hired to work on what became one of my favorite games), it felt more like an official game than just about any other fangame out there. I played through this twice around the time it came out, but since the release of the official Metroid 2 remake, Samus Returns, I never went back to it... until this year, that is. And maybe it was due to the way I put myself through this game, but I really didn't enjoy it like I remembered. So, here it is. It might never be on my list again, but it does bring back good memories.

Honorable Mention: Guardians of the Galaxy: The Telltale Series
The only game to be named here in both of the last couple years. Gotta be honest, this one is here moreso as a "game that barely made it into the honorable mentions", rather than one that almost made it to the actual top 50. I had Grand Theft Auto: San Andreas here until the last second, when I decided I liked having this here instead (which means maybe I should have had 10 honorable mentions instead?). This is the only Telltale game I've played, for obvious reasons, and it's... fine? It has an interesting enough story and likeable enough characters, but only just enough to be enjoyable without breaking away from stereotypes. It feels generic in a lot of ways, and too much like it's trying to imitate the movies. What this game doesn't understand is that to truly replicate the magic of those films, you need to be creative and original like they were. But still, it is a nice ride with the Guardians of the Galaxy, and even if it isn't their best version, I'm always happy to be with them.

Honorable Mention: The Legend of Zelda: Spirit Tracks
After seven years, the steam train game finally drops out. I guess my name is not Jonathan Brown and I don't like steam trains. Anyways. Spirit Tracks was a really fun time for me back in the day, but the thing is, it's reaaally back in the day. It's been so long and not only have I never replayed it, it's been many years since I last felt like it. The game has a wonderful soundtrack and I loved its story, dungeons, and bosses. But there comes a time when it's just a distant memory.

Honorable Mention: The Legend of Zelda: A Link Between Worlds
Oops, got the alphabetical order wrong here. So. I may have been too harsh on A Link Between Worlds over the years. This was a super fun game, one I've constantly judged harshly because I don't feel it does a good job at being more than that, but it is unfair to not give it credit for just how much fun it was. People have good reason to love it, and maybe I should replay it someday.

Honorable Mention: No Man's Sky
When I put this at #50 last year, I said that it's because that's where I like to put games I know won't be coming back to the list, and while that has proven true once more... No Man's Sky was certainly the closest to making it back in again this year. I still stand by the opinion that this game isn't fun at all, but it still has that thing that keeps drawing me back to it every now and then. I'm not sure what it is about it, but somewhere in there, it means something to me. Even if not much.

Honorable Mention: Rock Band 3
This being at #35 last time was the highest a Rock Band game has been on my list in a long time, but this year is the first time entirely that there isn't one. It was high last year because of how much fun I had playing this in the first few months of the pandemic, and it's dropped this year because I haven't played it since. Pretty simple, really. I don't think I'll ever be completely over these plastic instrument games, but I do think their time on the top 50s is over. And that's okay.

Honorable Mention: Sonic the Hedgehog 2
This is one of the first games I've ever played, if not the very first. My earliest memories date back to a time when this was already something I played, and it means something because of that. But it's been way too long since I last cared about Sonic. It's the trend here with these honorable mentions, but this game was just a distant memory by now, and thus it's getting dropped. That said, it's one I still treasure significantly.

Honorable Mention: Splatoon
The first Splatoon game was the freshest thing around when it dropped, and injected some much-needed new life into the world of Nintendo IPs. It was awesome, really. But it received a sequel that outclasses it in just about every department, on a better console, so there really isn't any reason to ever go back to it, and indeed I haven't. The single-player campaign had a banger of a final boss, though. But really, that's about it.

Honorable Mention: Star Fox Zero
This is another one that kinda felt like it was inevitably gonna drop out sooner or later. When Star Fox Zero came out, I played through it all in one sitting, and it was absolutely awesome... and, well, that was it. The game had too many big issues that became glaringly apparent in replays, one of those being its lack of replayability in general, and it's only stayed in the list this far because of that first playthrough.

So. Pretty negative post this, huh? Lots of uhh, "yeah I liked this but now I don't, get out of here". Maybe I should approach these write-ups more positively from here on out, but this is kinda how I felt about these honorable mentions. Anyways, time to get on to the list proper.

#49 Mario then? But there are many games where you jump just as much, if not more, and there are other more distinct features to describe the Mario series than jumping, so I'm not sure.
#48 Tetris?