I know it's a sensitive topic for some, however this is great news to me. Its showing the industry working together bringing more games to more people, much lime when PC games cross to console. It will be an odd adjustment seeing games like GoW and Uncharted in the same library as Halo and Gears.

Consoles are expensive here, but gaming PC even more. Someone complaining they had to pay 500 USD (I would say it was more like 400 at the time GoW released) certainly wouldn`t have a gaming PC that matched the console. For you to have an idea right now a PS4 here costs about 800USD (taxes and all included), 4400 BRL, a RTX3060 only already costs 4000BRL and a 3070 is 7000BRL. Over here someone that could make a rig that would match the PS4 at the time or a PS5 right now aren`t the ones that would complain about having to buy a PS4 (and well, considering that right now PS4 used costs more than a PS4 new at 2018 because of dollar rise, they could just sell their PS4 and recoup all that money).

Well, Zero is a know person on VGC =] (just not sure why only a topic ban since he was doing things that would be general ban).

I'm a PC gamer that is perfectly fine playing a game with a controller if it feels better. I believe I played the Arkham games vis controller rather than mouse, for example. Many of us are versatile.

It's coming before the Uncharted collection. 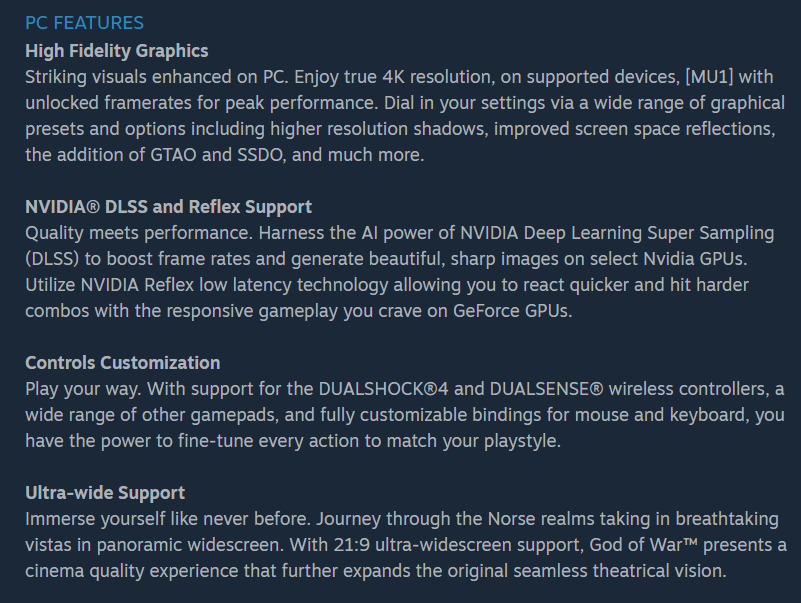 Let me just say, I’ve played a few hours on PC and it looks and feels spectacular. Controlling Kratos with a mouse and keyboard is a trip. I can’t wait to play on Steam Deck. https://t.co/M7xTZXRlfr

PCs sure are expensive, but it's a bit silly to say just because someone has a PC, they can buy a console. My PC cost about R$6000 when I built it in 2019. I bought each part separately over the course of the year so the price was spread out, that way I could pay for everything. I could've bought a PS4 with that money, and if I had it today, I could've bought a PS5. But I bought a PC, and now that's that. Just because I spent that money before doesn't mean I have it now (and indeed I don't), unless I sold my PC which I don't want to do for obvious reasons.

And it's not like the reasons for buying a console and buying a PC are the same. Beyond playing games, I use my PC for work, browsing the internet, watching movies and sports, listening to as well as writing and recording music, and more. Whereas a PS5 I would use only for games, and maybe watching stuff. So it's really not comparable. To a lot of people, it's worth it to save up and get a PC because of all you can do with it, but not worth it to buy a console just for a handful of exclusives.

It's nonsense that kids nowadays are more 'tech savvy' and thus into PC. When I grew up we were very tech savvy, soldering together our own sound cards for 286 / 386 PC and also a stereo adapter for Commodore 64. (It just separated the low and high sounds between left and right, a gimmick) Fact was, consoles were much more like PCs with MSX, C64, Amiga 500.

When I got in my late teens I got a Play Station for convenience and racing games. It just works, and that's still true today. Want hassle free gaming, get a console. Want to mod and tinker with games, get a PC. I play (and debug) FS2020 on my gaming laptop where I also prefer to play point and click games (like The Big Con currently playing) and enjoy hassle free gaming on console, currently on PS5 (currently playing Ghost of Tsushima and Tlou2). God of War is a game I would rather play on console. HDR just works, all the settings have already been optimized, don't want to mod it.

It's great to expand the audience bringing more games to PC (And vice versa). But you can always tell where the roots of a game are by the UI. So I stick to playing stuff that works better with KB+mouse (+flight stick +add ons) on my gaming laptop and the rest on consoles. I can't imagine playing FS2020 on Series X, just not having little navmap running alongside kills it. (plus I can play the big con during cruise with alt+tab, running two games at the same time works fine). And I can't imagine getting the same experience out of God of War on my laptop. (Unless I connect it to my TV, get it all fine tuned to run at even pace without Judder, use a controller, get HDR and sound sorted out, and Windows to stay quiet while playing, ergo simply easier to play on console)

I hope it leads to better dualsense support on PC than DS4 got.

Getting close to Schiphol. Had to google the ILS frequency for Runway 27, inputted it into the on board flight computer (A320) with keyboard and mouse, so much easier than with a controller. Very cloudy approach, low visibility, good to have ILS! Amsterdam right now 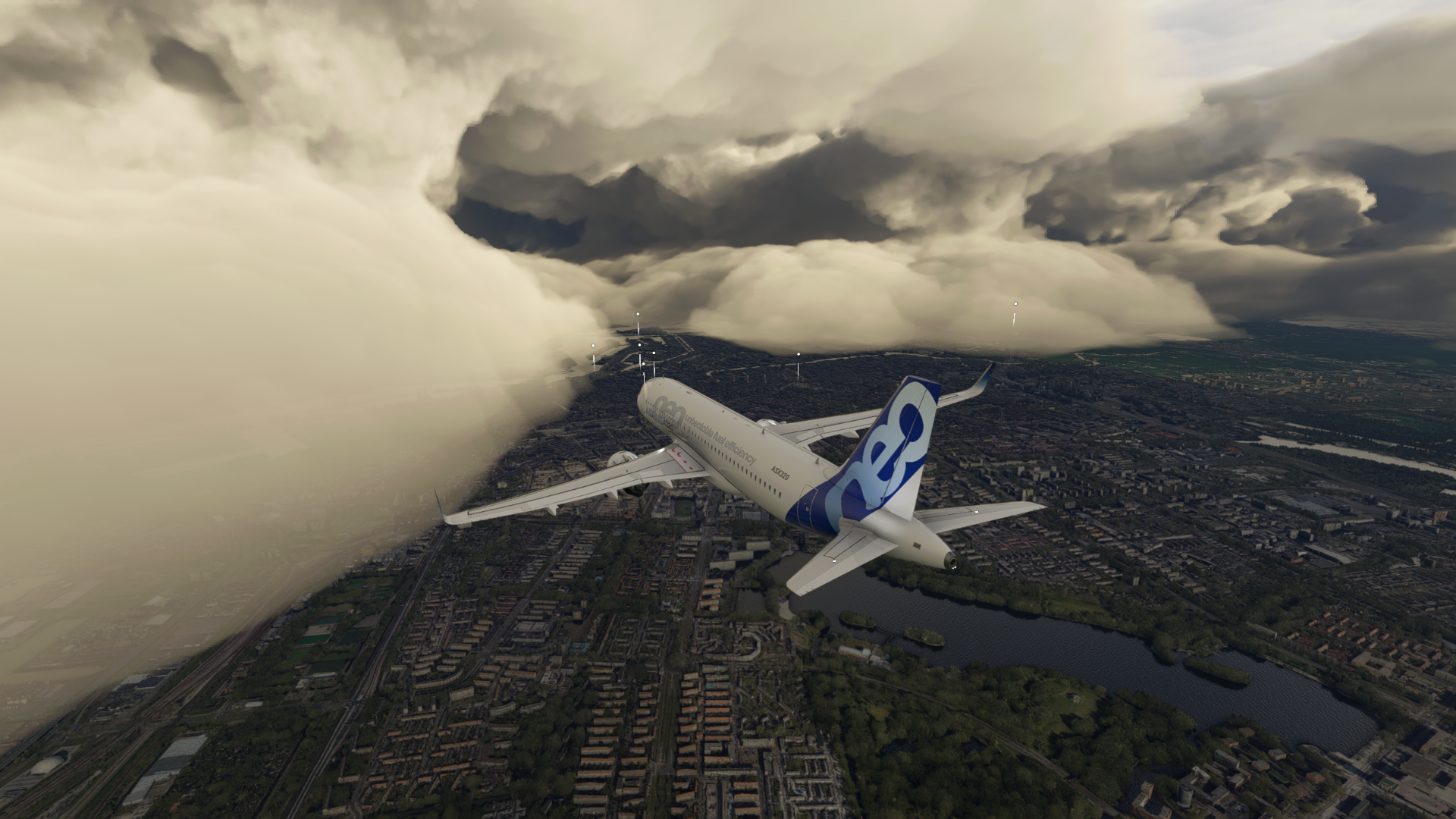 Makes quite some sense considering Microsoft has made the PC + Xbox combo redundant and the people that haven't bought a PS for these games was most likely not gonna purchase one anyways. Might lure some PC gamers to buy a PS5 to play the sequel because GoW is a masterpiece.

It isn`t that because have a PC can buy a console, it is that in general the people that builds a gaming PC (with a single graphic card costing more than the whole console) in Brazil won't be troubled by buying a console as well to the point of complaining only bought a console because that game and now is feeling ripped off. And if you could expend 6000 over one year for your PC, will you say you couldn't buy a PS4 and pay in 12 of 150RS or less on the year after? You may not have the need or wish, and as I also said, that same person if bought only for GoW could sell the console afterwards and would have costed a fraction of that, so I don't buy that narrative.

And sure you can do a lot more stuff on PC, but let's be real that is just a validation, because besides people that use professional grade very have SW on the PC, they don't need a gaming RIG to do work, surf the web, watch stuff, etc. A PC of 1k R$ would suffice, so at the time 1k for PC and 1.5k for PS4 would be less than half of what you put on PC. You bought the PC because you preffer it, just that, on cost discussion PC won't really win.

Oh, you were talking about those people uhh, throwing their game in the trash (obviously only theatrically) because their exclusive isn't exclusive anymore? I felt like that was coming mostly from Sony fanboys and not people who have gaming PCs. Either way yeah that is pretty silly.

As for me, personally I actually couldn't afford anything after my PC, because the pandemic started just as I finished building it and I haven't had a steady income since. And while I don't need a gaming PC for work, it does help a lot to have a decent one as it allows me to get things done in a quicker and more efficient manner. And to be fair, the audio software does use a lot of CPU power. Sure, for most people a cheap PC can be enough, but it will be a problem for anyone doing actual work on it, which is the case for a lot of people.

Ultimately, yeah, the reason why I spent big on a PC is of course preference, I decided that was worth it for me. Whereas a PS4/PS5 is something I've only ever felt interest in due to a few specific exclusives, so if those can come to a machine I already own, that's just great.

Well the way they post their complain on the reclameaqui would seem like they are PC gamers instead of Sony fanboys since they are sayin they only bought PS4 because of GoW, if they were Sony fanboys they wouldn`t have bought only for one game =p

But yes they were ridiculous

Sure if you are already going to build a PC that you like to game on it will serve for other stuff and make your work faster/easier, and well the CPU itself (for your audio would cost you like 1k more or less, the GPU would be the bigger problem).

And your condition is very different from other people. Because as you said, you have a PC for your reasons and the selected games that you were interested if they go to PC is a bonus it isn't like you would go there and buy a PS4. And I would say you luckied out building your PC pre pandemia because the prices in brazil skyrockted hard.

PS: this reminded me of some crazy person (which you aren't) justifying buying a iphone 13 because it worked as gaming smartphone, to work and etc and saying it made more sense than having an average/medium android phone and a middle range PC or console.