Social Democrats should be able to work with Free Democratic Party (pro-bussiness, less socially conservative, than CDU/CSU).
And with climate change becomeing a bigger and bigger, issue, working with the greens, probably isn't a bad idea politically.

3 - SPD + CDU/CSU  (2 party only, but social democrates and conservatives, often dont have so much politics that overlap, Limits what you can do)

4 - SPD + CDU/CSU + Greens (this way, if some of CDU/CSU, arnt willing to follow suit, you could get by with the extra from greens)

There are other options than "Groko" (the "big/great" coalition between SPD + CDU).
Differnces in political views, imo, make Groko, a lausy combination.
Your basically deadlocked into not really doing much, changeing much, of anything, because of the opposing views from both sides.
So the only thing that gets done, is the obvious stuff that every sane person agree's needs doing.

Hopefully that doesnt come to pass.

Its fun that theres parties that have views that go in every direction.
You have the greens, that are very pro EU, and protectionism, and enviromental protections/laws ect, want the world to act together to fix issues.
You have the AfD that are like very anti EU, immigration, populist rightwing party, that care nothing for the enviroment, or other parts of the world.

These 2 parties views, are so extremely differnt, you couldnt have them in the same coalition.

To a lesser degree, SPD and CDU/CSU, and how they view, what society should be, in terms of what goverment provides society, and how much is spent on it.
You have a left, more "left wing" than SPD (the left/Die linke), and a right wing, more right-wing than CDU (AfD).


I think this is the best way a funktioning democracy works.
Theres something for everyone, whatever belief/views you have, and when you vote, then they group up and work together towards things.
FPTP that the USA and UK have, seem so much worse, you basically only have 2 parties (and both are more or less conserative in their views).

In the case of the U.S, where parties are actually weak (the concept of "party whip" exists only because members don't necessarily have to vote with their party, unlike in many other countries) you can sort of think of these coalitions as existing before the election, and people vote on which coalition should succeed.

It is better to think of the American "parties" as more like coalitions, formed in broad primary elections before the general.

You basically have a far-right nationalist faction which constitutes a majority of the Republican Party, a center-right liberal-conservative faction which represents a small minority (and the former plurality) of the Republican party (Susan Collins, Lisa Murkowski)  -- some of them are in the Democratic Party (like Joe Manchin), an analogue of the FDP/mainstream European liberal parties in the right-wing of the Democratic Party represented by the Bloombergs and Hickenloopers of that party, who support conservative liberalism, to their left is the plurality of the Democratic Party which is its social liberal faction -- which prescribe "progressive liberalism" and "saving capitalism from itself", and then the last third of the Democratic Party are its social democratic faction, which has only grown to a third of the party since around 2016, but very rapidly so. Before then, this faction was probably about 15% of the party.

Since the U.S is shifted right-ward, more explicit socialists don't exist in national electoral politics -- but extra-electoral socialism (anarchism, communalism, cooperativism, libertarian municipalism, syndicalism, etc.) has had a presence in the U.S in the past and seems to becoming popular again.

I still prefer there to be explicit ideological parties that form coalitions after the election, but it is useful to think of the coalitions as pre-built in the American form of FPTP where parties only have weak influence on their members' voting records. 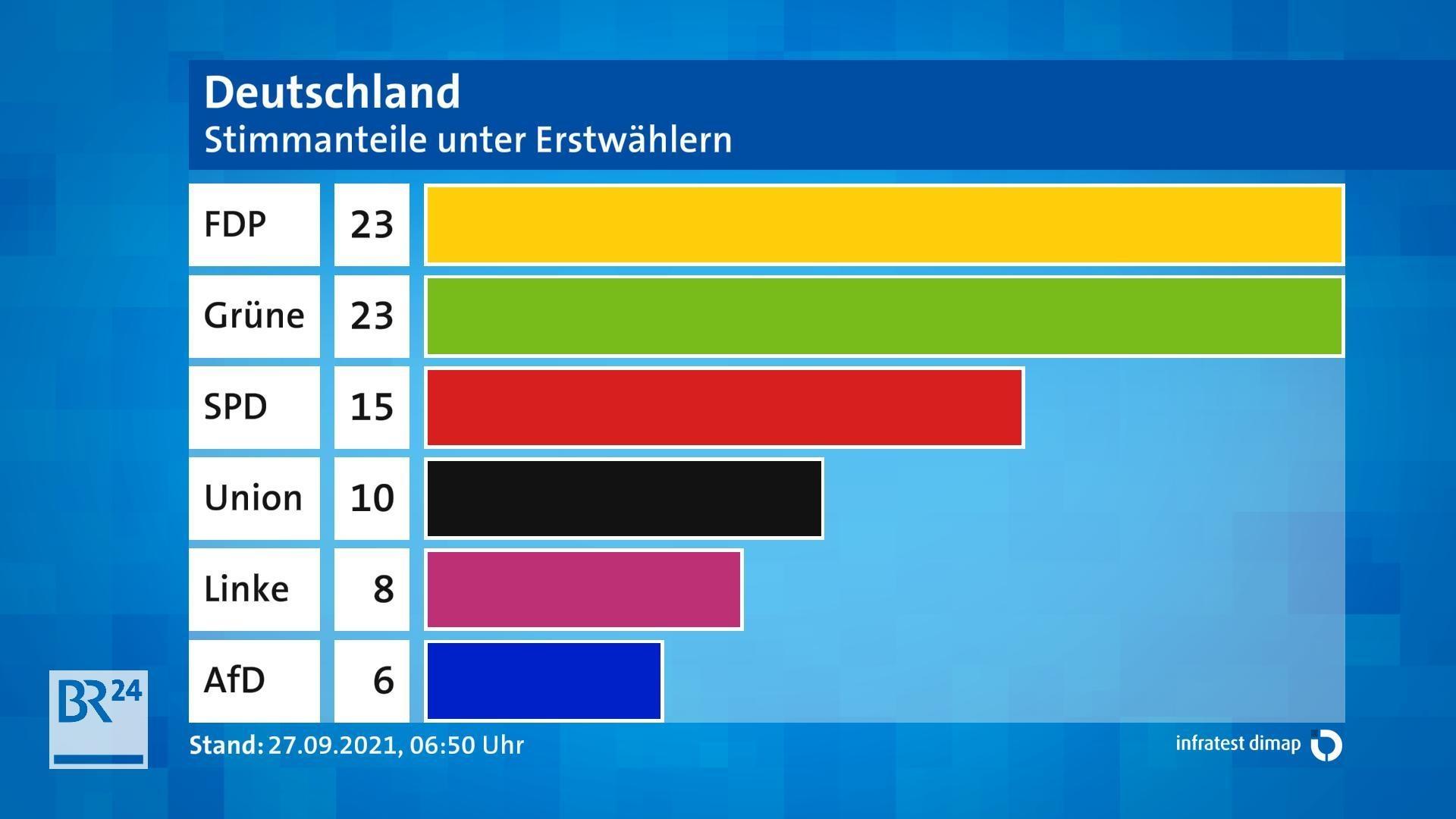 That doesn't bode well for the Union in the future. SPD is a bit better off, but that's still weak.

I'm surprised that the FDP is so high first voters and the Linke so low. I was expecting Linke o be around 10-12% and FDP around the same percentages.

Also, 15% voted for the small parties that are below the 5% threshold, showing that there is much distrust with the established parties. Probably also the reason why the FDP is so high with them.

As some have noted, the FDP did actually a lot of microtargeting on social media, especially Instagram. That might explain a bit of their success with young voters.

This is just so pretty. We had the election. If you remember, I said three major parties declared politicians as candidates for chancellor. Not that we elect the chancellor, but parties declare they will make this candidate the one, if they win.

Well, let's start with Annalena Baerbock from the Greens. The Greens have two chairpersons, Baerbock is one, the other is Robert Habeck. Before the election they decided that Baerbock goes for chancellor. But now:

Now according to informations Robert Habeck will become vice chancellor if the Greens join a coalition. Not Baerbock. This points to an internal power struggle. Why did Annalena Baerbock became vulnerable? After all the Greens have a record result as never before in their history. But... in the polls they were at times even better. And the loss from the polling high is attributed to Baerbock. I am not sure if that is fair, but that is what happens.

Well, the other parties do better, right? Right?

The media is pushing rumours, that internally in CDU/CSU Markus Söder is brought up as a possible chancellor of a coalition of CDU/CSU, Greens and FDP. Not their candidate they run with in the campaign, Armin Laschet.

Markus Söder is chairman of the smaller of the sister parties, the CSU. The result for both CDU and CSU was disastrous, so Laschet is getting a lot of heat. But again, only two days after the election they already abandon their candidate.

Well, we have one candidate for chancellor left, Olaf Scholz. His party became the strongest one, they are most probable to lead the government. So they will not abandon their candidate? Well, the party isn't, but something else happened just shortly after the election: in Hamburg his home city the office of the district attorney made house searches at multiple SPD-politicians that were close to Scholz in his time as mayor of the city. The reason is a banking scandal about Cum-Ex deals, that had backing from politicians. This is pretty close to Olaf Scholz and he was connected before to this stuff. So it isn't exactly a good look.

So, we get a lot of reasons to trust the politicians.