For me the only way she could really believe she was telling the truth (for physical, psychological and sexual abuse) would be if she isn't sane (well she doesn't look much normal) but her lawyers didn't go that way as that would also destroy her future career.

And considering that even a fake fundme raised 1M in like a day to pay for her lost cause I think that even with everything that happened she will be back on screen in a short time due to pressure from some movements.

Here is the actual letter for point of reference: 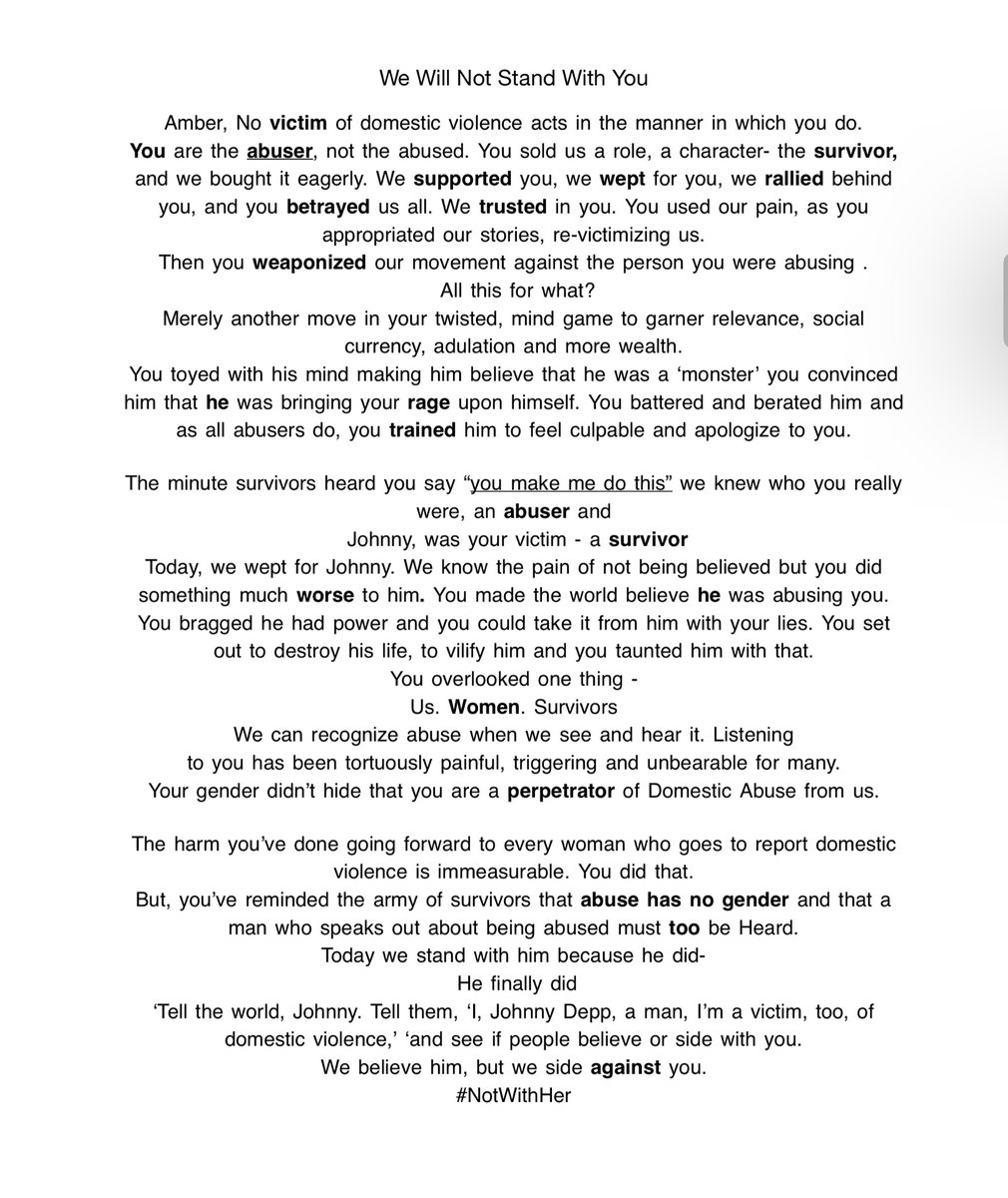 "Amber, no victim of domestic violence acts in the manner in which you do. You are the abuser, not the abused."

What a good letter and my sympathy goes to people that truly suffered abuse.

I have no words for how ridiculous that "point" is.

Unfortunately, there are now rumors floating around that WB did a test screening where Amber Heard's character Mera appears for 25 minutes of the film, more than double the 10 minutes the WB exec claimed during the trial. Here is hoping the test audience loathed the 25 minutes of Amber cut.

I terms of legality, it's not ridiculous at all. In defamation cases malicious intent is integral. Being wrong is not the same as being malicious; if she genuinely believed herself she lacks the malicious intent behind defamation. That's just how law works, it's always more complicated than you think it is. Lawyers get paid ridiculous sums of money for a reason.

No it's quite ridiculous as it doesn't hold up to the case in question. If the assertion is that you can't prove malice "because she believes her own lies" it doesn't hold up to the evidence presented in case. You can impeach a witness to show they are being knowingly deceptive. The best example of this is the 2016 Deposition from the UK case in which Amber lies about tipping of TMZ. She literally catches herself telling the truth in that video. So she is being knowingly deceptive. She does not believe her lies are the truth. Moreover her testimony in the VA case often contradicts her previous testimonies under oath. It's why the cross examination of Amber by Camille Vasquez was so devastating to her case. She would ask Amber a question, then show that Amber was lying with her very own words. That was the universal moment in which I saw the various lawyers live streaming the case switch from "Johnny doesn't stand a chance of winning" to "Johnny is going to win his case."

I'm no lawyer. That said, when I can watch several lawyers make an assertion. I'll defer to their wisdom. Particularly when one of the lawyers is practicing attorney in VA. I'll take his word on the matter over a poster on the VGChartz that seems to have a contrarian take on the issue for the sake of being contrarian.

It might've just been them testing the waters for what they can get away with, and judging by Twitter reactions, the response to her was highly negative (big surprise there), but if she's in it for 1 second, I won't be paying to see this, I don't care if they kill her off in the opening scene. Maybe if they acknowledged they done fucked it up with the whole JD situation and issued him an apology and potential film roles.

Oh, and speaking of WB fuck-ups, the whole Ezra Miller saga continues to blow up in their face and make them look worse by the day:

The parents of an 18-year-old from North Dakota have obtained a protective order against “The Flash” star Ezra Miller.

But the teen’s parents and law enforcement are having a hard time locating Miller to serve the actor with the order. https://t.co/B89xAGTEGx

Nice going, WB, you fucking morons. You fired JD based on baseless accusations that have now been proven (and I mean legally, court-of-law P-R-O-V-E-N) false yet you give this guy a pass without so much as a peep after he was caught on video assaulting a woman (!), and where did that enabling get you? You're essentially harboring a fugitive who damn near cut a woman's eye off after putting a giant laceration in her head, threatened and stole from a live-in couple, threatened police after arresting him for disorderly conduct and groomed a 12-year-old (!) and ran off with her years later!

They basically have two options at this point: bury the movie or spend whatever it takes to replace him with Grant Austin. Whether that be CGIing out his face and redubbing his lines, reshoots, I don't care, they can't show his face in a millisecond of footage at this point. That would be a PR nightmare, it'd be worse than the Slender Man controversy. They're literally aiding and abetting at this point by keeping him in the film, there's no sugarcoating it. If they want to even pretend to care about moral or artistic integrity, either cut their losses (while also incurring them financially) or don't release the Flash movie at all, and WB can only wipe their hands of this debacle by doing one or the other. The minute that trailer goes live (and it's rumored to be dropping soon), they're gonna get massive amounts of backlash (maybe moreso than keeping Amber in AM2), obvious reasons.

Another way that they could save some face would be releasing a note that they won't ever hire him ever again, but since this movie is finished they are going to release as is BUT EVERY SINGLE CENT OF PROFIT WILL GO TO SOME NGO THAT DEALS WITH VICTMS OF ABUSE.