I think this is the reason why both are adamant at not going first. Sony did prepare everyone saying that PS5 is going to be more expensive than consoles as of late. Xbox too, since the BOM is most likely at least equal to that of the PS5. All points to high price points for both consoles and neither of them want to break the ice.

Calling it... $599 for both consoles. Prices will be revealed next month.

I'm trying to find his actual own words, strangely no clear links, but eh.

Edit: Found some of his own words on the matter, he never said he "made it all up". He did however say that it was just anecdotal statements, that he's unedcuated on the topic and can't understand the technical details and his reason for sharing them is he thought the forum was too "one-sided". 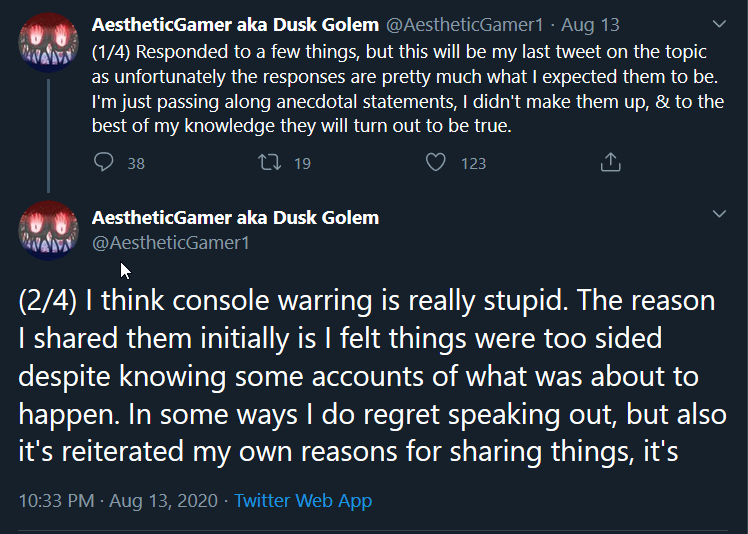 Yeah, what he says there does not equal "making it up". He is basically saying that he is not a tech guy (which makes sense, he is an indie game designer, not a AA/AAA programmer), but by fake 4K he assumes his sources meant that some 3rd party devs are going to be aiming for less than native 4K/2160p on PS5 (say 1800p) and then use techniques like temporal upscaling or checkerboard rendering to get up to 4K, whereas Xbox Series X will hit native 4K on those same games. Which is all perfectly logical, PS5 has about 2 tflops less GPU power than XSX assuming that the variable speed GPU works as intended by Cerny (more than 2 tflops less if it doesn't work as intended), so it's logical to assume that we won't see resolution parity on too many 3rd party multiplats next-gen, just like we saw very little resolution parity on XB1 vs PS4 or PS4 Pro vs XB1 X.

He didn’t lie about anything, he just said he only brought his information up because of the console warz. Whether the info is legit or not is another story.

$600 seems too high. It's a far cry from a company that once toothed with the idea of offering console for free and make money back with software.
But who knows, right now, Microsoft strategy place the Xbox hardware only as an option to be a part of Microsoft ecosystem. While console sales are still essential to this, selling more than competition is not so it's possible that Microsoft decide not to take a loss on each sales. Even then $600 seems a stretch as it place the series X well within profit area from the get go.
I sure hope for a $500 price tag as it would mean 600$ CAD (same as Xbox one X was)
If they go with $600 tough, it would probably mean $800 CAD (At this price point I'll pass for sure).

If both are $600 then that will be a first and probably just handed the holiday to Switch new hardware or no. Man, I miss 9/9/99 $199. This industry is just so bloated now.

There's no way either console is going to be priced over $500.

This is all but certainly false.