The 'No's are split between Switch being gen 7 or gen 8 (and they can't explain why Switch Lite belongs to the same gen as 3DS) therefore 'Yes' wins by default.

You are reaching. This is so over the top and unnecessary reasoning for console generations, we will only have 3 consoles for the following years ffs, but anyway...

I can see that you are kind for the type of tech that Sony and MS bring every gen so you buy this marketing stunt of "NEXT GEN" so you all will keep this classification and messy timeline till the end, so I won't bother with this conversation anymore.

See how much clearer things become when you apply a little bit of logic and common-sense? 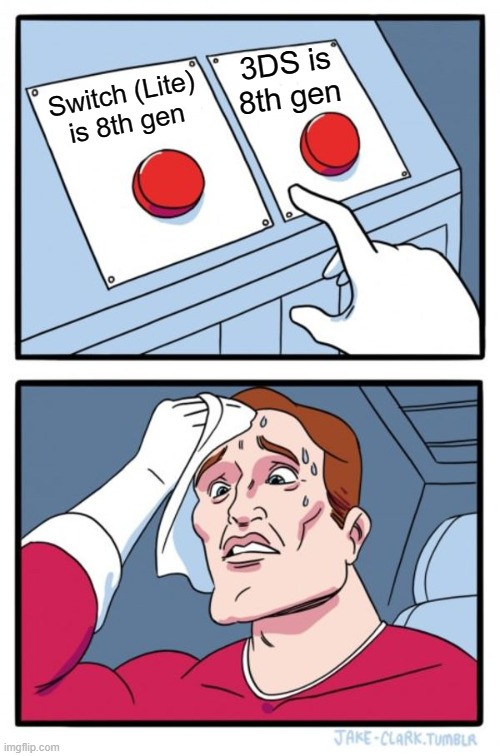 Switch Lite is the same gen as the 3DS because generations are defined by power.

Power is also the reason why the PS4 is in the same generation as the 3DS.

EDIT: The Wikipedia page for the eighth generation of video game consoles is hilarious. As if it wasn't already bad enough to make the launch timings cover 2011-2017 by wrongly labeling Switch as gen 8, they even run a handheld-only section that has launch timings from 2011-2019 and still don't realize that something went very wrong.

"Although it is a hybrid console, Nintendo classifies it as "a home console that you can take with you on the go".

Nintendo has never used the word hybrid afaik so it's pretty bold of Wikipedia to declare Switch a hybrid without any source especially when Nintendo have repeatedly said “Nintendo Switch is a home gaming system first and foremost,”

It can't be a handheld anyway because everyone (except wiki) knows handhelds don't have detachable controllers.

One thing about saying the Switch is 9th gen. That means they came in dead last in the 6th and 8th gen. That's 2/3 losses to Xbox.

The Dreamcast finished last in the 6th gen. But yes, Nintendo finished behind Xbox twice so far. That's factual.

Spoiler!
How many people will take the second paragraph dead serious?