It's seems like this should have a simple answer but it doesn't. I'm a black male and a former police officer. I'm just going to make a few comments based on my experience. The area I lived in was about 50/50 black and white with a small percentage of "other" races.

-We would arrest roughly half and half. Yes, often for different crimes but still, on any given month, it seemed about the same, give or take.

-Despite the previous statement, it seemed like the jail held like 75% black and maybe 25% other. This was just my area so take it with a grain of salt. I did notice that black people often couldn't bond out of jail, no matter how low the bond was.

-On a select few occasions, my arrests just disappeared. Never heard anything about them again. Never went to court. No idea what happened. I have seen people walking out and back on the streets before the paperwork was even done. I'll leave that one alone.

-White people on the whole seemed more cooperative. Yes, I've had to fight and chase after them but if somebody was going to resist, I'd say 2/3 of the time, it was a black person.

-White officers did seem to be more afraid of black people. Often seemed like they were over reacting. Maybe it's because they were dealing with another race and they just didn't know how to relate. I don't know.

-On occasion, i got assigned certain tasks simply for my skin color. Even got credit for certain warrants even though I played a small role. In some ways, I think I was used for political reasons. Working clubs, a dinner for MLK's brother, talking to kids, they made sure I was present.

-I have personally seen black people treated different. Over time, some cops start feeling like everyone is guilty of something. It's just something that slowly creeps over them. Years of dealing with people at their worst. I think they start hating people. They say they don't but you can kinda pick up on it.

-Maybe 60 years ago, a generation of blacks were denied many rights and education. That spilled into their kids and their grandkids. Think of what life would be like if your grandparents had to start with almost nothing (and who's to say they didn't? I know lots of white families that have struggled and still struggle). That translates to their children and, even though things eventually changed on paper, a lot of people's hearts stayed the same. There's still that hatred being passed down. I've seen it from both blacks and whites.

-long post. Probably rambling. Probably answered none of your questions. I get scatterbrained sometimes when I have a lot to say and only a few minutes to say it. Gotta go to bed. I'll just say that people want things to get better/change but often don't have the words to articulate exactly what they want. That doesn't make their feelings and complaints invalid. We all need to compromise and maybe have a little empathy.

It's easy for many to say "Everyone in that group is wrong and they need to change" rather than admit that "Maybe my group is part of the problem". And people get defensive so quickly. But, nearing my mid 40s, I can say things are mostly better than they were when I was in my 20s. They're better than they were when my mom was younger. My mom's youth was better than her grandparents. And I feel like we're on track for things to be even better...if we just focus on the good.

Or maybe I'm just naive. Have a good night.

I didn't say you shouldn't address looting. I'm saying your reply, copying what you said to Mzuzek, in large part was not as relevant an answer to me, because you're covering some subjects I didn't touch. So then I have to jump into the middle of a discussion I never brought up, and don't know how it started.
If you could cut out the rebutals to the arguments I never made next time, and just keep the ones relevant to my post, that would help.


Though regarding the looters/killers you adressed. You followed it up with"by these so called ''protestors of black rights''".
By conflating the peaceful protesters with the rioters, looters and anarchists, —erasing any distinction between the criminals and the citizens exercising their 1A rights—you can justify any action against them.

These people do not diminish the cause that is being protested either, which is police brutality.
And the police committing crime is not the moral equivalence of the ones looting and being violent. It's a much more serious problem. Especially when it's systemic, like covering up their badge numbers and removing the bodycams, etc.

There is no question about what police should do with criminals.
But what should peaceful protesters do vs violent abusive cops? How do you find out which cop shot the bullet that took your eye out while reporting the news?

Of course. But without backhandedly equating the gravity of the problems with "both sides", when one issue warrants a lot more scrutiny.
This is how the police behave during a police brutality protest. When they're supposed to be on their best behavior, knowing everyone is watching and recording them more carefully than ever before. That's what's so shocking to a lot of people. I expected a few incidents to happen, but I did not expect this. This is unprecedented. Normally people would have gone home after the original officer was arrested and charged. But it's still escalating.
Around the world even. Here's New Zealand: 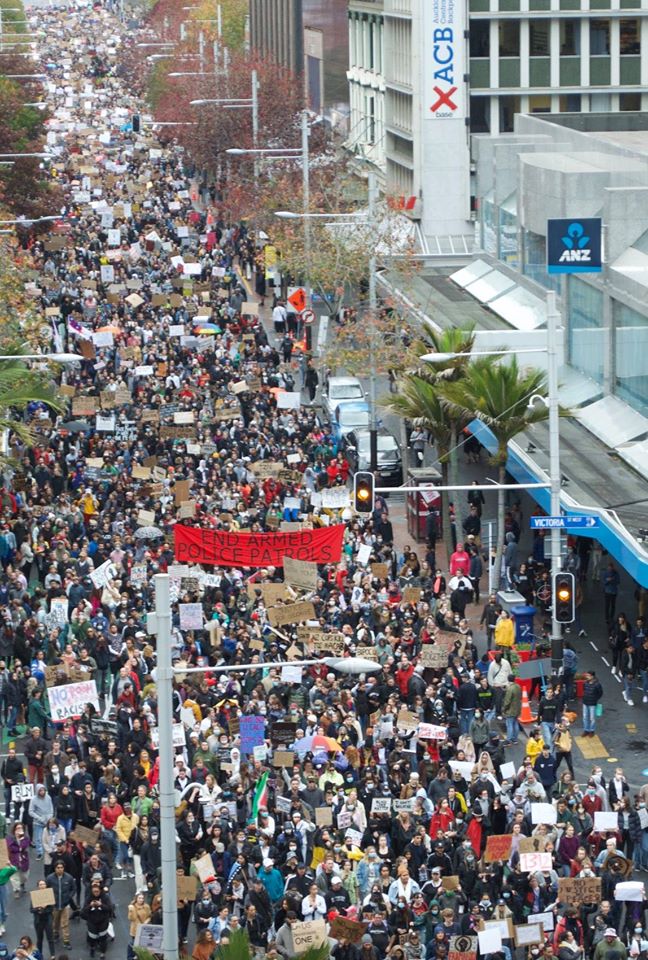 Probably not just because this was yet another murder of an unarmed black man. What's different this time is how the police reacted.

Though I find it hard to believe that unarmed civilians (which is 99.99999999% of them) are instigating violence against the police at the same rate that armed police officers are instigating violence against civilians. Because the cops are armed and geared up while civilians usually aren't. If we count things like throwing bottles I can see that. But since the police are using batons, bullets, teargas, etc, I was thinking about things on that level coming from the crowd. It should be significantly lower.

Though either way, the issue is that it's the police doing it, who took an oath to protect and serve. This is their job, and should be held to a higher standard than a random Joe in the crowd.

You can't vet who shows up to a protest, but you can vet who joins the police force, how they are trained, and how they are supervised.

end of the day the protests and the accompanying rioting/looting/arson/anarchy will just bring unnecessary death and cause lasting damage to minority areas.

-coronavirus will definitely spread more in these areas as a result, disproportionately affecting people of color

-burning down and damaging of local businesses will just bring long-lasting economic destruction and stagnation(who's going to want to invest and rebuild in a financially risky and dangerous area?)

-the economic problems will exacerbate the drug use and crime rate there, causing residents with the means to leave giving you a negative economic and increasing crime feedback loop

-cops being demonized and vilified will just bring about police being less likely to show up and intervene in troubled minority areas, thus crime and homicides go up further

look at what the locals think about chaos that went on

Almost everyone supports peaceful protests.  but obviously, the vast vast majority of the locals DO NOT want the rioting/looting in their neighborhood. Funny that some people here are condoning, excusing and giving the destruction a pass.

Peaceful protest does not work.  Without the violence women would never have had the right to vote.  Big screen TVs are owed to people! If Gandhi hadn't kicked asses the Salt March would have failed. Burning down someones shop is a reasonable statement.  The Montgomery Bus Burnings was the only way to get people's attention and bring about change. Equating opportunist to protesters and using the justification of the latter to excuse the former is the only logical stance to take.

This thread will be closing soon.  The title violates the forum rules on using improper language in a title and it's redundant. We will be closing the other threads as well to consolidate this discussion into one Official Thread.  This will enable better flow of discourse (rather than multiple threads and having to bounce between them) and easier moderation.

For anyone that already has an ongoing discussion and you are wanting to continue it or are awaiting replies, copy your posts into the new thread to continue them.

Copy anything you want to carry over.  We're just consolidating given that the discussion is taking place across 4 different threads.

Hopefully BLM momentum will continue and real change will happen.
An end to police brutality and corruption.
An improvement in police treatment of non-white people.