I want to emphasize I'm not trying to downplay PS5 here, I'll state again for the record I am impressed by its results in this demo.

Those opinions are mainly fruitless because it just exposes everyone's stake in it. Very much like the meaningless teraflop debates. The PS5 is the weaker overall device, no denying it, cleaning it, what have you, BUT, it will still be able to handle tasks in ways that the XSX will not. No denying that either.

I get why some are look too far into from both directions, but the hardware is the hardware. No different than when a 1080Ti wins a few points over a TITAN X in a benchmark here or there. Those very rare instances will never remove the latter's very real superiority (and those two devices are even further apart in power than the two upcoming consoles).

Pretty much, yeah. I'm sure the debate will rage on for years to come; might even get interesting when we have actual games to go on. Now we've seen what PS5 can do the ball is really in Microsoft's court to show a similarly impressive example of what XSX can do.

For the average person, that is pretty much what it sums up as. SSD = Good. HDD = Bad.

Correct. RDNA does come up short against Turing.

But there are edge cases where RDNA will out-edge nVidia, AMD's main dominance since Graphics Core Next debuted has been asynchronous compute and RDNA still does really well there... Not as well as Vega, but still really well, when AMD's OpenCL compiler isn't being shit that is.

Once the next-gen games start rolling out and we can dissect the real-world implicated differences in actual games (What these devices are meant for!) then we will have an idea between platform differences.

Keen to see what the Xbox Series X can do, Microsoft needs to demonstrate that appropriately.

Not sure if folks remember a topic I hosted a few years back, but one of the things that made me so happy with the UE5 demo is it showed exactly what I said it would — that we would use more and more polygons on faster drives to create instances (instances — this is mathematically important). Rocks are one thing, but the next gen consoles will also allow, what seems like, infinite bushes, shrubs, trees, etc...

Here is that phenomenon rendered on my PC using about 6.3GB out of 24GB of the same RAM found in the consoles, albeit mine is running at a higher clock than those will, but the point remains (this is the updated version of my scene from 2016 in that link above, using DirectX 12 Raytracing [GI, Reflective, and Shadow plus the instancing]).

The final render (in 4K) is the kind of quality you can expect when those techniques are combined with DoF to create something that is quite filmic, but will actually be running on the graphics engine of the game in your device (I used the CryEngine 5.6 in conjunction with UE4 to create some assets). It is rendered in Iray, a PBR engine that tackles raytracing and DoF in effective ways, but I mainly used those gaming engines to show you what was possible without the heft of past generations (I could have pushed this scene far far more if it was all about an exclusive for PC, but consoles are gonna be on this level and that's thanks to their GPUs (which are 2070/2080 equivalents) and those super fast NVMe drives (this was rendered using my 560MB SATA SSD while the consoles will top that by at least 5x). So, the instancing on the SSD makes that possible, coupled with the fast memory of their GPUs. What would have been mathematically impossible before is a reality to come very soon. I just wanted you guys to have another visual representation of what is going on in that UE5 demo. You may not get that out of your consoles immediately at launch, but within the first couple of years, no doubt.

Also, keep in mind, my scene was not rendered with 8K (8192x8192) maps, as was the case with Lumen. So, the textures in my scene, while great, could be 2-8x better (given most of those textures are not even 4096x4096 and are simply slapped on instanced assets). And, the whole scene is 1.9 million triangles (32 million less than the Zbrush imported statue in Lumen, and that's just ONE prop ) — they used more in the scene, making for over 16 billion on just those props alone)! He stated "over hundreds of billions of triangles".

Before the 8th gen launched, I asserted that one of the big tech focuses moving away from the 7th gen will be geometric complexity, we saw that with 150x-300x improvements in geometry performance and games looked stellar as a result. - Many games still took a baked lighting approach though, some didn't.

I assumed the 9th gen was going to be all about lighting, but it seems the SSD's are enabling some impressive texturing and geometry gains as well.

But I am also excited to see a return to 3D positional Audio, I haven't been this pumped about a console generation in a very very long time.

Alrighty, I am back in the city with semi-decent internet and have finally been able to watch the full 9-minute version in full HD.

Updated thoughts? Still impressive as hell. The richness, intricacy, and absence of the typical video-gamey artefacts and limitations puts it head and shoulders above the best looking graphics of PS4/Xbone.

I don't think it's quite as big as the leap from PS1/N64 to PS2/GC/Xbox or PS2/GC/Xbox to PS3/360, but it's definitely bigger than the last generational gap.

Couldn't be any more clear, for those with weird conspiracy theories: 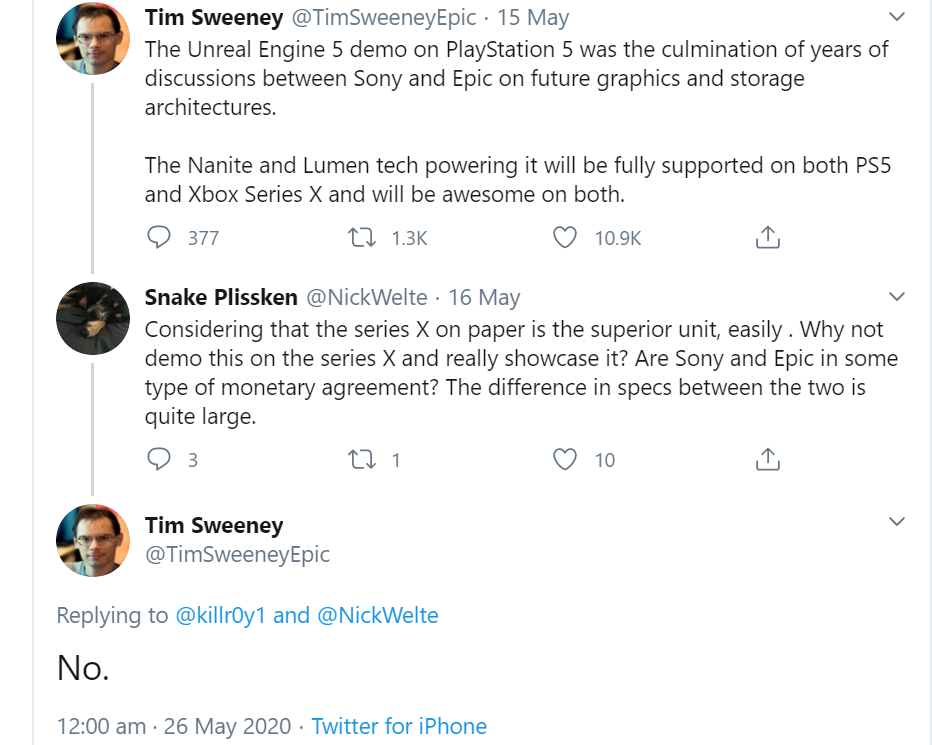 The difference quite large? No, it isn't. Even smaller than the Pro/X in fact. Good on Tim to put it so bluntly.

For PC enthusiasts, the exciting thing about the PS5 architecture is that it’s an existence proof for high bandwidth SSD decompression straight to video memory. Is this enough to get Microsoft, Intel, NVIDIA, Intel, and AMD to work together and do it? We’ll see!

Disclaimers:
* We judge game performance by maximum impact to frame rate, not average transfer rate or whatever. Hitches during streaming are what break immersiveness.
* This isn’t a judgment of a particular product. Rather, it’s likely also be true of an infinitely fast SSD.

I am sure Sweeney isn't quite right, but it echos a bit that Cerny was talking about. That when you put in a 100x faster SSD, they didn't want it to mean performance only went up 10x after all the overhead.

So a huge amount of work went into the I/O to ensure that it doesn't bottleneck the SSD.

Sweeney suggests that even if you had an SSD that was much faster on PC, the overhead would mean it would likely end up performing slower than PS5's. 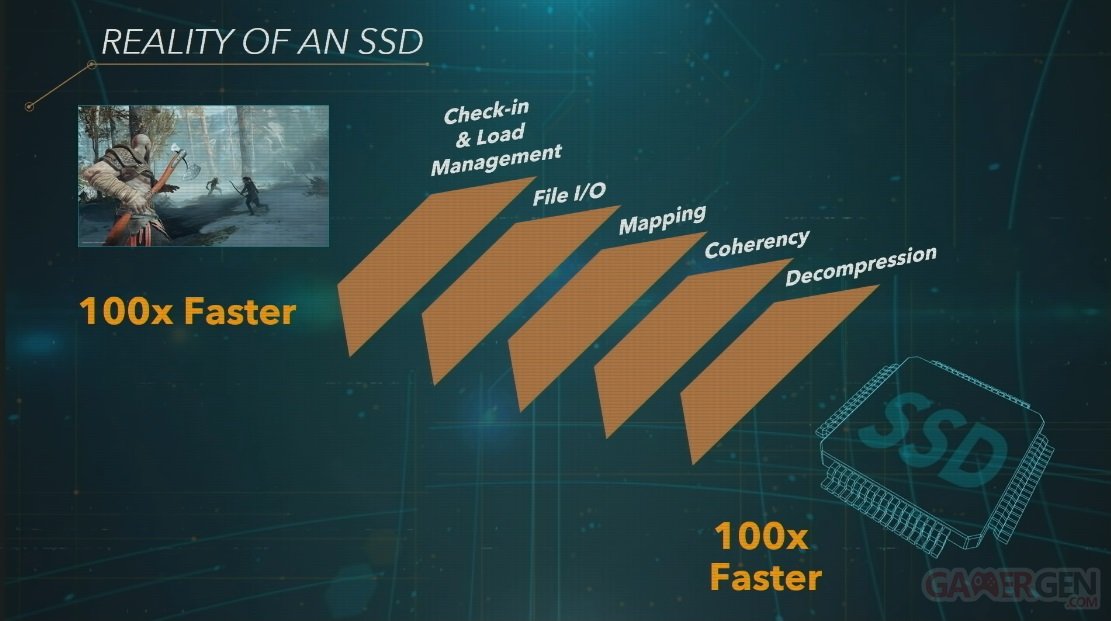 The interesting bit is that Sweeney seems more impressed by the lack of I/O overhead than he is about the SSD speed.