If civil rights could do anything about it, then this whole thing wouldn't have been put underway in the first place.

Ultimately, it's a consequence of the fear to make vaccination a must, so the unvaccinated are getting penalized at every opportunity which comes with the consequence that things get worse for vaccinated people too. The unvaccinated prove to be the biggest threat to their own cause, because their attitude isn't going to get them freedom.

But since the level of stupidity in Austria is higher than in most other countries in Europe, there won't be many unvaccinated who will give in in response to the new measures. The vast majority of them will now double down.

Yes, it will provoke backlash. I'm just wondering about how to enforce it? Here the police is definitely not allowed to stop you to ask your vaccination status, but business are allowed to require proof of vaccination before allowing entry. (Only some non essential businesses).

Lock downs never included essential businesses here, and the only thing the police could enforce was to break up large gatherings. (Not that they did or wanted to enforce anyway. Police got better things to do than count groups of people)

Masks are still mandatory here though, but those are by municipal by-law. It can change by county, as does the fine for not wearing one indoors.

Apparently the solution here to the stubborn holdouts is to start vaccinating 6 to 11 year olds next. We made it to 75% fully vaccinated and cases are starting to rise again. Never ending.

A lot of things should have happened, but then again, they didn't oddly enough, though there was always an excuse/explanation, or the guidelines and definitions were changed so it was never the same problem as understood to begin with coincidentally. What if the rates don't drop much or rise yet again?

If a parent does a poor job early in a child's development, then later on decides to 'beat the teachings and wisdom' into the child, would that be seen as acceptable? When the child lashes out, would anyone be surprised? Who would back the parent and put the child in their place in this case? Did the parent likely just make constant mistakes early on, or are they perhaps 'unfit for the job'. If unfit, why isn't child services getting involved?

The Gov and professionals had their chances early on. Forgiveness time is far over. There's a certain percentage of people, much larger then they would like, who aren't going to budge, period. There will come a point where vax pushers will have no choice to drop it. It'll be odd at that point when covid is no longer an issue whatsoever, one way or the other. 'My autonomous electric car doesn't protect me from your self operated diesel truck, so you must get an autonomous electric vehicle immediately as well', isn't gunna fly because it simply makes no sense.

We're told to get the boosted 3rd shot , for our safety . I went yesterday they told me after getting my second shot if I want 3rd shot is after 6 months. I have to wait till february.

Well, the 'justice' system seems to be on the 'beat into submission' side, which is seen as acceptable no matter what the background. Child services does get involved at some point. Kinda losing the metaphor here.

The problem comes back to the government fears the people, and people fear the government. There is no trust. Yet it's all just people trying to get by. Some people prefer a strong voice, some prefer reason/logic, nobody likes flip flop advice and policies. And saying we don't know at this time is seen as the greatest weakness. Trump went for the strong, confident voice. It doesn't matter if you're 100% right, as long as you believe / act like you are 100% right. Works often, unless you're completely wrong :/ Here we went with flip flip, don't want to cause panic, pretend we know what we're doing and change policy again next week/month.

Both strategies created a lot of mistrust, and indeed no forgiveness. Would it have been better to admit, we don't know yet, we'll keep you informed, please stay home for now. Probably not. And instead of making use of all the information people have at their fingertips nowadays, people just tend to go where there confirmation bias takes them. The problem with the internet is, there's always a group that will agree with you, no matter what.

How to go forward... Vaccines aren't stopping the spread, but do reduce severity of the illness a whole lot. Can we just let it run wild at some point? Covid will continue to be an issue, but treatments are also getting better. Getting rid of it is not a possibility, humans simply can't work together long enough for that to happen. So science to the rescue, more effective vaccines, more effective treatments.

And then the moral question becomes, can we charge for health care to those too stubborn to get vaccinated. Imo, if you don't have any good reason to refuse the vaccine, then if you do get covid, pay for the hospital care yourself. Your body, your wallet. Some states in the US will bill you for search and rescue if it turns out you were not prepared for a hike etc. Imo, the same should apply here.

Most of the people who aren't willing to be vaccinated will get it this northern winter. It's as simple as that. The others will be offered a third dose and that will likely be the end of SARS-CoV-2 as an agent measurably more lethal than other respiratory viruses, with the odd outbreak here and there.

That is the same thing that happened in past pandemics:

There was a similar pattern in the 1889 (probably coronavirus) pandemic where a lot of places were hit really hard by a third wave (comparable to "R1" above) about two years from the start of the pandemic in early 1892: 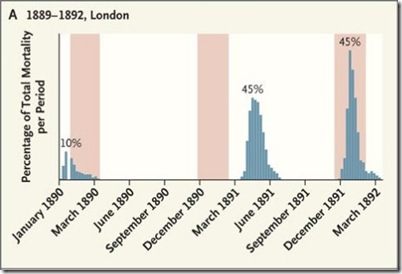 This is more or less the place we are now, except that some places are fairly vaccinated and protected against it... and others are not. The latter will be out of it more quickly (southern US, now eastern Europe) but the former should see a milder, flatter curve.

I was more so referring to politics, though it's indirect 'beating', and more mental beating. Not surprised because based on who's in power right now (more so in our slice of the world at least) because that's how those type of people are. Politically and personally. Do this please, pretty please, and if not, immediately after, then YOU WILL obey or so help me.. science! I know it all too well and there's a ton of people who won't take that nonsense, and not just because it's off putting, but because it's flat out boneheaded, and far worse because they're supposedly 'leadership'. The 'children' could really use a service at this point.

There is no winning based on how people have become politically these days. One side wants mostly truth, the other side is fine with being lied to if it's for 'everyone's own good', apparently. That can't work as it stands, and something will eventually give.

If the vax may help you, then nobodies stopping you from getting it. Since it doesn't stop you or anyone else from contacting and spreading covid still, leave anyone who doesn't want it alone. Trying to force others to get it isn't going to work, and far worse, it's just going to leave scars, and those scars are getting deeper and wider by the day. The flu and common cold, which oddly disappeared for the most part, is apparently going to just reappear so we're told. Covid lands between them on the spectrum, so it was never going anywhere anyway.

If you stop allowing 'free' healthcare to people, especially here, the lawsuits will be unfathomable. People will want every dime they were taxed back that went into the healthcare system, and they won't be paying into it going forward. No free healthcare, no healthcare taxation then. The Gov here has been brazen, but this would be Evil Knievel crossing the line and people would freak.

We're already seeing new medical services pop up who are focusing or only servicing the non vaxed. Some businesses are doing similar, or flat out refusing to segregate. If it comes to new communities being formed because of it, so be it. If it came to that, set it up so it can become a new province eventually, if not a Country. You'd have plenty of people flock there just like the shift to Florida.

I'm not talking about denying all free healthcare. But why should I be ok with paying taxes to cure someone who refused to take freely available precautions. The reason we still have restrictions is because the unvaccinated are clogging up the healthcare system and are also still more effective in spreading covid, putting my kids in unnecessary danger.

Perhaps don't charge for healthcare if you end up in the hospital with covid-19 after refusing the vaccine (for no valid reason) but add a fine. Just like when you crash on the highway while driving impaired or speeding -> free healthcare to patch you back up -> big fine / may lose you license / go to jail. Preventable problem, negligence (not getting the vaccine) -> consequences when you cause trouble for others.

Anyway BC is cut off now (due to flooding) so can start a non vaxxed community there :p

This is the same sort of rationale people use when discussing things like the consequences for smoking, or overeating, or living an unhealthy/dangerous lifestyle generally: if I take precautions and live wisely and you do not -- and you suffer the (obvious, easily predictable) effects -- why should I be made to pay for it? Why am I paying for your lousy choices?

But that's the idea, isn't it?